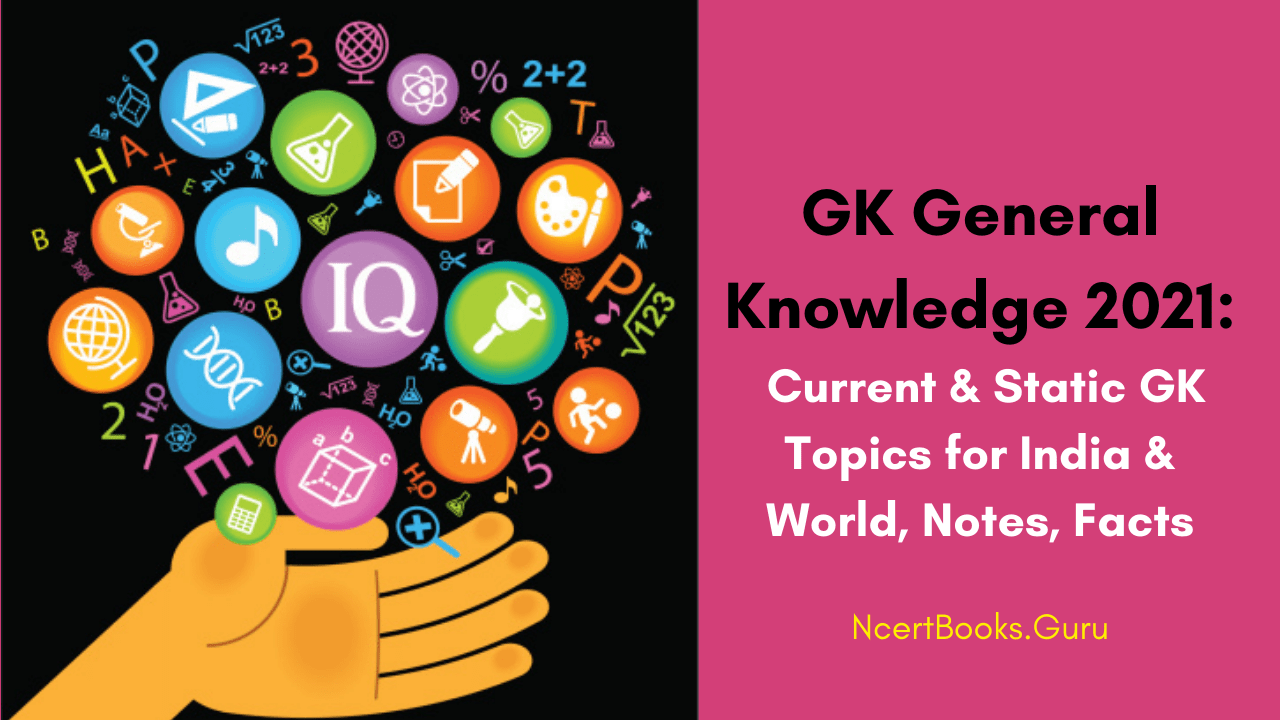 GK General Knowledge 2022: General Knowledge or General Awareness Section is taken as a high-scoring part in every competitive exam. Want to score high in GK Questions? Then, having knowledge of basic GK topics & previous year’s GK question papers is a must. List of Current Affairs GK and Static GK Topics are main portions in the General Knowlege section.

Now, aspirants can feel relax about their govt or bank or railways or private competitive exams. A good IQ about General Awareness is achieved by this article. So, you can now crack any competitive exam by an understanding of the things happening around you via the latest GK Books, Updated General Knowledge Topics on India GK, and World GK prevailing here.

If your knowledge is zero on all static insight facts about Indian states, Central Government Schemes, Revolutions in India, Indian Culture, Indian History, Geography, and its diversity, Polity, etc. Then the list of Indian GK Topics can help you improve the basic GK on them. Also, you can gain knowledge about the main facts related to India after referring to these topics of India General Knowledge and score high marks in the exams. This table contains all important facts About India GK which are asked commonly in the competitive exams. So, take a look at the below table:

Current Affairs plays a vital role in any Govt Exam under General Awareness Section. Well in bank exams, General Studies Section is mainly based on Current Affairs GK and Financial awareness. When it comes to main examinations like UPSC and SSC, nearly 20% of questions sought from the current GK. Both Current GK and Static GK are very crucial during your learnings.

Reading static GK topics aids to improve the overall score in the exam as the questions asked are accurate and direct. By remembering all these key points in mind, we have found a list of some basic yet important topics of Static GK & Current GK that you cannot leave while preparing for any competitive examinations. This table comprises the latest and updated current & static events that happened in India.

General Knowledge has a huge syllabus such as Current affairs, Major Issues, Top events in National as well as World level with clear explanation.

Students can also aware of Daily GK Updates about the world which are truly effective for your exam preparation to score high. Here, we have provided topic-wise general knowledge notes and questions of the world in the form of a list. Go through this list and find all important world GK topics in one place for efficient preparation.

Below are some of the GK questions that are asked in the previous year’s General Knowledge Exams. Aspirants can have a look at this list of different types of General Knowledge Questions asked in the exam under the General Awareness section. Also, here we have shared the table of GK Questions for Class 1 to 8 Kids for better practicing & efficient preparation for various competitive exams.

1. How many Lok Sabha seats belong to Rajasthan?

2. How many Lok Sabha seats do Goa have?

3. Hygrometer is used to measure?

4. How many players are there on each side in the game of Basketball?

6. In cricket, a run taken when the ball passes the batsman without touching his bat or body is called?

7. In which year the First World War begun?

8. Indian Institute of Petroleum is located at?

9. Indira Gandhi Centre for Atomic Research, established in 1971, is located at?

10. Indira Gandhi was assassinated in?

11. Entomology is a science that is related to?

A. Behavior of a human being.
B. Insects
C. The origin and history of technical and scientific terms
D. Formation of Rocks

12. Garampani sanctuary is located at.?

13. Each Year World Red Cross and Red Crescent Day are celebrated on?

14. For which of the following disciplines is the Nobel Prize awarded?

A. Physics and Chemistry
B. Medicine
C. Literature, Peace and Economy
D. All of the above.

If you have a good grip on current affairs and GK topics then it will help you answer in various govt exams with ease and confidence. Also, you can gain more knowledge after learning the GK Topics. Most of the general knowledge 2022 topics, GK Notes are covered here in the form of direct links, and soon we will be updating some more Indian GK & World GK Topics for scoring more marks in GK Questions. Practice more by taking the help of our privided GK MCQ Questions with Answers for all classes 1 to 12.

1. What is Static GK General Knowledge?

Static GK implies general knowledge regarding the static facts, that are never gonna change in the future. Some of the facts covered in static general knowledge are people, places, things, important days, currencies, dances, etc. Static GK is similar to History, both will never change with time.

2. Which site is best for finding the latest GK Topics?

Ncertbooks.Guru is a reliable and trustworthy website that provides all new GK topics, current affairs with an elaborate explanation and aid students in their exam preparation.

3. What is Basic General Knowledge?

Basic GK is derived in different psychology as “culturally valued knowledge communicated by a range of non-specialist media” and surrounding a huge subject range. GK General knowledge is believed to be supported by long-term semantic memory skills.

4. How can I learn GK and current affairs?

You can learn GK and Current Affairs by visiting the NcertBooks.Guru website online at any time.