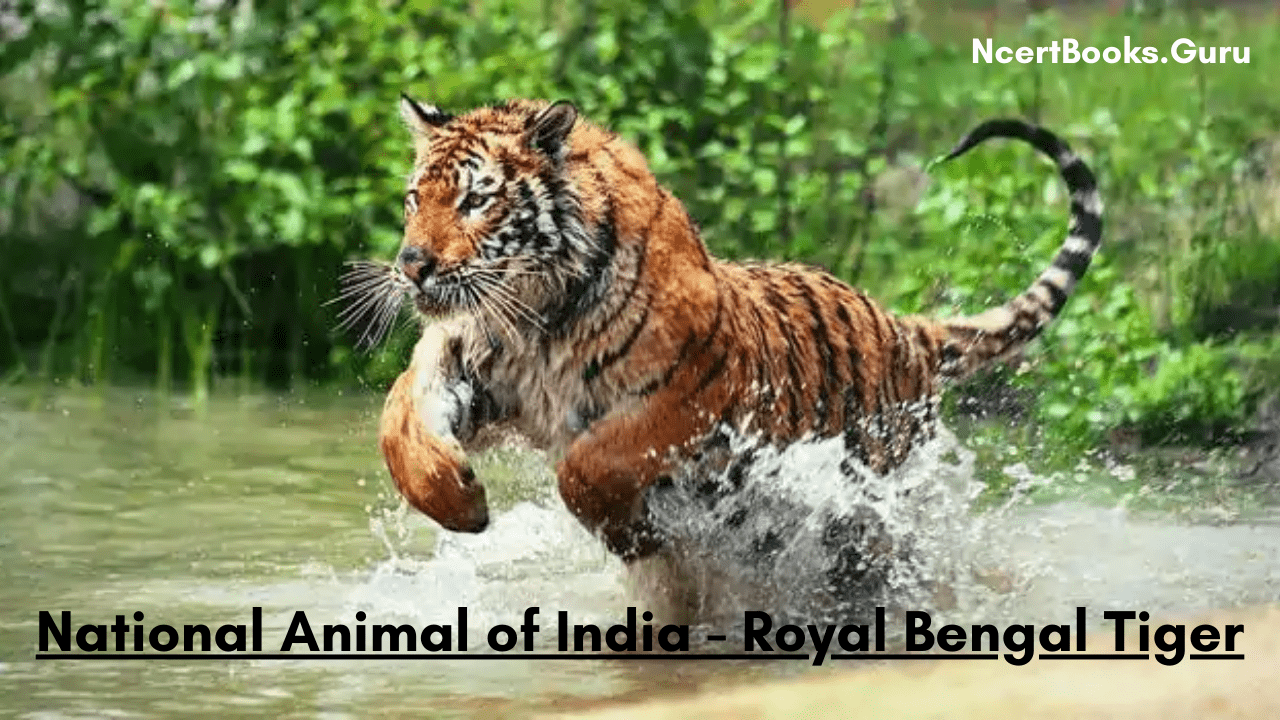 National Animal of India: To represent the country’s image and its ethnic culture, the government of India chooses Indian National Symbols very carefully. In the list of National Symbols of India, the national animal of India is one of the important symbols in terms of general awareness. As students or candidates who appear in competitive exams face these types of GK General Knowledge Questions about India and the World.

India’s National Animal Tiger was a symbol of Power in Hindu mythology and the Vedic era. Also, Tiger is the animal-vehicle for Goddess Durga. Across the world, 80 percent of Tigers located in India. As well, Royal Bengal Tiger has featured in Indian currency notes and postage stamps. For more information, please check out the complete article and get the information on the National Animal of India ie., the Royal Bengal Tiger.

About Royal Bengal Tiger – A National Animal of India

The Magnificent Royal Bengal Tiger is the national animal of India and also called with the scientific name ie., Panthera Tigris Tigris. The Bengal Tiger is a striped animal in the color yellow and black. It has a thick yellow coat of fur with dark stripes. It is a symbol of strength, agility, and grace. Our Country’s National Animal Tiger is majestic, royal, and fatal simultaneously which leads it to the most prominent carnivores among the Indian Fauna. Generally, it is recognized for its magic and charming features that define it besides the remaining wild animals found anywhere in India. All these qualities make it the national animal of India in the year April 1973.

Also, in 1973, Project Tiger was started to preserve the dwindling population of tigers in India while Prime Minister Indira Gandhi’s tenure. The first director of this project Tiger was Kailash Sankhala. Earlier to the tiger, the lion was India’s national animal. Currently, India has 50 tiger reserves which are governed by Project Tiger. All these 50 Tiger reserves names with states are listed below along with more details about India’s National Animal.

Our Indian National Animal is mainly located in the following places. They are,

What is the Life Span of Tiger?

The average lifespan of the national animal of India, the Royal Bengal Tiger is 8 to 10 years in the wild. The maximum lifetime of the wild specimen is approximately 15 years.

Tigers in a few numbers can reach the age of 15 years in the wild as they ultimately become too weak to hunt large animals. In captivity, they can live around 18 to 20 years. That’s all about the lifetime of Bengal tigers. If you are so excited to know the list of tiger reserves in India, then check out the below module without any delay.

In the year 1973, during Project tigers was started there were only nine tiger reserves throughout the country. After protecting the specimen by the national government the number has crossed up to 50 as of the 2019 data report. The names of all the tiger reserves in India are listed below along with state names.

Knowing and memorizing all country’s national animals is very difficult yet important because such questions can be asked in various competitive exams. So, check out the list of National Animals of all Countries via this direct link and find more details about it.

1. Is Lion the national animal of India?

Yes, the Lion was India’s national animal up to 1972. In 1973, Prime minister of India Indira Gandhi replaced by the Tiger. It is the fusion of stamina, strength, agility, and tremendous power. These qualities made the tiger as National Animal of India.

2. Why is the Tiger India’s National Animal?

Because of its elegance, strength, agility, and colossal power, the tiger was represented as the national animal of India.

There are 2967 tigers in India as of 2019. All Thanks to the actions taken by the World Wildlife Fund and the government.

4. What is the lifespan of a Royal Bengal Tiger?

The average lifespan of a tiger is 8 to 10 years in the wild.