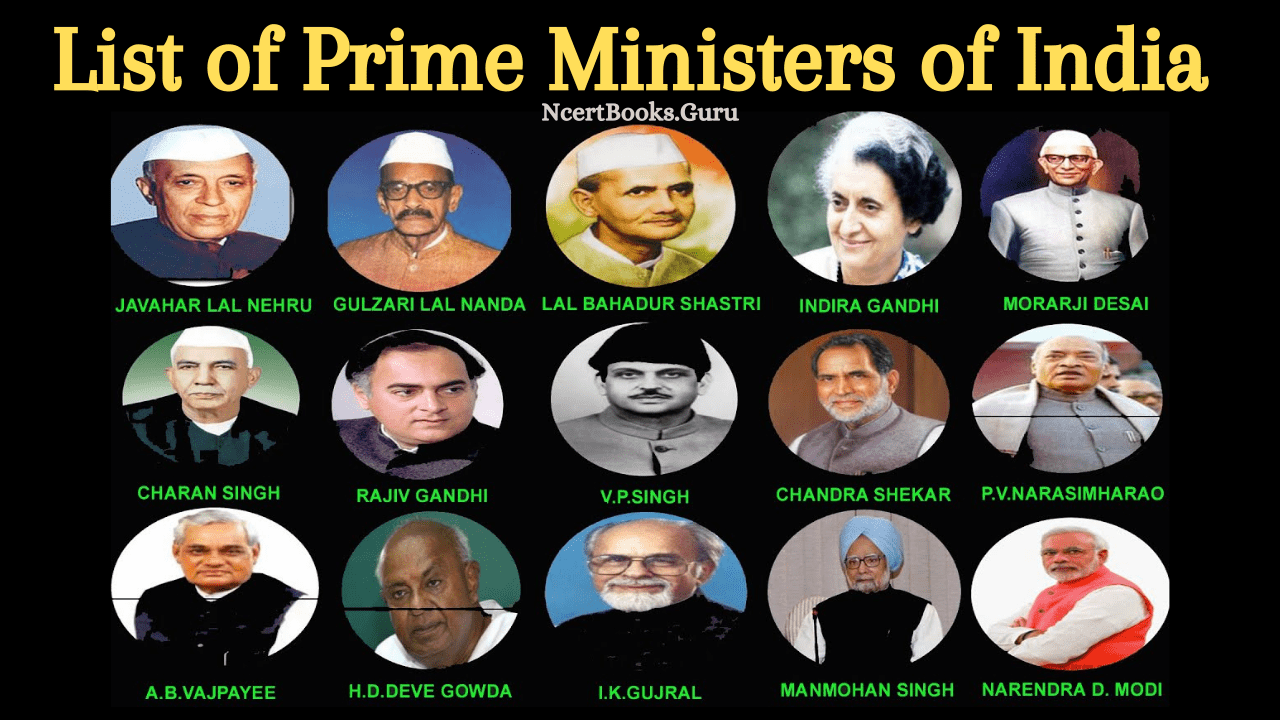 The List of India’s Prime Ministers is the most crucial topic in terms of the general awareness section in UPSC and other government exams. Mainly asked questions in different competitive & govt exams are listed below. So, take a look at the List of Prime Ministers of India Overview:

Appointing a new Prime Minister of India can be done after scheduling the next general elections in 2024. To date, the current PM of India rules the government. Generally, Prime Minister is the leader of the party or the alliance that has a majority in the Lok Sabha. Are you looking for the List of Prime Ministers of India from 1947 to 2021? then here it is. The table provided below assists you to read and memorize the PM of India from earlier to current:

In 75 years of independence, India has got its 18 Prime Ministers. Check the details about their service and how long each of them served as Prime minister of India from the below modules.

Narendra Modi first elected as a PM of India in 2014 to the 16th Lok Sabha and also serving his second period of office. He is also the leader of the Lower House (Lok Sabha) as well as the head of the council of ministers. The 14th India’s PM is Narendra Modi Ji and also check who are the prior Prime ministers of India from below.

The 13th PM of India was Dr. Manmoham Singh and he served two complete tenure as a PM. Also, he has headed as United Progressive Alliance (UPA) governments twice. From 1988 to 2004, he was the leader of the Upper house (Rajya Sabha), and right now he is serving his 6th Rajya Sabha tenure. However, Manmohan Singh is broadly authorized for the 1991 LPG ( Liberalisation, Privatisation, Globalisation ) improvement in India as the finance minister in the PV Narasimha Rao government. He achieved 15th governor of the reserve bank of India and also awarded by Padma Vibhushan in 1987.

One of the longest-serving prime ministers of India is Atal Bihari Vajpayee. He has served three terms as PM and first elected as the 10th Prime Minister of India where he served for a tenure of 13days only. Have you heard about the solgen “Jai jawaan, Jai Kisaan, Jai Vigyan”? This was given by the Atal Bihari Vajpayee. He was the External Affairs Minister in the Morarji Desai government and is memorized for his subsidy in improving the Indo-Pakistan ties. Vajpayee sir was elected as a two-time member of the Rajya Sabha from 1962-67 and 1986-91 as well as 10 times to the lower house. His birthday marks the Good Governance Day in India and the date of his birth is December 25 on Christmas Day. Also, he was the founding member of the Bharatiya Jana Sangh later turned to the Bharatiya Janata Party where he was the first president.

Inder Kumar Gujral (I K Gujral) was a participant in the Quit India Movement under Gandhi Ji’s leadership and he was the 12th prime minister of India from April 1997 to March 1998. He served as a member in both Rajya Sabha and Lok Sabha. As the external affairs minister, I K Gujral is identified for the Gujral Doctrine – a set of five principles to supervise the foreign policy of India with its immediate neighbours, particularly Pakistan.

The full name of the 11th Prime Minister of India is Haradanahalli Doddegowda Deve Gowda. Also, he has held the office of the Karnataka chief minister from 1994 to 1996. He was elected as the PM when any of the parties won a sufficient amount of seats to form the government and the United Front formed the government with Congress support. Also, Deva Gowda was a member of the 14th, 15th, and 16th Lok Sabha later his tenure as the prime minister of India.

The 9th and first prime minister to come from southern India is Pamulaparthi Venkata Narasimha Rao. From 1993-96, he was worked as the defence minister, and from 1992 to 1994, he served as the minister of external affairs. Also, he holds the home minister’s power under Rajiv Gandhi in 1986. The 4th CM of Andhra Pradesh was Narasimha Rao and he brought 1991 economic reforms under his ownership as the Indian Prime Minister.

Chandra Shekhar is the 8th PM of India and leads a minority government of a Janata Dal breakaway party with the help of Congress to postpone the election process. By the most limited number of party MPs, his government observed as the ‘lame duck’. The 1991 economic change and the murder of Rajiv Gandhi were two pivotal events that happened during his period of office from 1990 to 1991.

VP Singh’s full name is Vishwanath Pratap Singh. He was the 7th PM of India and the 12th chief minister of Uttar Pradesh as a congressman. From 1984 to 1987, VP Singh was the finance minister from 1984 to 1987 and defence minister from 1989-90 under PM Rajiv Gandhi when the Bofors scandal surfaced. In the VP Singh period of office, the Mandal Commission Report for reservation in government posts / educational institutions was executed.

Rajiv Gandhi is the son of preceding PM Indira Gandhi and Feroze Gandhi. He served as the 6th prime minister of India from 1984 to 1989. Rajiv Gandhi took charge as PM of India on the assassination of Indira Gandhi in 1984 at age 40 and after the Sikh riots. He was also called the youngest PM of India. Before India’s PM, he also worked as a pilot for Indian Airlines. He was the president of the Congress party from 1985 to 91. His term was marked by prominent cases like that of Shah Bano, the Bhopal gas difficulty, and the Bofors scandal. He was killed by an LTTE suicide bomber in 1991 at age 46 and was awarded the Bharat Ratna after death.

5th PM of India is C Charan Singh. He born in a farmer family in Uttar Pradesh(UP) and was the champion of peasants’ rights.

Morarji Ranchhodji Desai served as a 4th Prime Minister of India and chief minister of the Bombay state, from 1952 to 1956. At it was partitioned into Maharashtra and Gujarat. He headed the government made by the Janata Party.

The full name is Indira Priyadarshini Gandhi. She is the third PM of India and also the first & only woman prime minister so far. Indira Gandhi served the second-longest tenure as a prime minister and also the minister of external affairs (1984), minister of defence (1980 – 82), minister of home affairs (1970 – 73), and minister of information and broadcasting (1964 – 66). She imposed the 1975 state emergency to suspend elections. During her tenure, the 1971 war with Pakistan for the liberation of East Pakistan was held. She was killed in 1986 by her own bodyguard after Operation Blue Star.

The 2nd PM of India was Congressman Lal Bahadur Shastri. He appeared with the slogan of ‘Jai Jawan Jai Kisan’ that grew famous when the 1965 Indo-Pakistan war and worked as the Railways minister under Jawaharlal Nehru. Lal Bahadur Shastri died the day following the Tashkent Agreement that formally finished the war.

The First and the longest-serving Indian Prime Minister is Jawaharlal Nehru. He was a preeminent personality in the Indian independence movement and worked as the prime minister until his death in 1964. Jawaharlal Nehru is also known as ‘Chacha Nehru’ due to his love for children. As per his roots in the Kashmiri Pandit community, he was also called ‘Pandit Nehru’.

The list of PM of India from 1947 to 2019 (present) is given below for quick reference to students at the time of revision. Check the list on the regular basis and memorize the names of prime ministers of India and their period of service.

2. Who is the long-serving PM of India?

Jawaharlal Nehru served as India’s prime minister for a long period of time until his death in May 1964. His period of office as Prime Minister was from 15th August 1947 to 27th May 1964.

3. Who was the first female Prime Minister of India?

Indira Gandhi was the first and the only women Prime Minister of India to date.

Narendra Damodardas Modi is the current Prime Minister of India.

5. Which Article addresses the PM Appointment in India?

Article 75 of the Indian constitution addresses the appointment of Prime Ministers and other ministers of India.