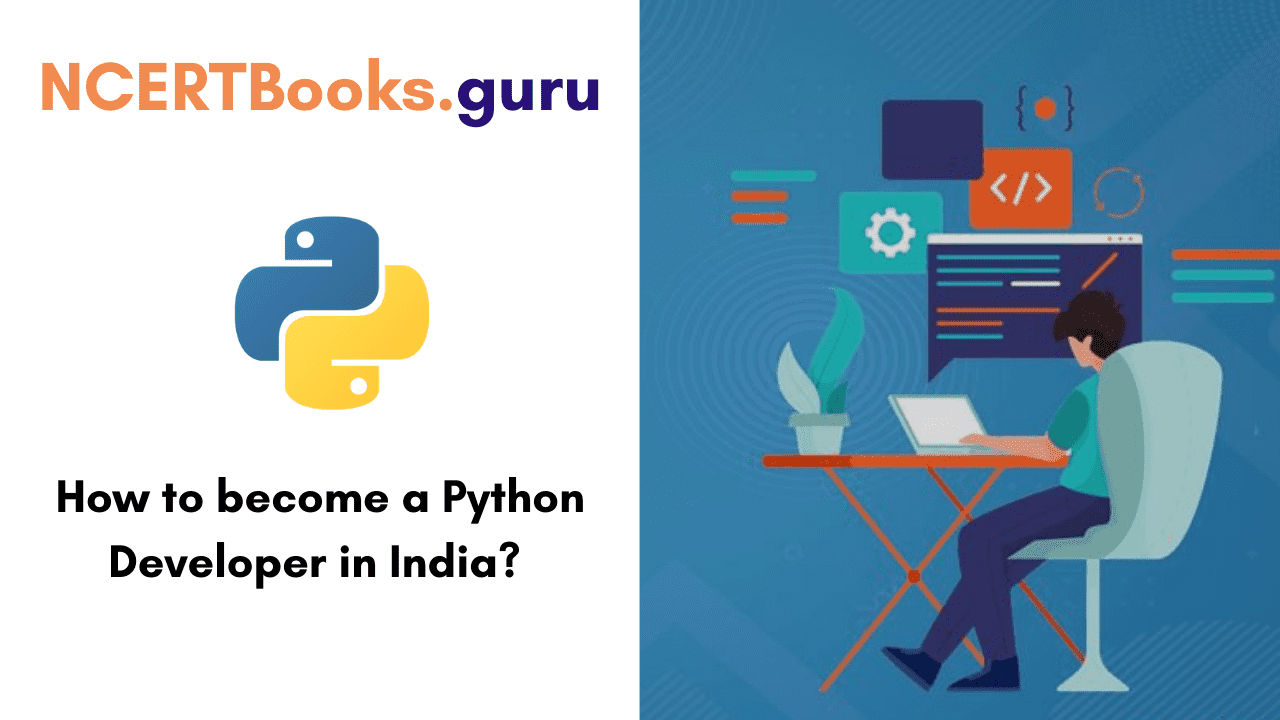 With the growing popularity of the Python programming language and the increasing demand for Python developers in the market, many people wanted to know, ‘How To Become A Python Developer in India?’ And this article says it all about how to become a python developer, benefits, entry-level salary, and much more.

Python is a simple language that is easy to learn. It is widely used for web or software development task automation, data analysis, data visualization, and so on. Since the syntax of the Python can be readable and it reduces the cost of program maintenance. Python language also supports modules and packages, which encourages program modularity and code reuse.

Who is a Python Developer in India?

However, with the advent of machine learning and data science, python developers no longer limit their work to developing code and debugging errors, but also work with applications connecting to third-party web services and assisting the front-end development team in bringing their user interface features to life.

Why become a Python Developer in India?

The reason why people choose to be python developer is,

Since the Python programming language is simple, developers don’t have to put much effort into creating complex programs. They would only concentrate on the implementation, which Python excels at. Also, the Python program is free and open-source to users. It can be run on various platforms like Windows, Mac, Linux, Ubuntu, etc.

How to Become a Python Developer in India?

To become a python developer, you need to have knowledge of the below python skills. To know more about the eligibility, admission process of the course you can check out our article on Python Course Details.

Variables and Data Types
A Variable in python is created as soon as a value is assigned to it.
Data Types is the type of value the variable is holding.
Example: x = 10
In the above example,
‘x’ is the variable, whereas ‘10’ is the value that is said to be an integer data type.

Data Structures and Algorithms
Lists, sets, tuples, and dictionaries are some of the most basic Python data structures. Each data structure is distinct in its own right. Data structures serve as “containers” for organizing and grouping data by type.

Algorithms in Python are a set of instructions that are executed to find a solution to a given problem. They are not language-specific and can be implemented in several programming languages. Algorithms are not written according to any set of rules.

Loops, Conditional, And Control Statements
A loop statement is a set of steps or a sequence of statements that is repeated zero or more times until the given condition is met.
A conditional control structure is used to execute statement(s) based on some condition.

Modules and File Handling
The io module in Python offers many functions for dealing with files. This function returns a filehandle object, which is saved in the file object variable.

Not only the above skills but also having knowledge in Web Frameworks will lead you to become a web developer. Below are some of the web frameworks,

Get a Complete List of Course Details regarding Various Streams and know the Career Options that you can Pursue as per your interest.

Skillset required to become a Python Developer in India

Python is a simple programming language to start with. A Python developer works on many tasks like below,

Below are some of the job roles and their expected skills,
Software Developer/Engineer
A software developer/engineer should be familiar with core Python, web frameworks, and object-relational mappers. They should be familiar with the multi-process architecture and RESTful APIs in order to integrate applications with other components.
Python Web Developer
Writing server-side web logic necessitates the use of a Python web developer. They should be knowledgeable with web frameworks, as well as HTML and CSS, as they are the building blocks of web development.
Data Analyst
Data interpretation and analysis require the services of a data analyst. They should have a strong understanding of mathematics and statistics.
Data Scientist
A data scientist must have the knowledge of data analysis, interpretation, manipulation, mathematics, and statistics in order to help in the decision-making process. They must also be experts in machine learning and AI, including all machine learning techniques such as regression analysis and naive Bayes, among others.
Machine Learning Engineer
On top of mathematics and statistics, machine learning engineers must understand deep learning concepts, neural network architecture, and machine learning algorithms. A machine learning engineer must be well-versed in algorithms such as gradient descent, regression analysis, and the development of prediction models.
Automation Testing Engineer
As an automation engineer, you will be responsible for identifying software processes that can be automated. They must design and execute automation scripts to test the functionality of processes. They must also develop testing strategies and frameworks for automation. 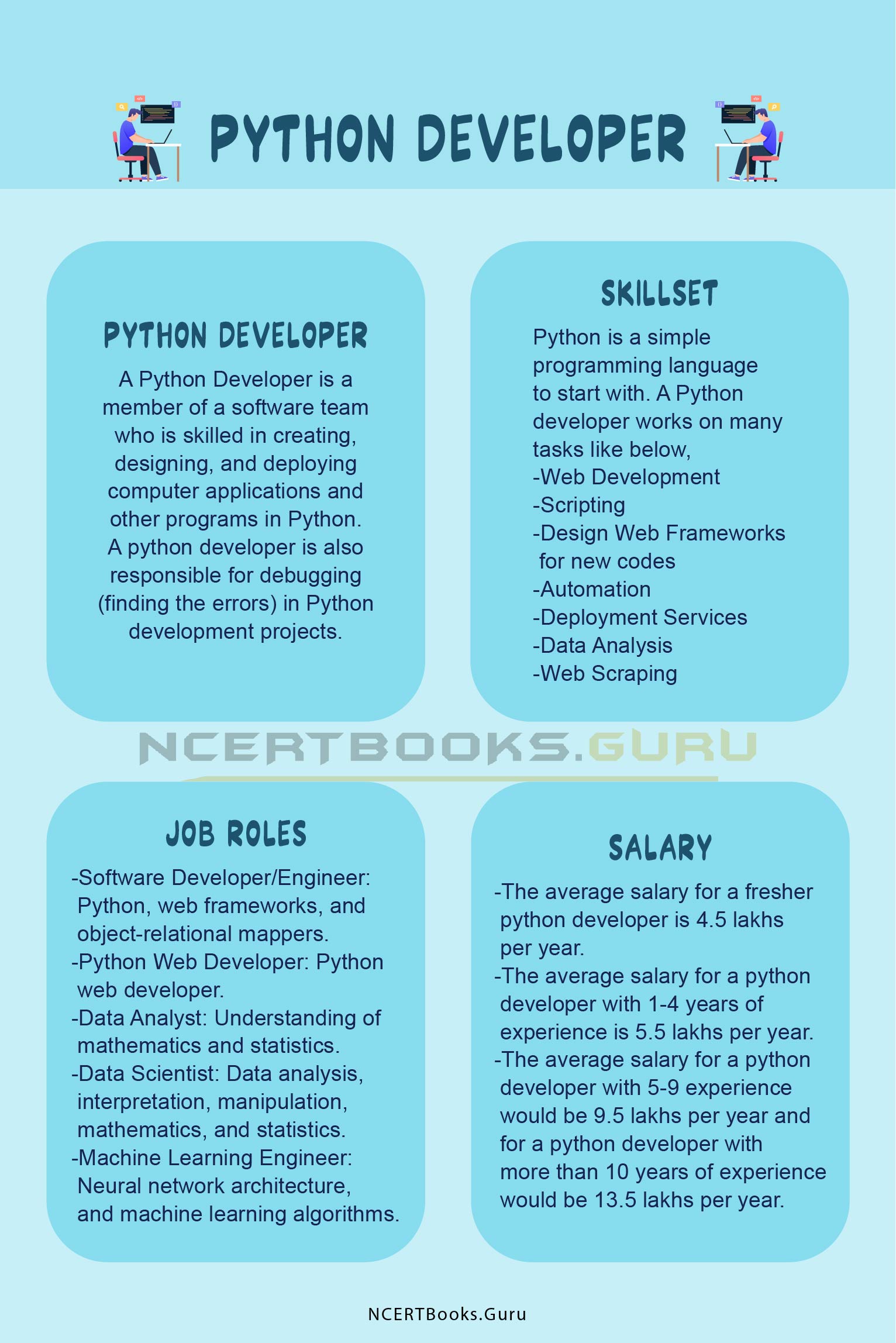 Salary of Python Developer in India

The salary might also vary based on the location and company also.

FAQs on  Python Developer in India

1. What qualifications do you need to be a Python developer?

In order to become a Python Developer, one needs to have the following qualifications

2. What is the salary of a Python developer in India?

The average salary of a Python Developer in India is around 4 Lakhs. This can vary based on the company’s reputation, level of job, experience, etc.

3. Is the Python developer job hard?

Python is considered the easiest programming language to learn. If you work hard enough becoming a python developer is easy.