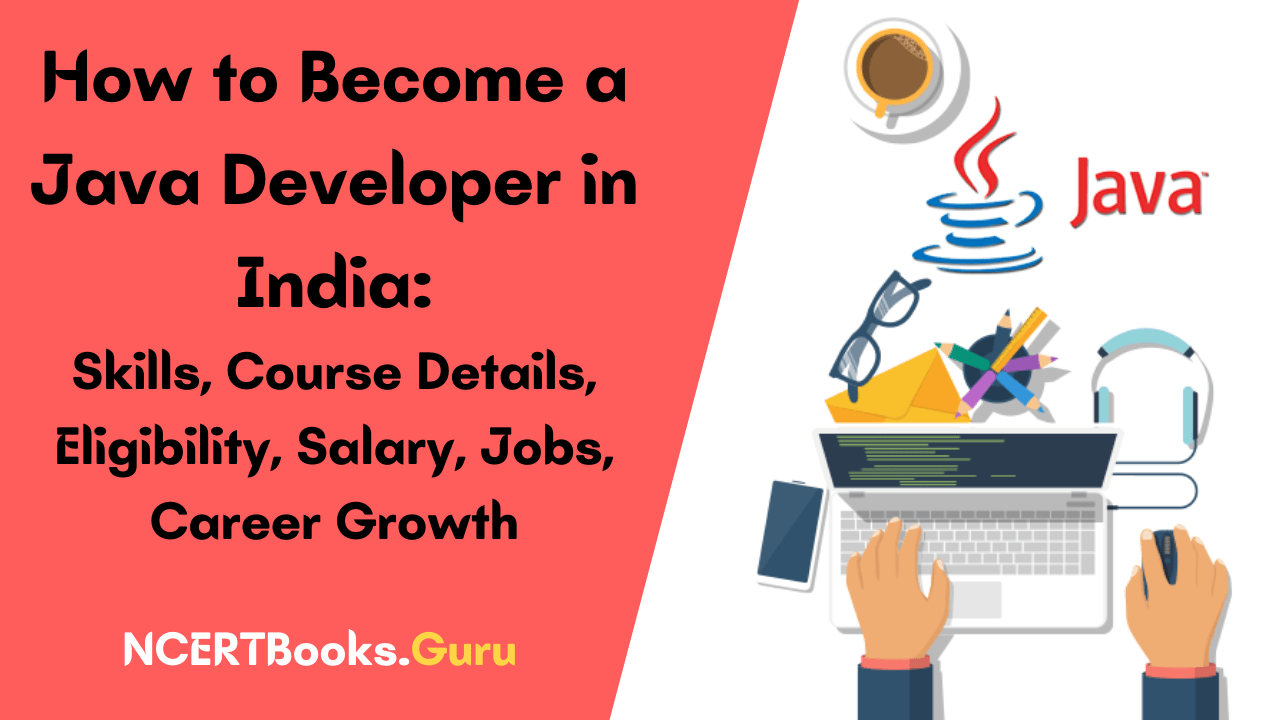 Career as a Java Developer in India: Java is an object-oriented third-generation programming language that is used in the development of applications for various platforms. It is effective for mobile applications, desktop applications, computers, navigation systems, and monitoring devices, among others.

To understand the complexities of Java as a programming language, you must first understand the terminology for these three features: object-oriented, concurrent, and independent. Here are the complete details on How to become a java developer in India.

Who is a Java Developer?

A Java Developer is a member of the software development team who creates, designs and manages applications in Java, a versatile, cross-platform programming language.

He or she not only executes Java code but is also involved in the entire application development process. A java developer will ensure the effective and efficient development of an application and its deployment on a server, from programming to error resolution.

Java as a programming language is used by many large companies and developers for programming and building applications; thus, Java Developers benefit from its widespread use and highly skilled adaptability. As a result, this is one of the reasons why java developer salaries in India are among the highest-paying jobs.

Skills Required to Become a Java Developer in India

When hiring a Java Developer, every employer looks for a specific set of skill sets. You should also keep in mind that the skillset is a deciding factor in determining the average salary of a java developer in India.

As a result, some of the skills required to stand out as a Java Developer are listed below.

Areas of expertise in Hard Skills:

Many different certifications are accumulated depending on the type of Java Developer one wishes to become. He or she may pursue careers as a Front End Developer, Back End Developer, Full Stack Developer, or Web Developer.

Below is a detailed explanation about the various types of Java Developer jobs,

Front End Developers are in charge of creating visually appealing User Interfaces. It is necessary to understand human-machine interaction and design principles. Front End Developers deal with cross-browser compatibility issues and the visual presentation of a user interface. Their primary responsibility is to ensure that visitors to the website can easily interact with the page. They accomplish this by combining design, technology, and programming to code the appearance of a website, as well as taking care of debugging.

Full Stack Developers create engaging User Interfaces by combining the work of Front End and Back End Developers. They use a variety of tools to create those user interfaces, including the Java Virtual Machine, Enterprise Java Beans, SQL databases, Python, C++, Ruby, and others. They are experts who are conversant with both client-side and server-side programming.

A web developer is someone who creates innovative and engaging websites to keep their customers interested. In their daily work, website developers employ JavaScript, CSS, and HTML. They design and build websites and are in charge of the site’s appearance. They also look for technical aspects of the site, such as its performance and capacity, which are measures of a website’s speed and capacity to handle the traffic.

Want to understand several Course Details belonging to different categories all under one roof? then be with us and make a wise decision regarding the course you opt for.

Steps on How to Become A Java Developer

Before deciding to become a Java Developer, one should consider his or her interests to be successful in this field. If one is determined to become a Java Developer, then research the profession. Students should be aware of the benefits and drawbacks of the profession from an early age, as this will help them in the future. They must choose a stream as well as subjects that will help them understand the topics taught at the undergraduate and postgraduate levels.

Students who want to become Java Developers should be aware of the entrance exams for the course as well as some of the best colleges for Computer Science.

Students should select subjects that include Physics, Chemistry, and Math because these subjects serve as a foundation stone for those who wish to pursue a career in Java Development.

After completing 10+2, to become a Java Developer one must choose B.E./B.Tech./BCA/B.Sc. in Computer Science or Information Technology or Software Engineering.

After completing your graduation, if you wish to pursue your postgraduate then,  one must choose M.E./M.Tech./MCA/M.Sc. in Computer Science or Information Technology or Software Engineering.

Step-3: How to Get Admission to a Good College

A good college has a good placement record, an alumni network, good regular faculty as well as visiting faculty, infrastructure, campus facilities, and so on. To begin, understanding why you want to take this course is a critical first step. They can also compare a few colleges that offer the desired course, giving them options for selecting the best college for themselves.

Qualified candidates are invited to Group Discussions and Personal Interviews after passing specific entrance exams. The weightage of group discussions and personal interviews is set by the college and varies from college to college.

Some colleges also provide direct admissions to candidates based on their performance in the entrance exam or the most recent qualifying exam. Admissions are offered in rounds, with the number of rounds varying according to the college. Candidates are called for document verification after the Group Discussion/Personal Interview/Merit Rounds, after which they are assigned a seat in the college.

The following is the list of a few colleges that provide courses to become a java developer in India. They are as follow:

Roles and Responsibilities of Java Developer

A Java Developer’s primary roles and responsibilities are as follows:

Advantages of a Career as a Java Developer

The list of 5 handy tips to be a java developer followed here will help you grow high while learnings:

A Java Developer salary per month can be competitive in the early stages because the salary is primarily determined by the candidate’s performance.

The below table represents the java developer average salary in India according to the specialized field:

The average Java Developer Salary in India for freshers starts from INR 3,50,000.

The average salary for an experienced Java developer starts from INR 6,00,000.

Your pay structure is heavily influenced by where you are hired. Some of the top companies in India that hire Java developers are below, 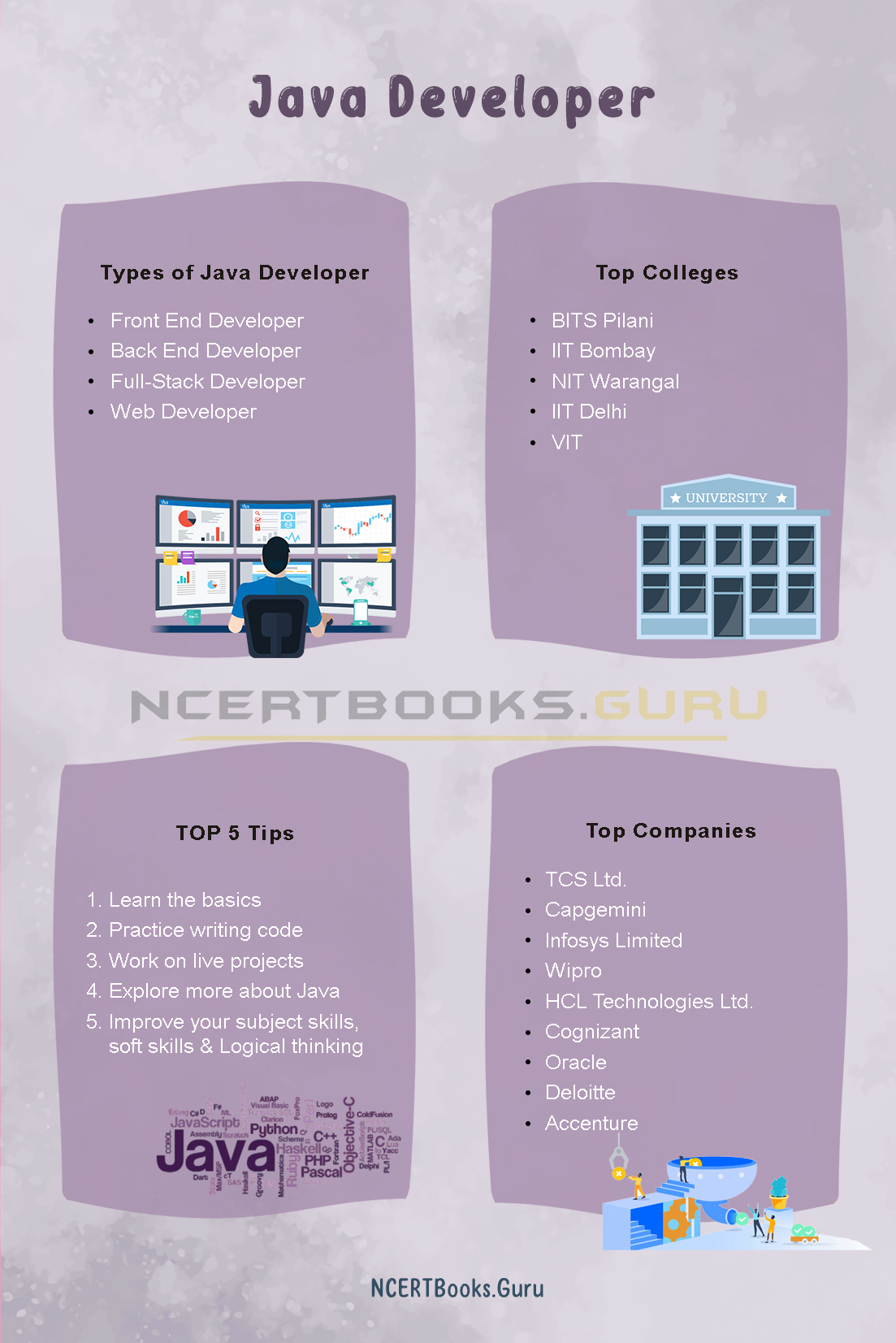 FAQs on How to become a Java Developer in India?

1. How much does a Java developer earn in India?

The average salary of a java developer in India is ₹458,970/year. The pay scale is ranged from a minimum of ₹200k per annum to the maximum of ₹1million per annum. It is in demand by many great companies and employers.

2. What qualifications does a Java developer need?

Becoming a Java developer often requires a bachelor’s degree in computer science or a related field, but the experience is just as important. Some of the best devs out there are self-taught, and they generally learn as and when new features or developments get released.

3. Which is better Java or Python?

4. How long will it take to learn Java?

A minimum of 1-2 years is for sure required to learn Java. The years will increase based on the side skills you want to learn and the more in-depth knowledge you want to gain regarding Java.

5. Does Java have a future?

Yes, Java has a very bright future ahead. It might be 20 years old but with its latest updations, it is still positioned as the Number 1 programming language for developers. Therefore, Java has good market future demand in the coming years.