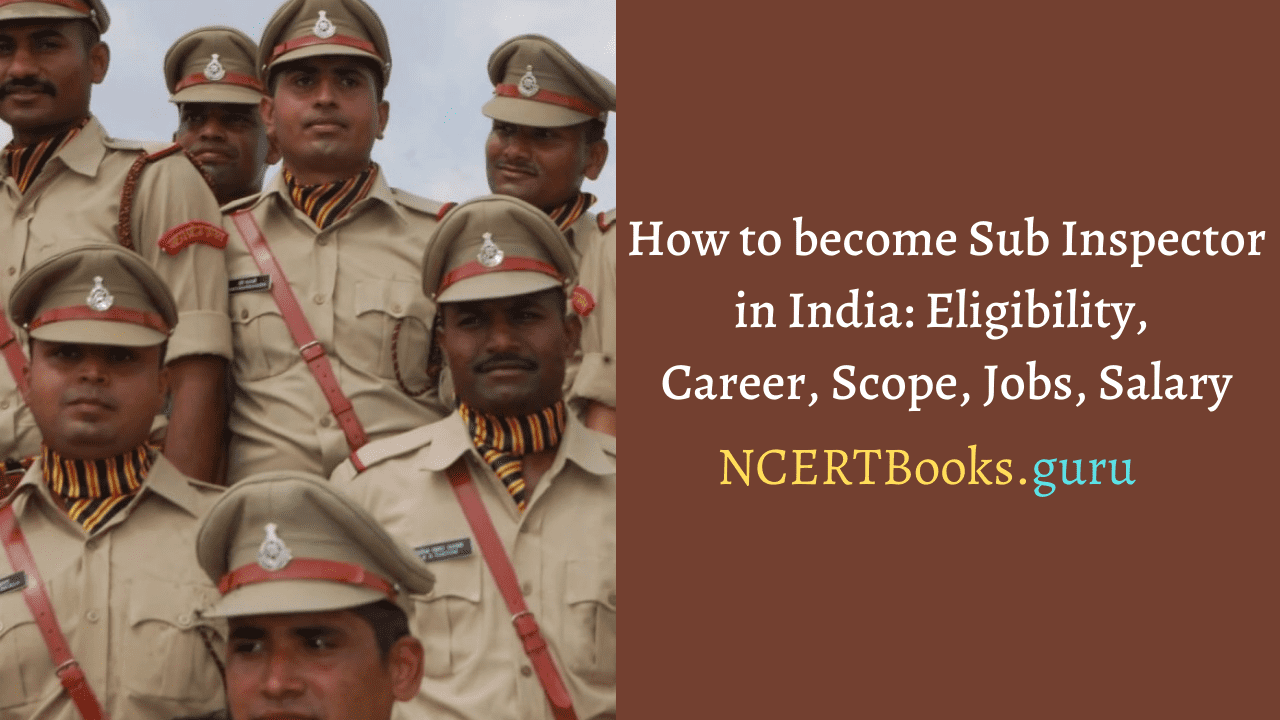 Working as a Sub Inspector of Police is a dream come true job for those aspiring to become a police officer in India. Every year many state and central government recruitment bodies will announce the vacancies to fill the post of Sub Inspector Police in India. Any candidate who wants to become a SI in India will have to fill out an application form from these recruitment bodies.

On this page, we will provide you with all the necessary information on how to become a sub-inspector of Police in India, their salary, promotions, educational qualifications requirements, and much more. Scroll down to find more.

About Sub Inspector in India

A sub-inspector of police is a police officer whose rank is below an inspector or some head constables. Under Indian police rules and regulations, a sub-inspector is the lowest-ranked official who may submit a charge sheet in court. Subordinates can only conduct investigations on the behalf of sub-inspector but cannot file a charge sheet.

Sub Inspector ranking in India is one level above the assistant sub-inspector and one level below that of an inspector. For the position of sub-inspector of police, most candidates with higher educational qualifications than other low-ranking police officials are chosen directly. In this scenario, the principal sub-inspector is the directly designated sub-inspector in charge.

How to become Sub Inspector of Police in India?

To become an SI in India, one will have to meet certain educational qualifications and other eligibility criteria released by the recruitment bodies. Let us discuss them now in detail.

The eligibility criteria which are common under all the recruitment bodies in India are listed below:

⦁ Citizenship: To work as a Sub Inspector in the Indian Police Department, you must be a citizen of India.Bachelor’s
⦁ Educational Qualification: To become a sub-inspector of police, one must be a bachelor’s in any field with a minimum of 50% marks from a recognized university or institute.
⦁ Age Liapplicant’se final date of official notification, the applicant’s age must be between 20 and 25 years old.
⦁ Physical Measurements: To be considered for a Sub Inspector position in the Police Department, candidates must be 170 cm tall and have a chest measurement of 80-85 cm.

Note: The above eligibility criteria will vary depending on the recruitment board you are applying for. Also, depending on the state, there will be age relaxation provided to candidates based on their category.

How to become a Sub Inspector of Police in India?

The steps to becoming a SI in India are as follows:

The first step towards becoming a SI in India is to clear Class 10 and Class 12 or equivalent exams. To become a SI, there are no subject-specific or stream-specific requirements. Candidates are required just to pass their high school exams with good scores.

For example, if you want to work as an SI under Tamil Nadu State Government, you will have to follow the TNSURB website to appear in the SI recruitment exam and when it is released. Similarly, one can also follow the SSC website and appear in the SSC CPO exam to become an SI officer.

Once the state or central government recruitment body announces the vacancy, you will have to check your eligibility criteria, fill out the application form, appear and crack the exams. Based on your Sub Inspector recruitment exam score, you will be posted as an SI in India.

See different course details all under one roof and decide on whether to choose a particular course or not at your convenience.

Career Opportunities for Sub Inspector of Police in India

For individuals who are loyal and brave individuals, a career as a sub inspector has a lot of promise. Due to a growth in the number of crime scenes and the resultant uneasiness among the general public, the need for police officers in India is rising faster. There are several possibilities available for those who want to serve India.

After becoming a police sub inspector, you will have many more possibilities for advancing your career, such as

A candidate who applies for the position of Sub-inspector is a non-gazetted police officer is paid on the salary scale of Rs.9300-34800 plus grade pay of Rs.4600/- and additional allowances as per government guidelines.

Salaries offered by different recruitment bodies for the position of Sub Inspector of Police are tabulated below:

1. How can I become an inspector in India?

Earn a bachelor’s degree and clear the competitive recruitment exams. Then undergo the training to become an inspector in India.

2. How to become Sub Inspector after 12th?

Right after Class 12, you cannot become a SI officer. But still, you can join as a low-level police officer in the state or central government and perform your duties well. After successful promotions, you can become a SI.

3. How to become Sub Inspector in Karnataka?

In order to become a sub-inspector of police in Karnataka you will have to clear the KARNATAKA STATE POLICE RECRUITMENT examination.

4. How to become Sub Inspector in Tamil Nadu?

To become SI in Tamil Nadu, you will have to appear and clear the Tamil Nadu Uniformed Services Recruitment Board examination conducted for recruitment of Sub Inspectors in TN.

5. What is the job role of a sub inspector in India?

The Sub-Inspector of Police is the lowest-ranking officer who may submit a charge sheet in court under Indian Police rules and regulations, and is generally the initial investigating official.