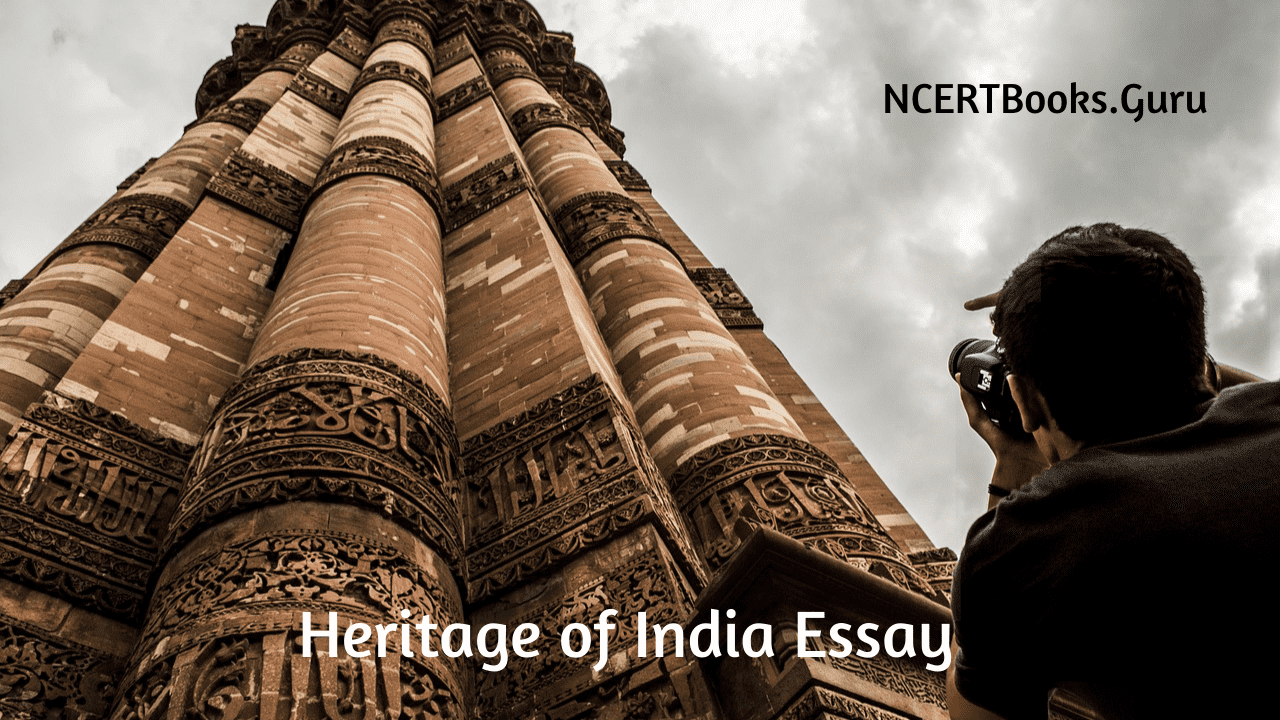 Heritage of India Essay: India has a rich and unique cultural heritage, and has managed to preserve its established traditions throughout history. By absorbing customs, traditions and ideas from both invaders and immigrants, Indian culture, evolved with confluence of several regional cultures, which witnessed cultural influences from other countries and consequently, also influenced the culture of several other regions.

Long Essay on Heritage of India 500 Words in English

Below we have given a long essay on Heritage of India of 500 words is helpful for classes 7, 8, 9 and 10 and Competitive Exam Aspirants. This long essay on the topic is suitable for students of class 7 to class 10, and also for competitive exam aspirants.

Indian culture is strongly influenced by various religions and their respective folk lores and art. While the classical influence is still evident in rural Indian culture, the urban India is now widely influenced by global popular culture. Indian is usually divided into five major cultural divisions, each with their own styles. Some considers that there is a more pronounced difference between the cultures of South India and North-East India, whereas East and West Indian cultures portray a mingling of Northern and Southern influences with their own peculiar forms. Along with regional diversity, languages have created diverse traditions of culture in India. There are a large number of languages in India—216 of them are spoken by more than 10000 communities.

The two major families of languages are Dravidian languages and the Indo-Aryan languages, the former largely confined to the South India and the latter to the North India. The Constitution of India has stipulated the usage of Hindi and English to be the two official languages of communication for the National Government. Sanskrit served as the classical language of India and Eastern Asia, and is equated in importance to Latin or Greek in Europe. It is studied as far as Japan, due to cultural and religious ties. Each of the languages of India has numerous speakers and thus, their cultural traditions are strong.

The-earliest literary traditions of India were mostly oral and were later transcribed. Most of these spring from Hindu traditions and are represented by sacred works like the Vedas, the epics of the Mahabharata and the Ramayana. Tamil Sangam literature represents some of India’s oldest secular traditions. Many Buddhist and Jain works are in Prakrit languages like Pali.

The classical playwright ‘Kalidasa’ is widely regarded as the greatest poet and dramatist in the Sanskrit language. The place bestowed to Shakespeare in English literature is similar to that held by Kalidasa in Sanskrit literature. On the arrival of Muslim dynasties, Islamic culture dominated most of the medieval Indian literature, with the spread of Persian influence and the rise of famous poets such as Amir Khusro. Simultaneously, India also saw the growth of literature in regional languages.

Colonial rule prepared the stage for modern literature exemplified by the works of Rabindranath Tagore, Bankim Chandra Chattopadhyay, Madhusudan Dutt, Munshi Premchand, Devaki Nandan Khatri and Vaikom Muhammad Basheer among many others. Indian writers in modern times, like RK Narayan, Arundhati Roy, Vikram Seth, Khushwant Singh, Salman Rushdie, Anita Desai and others are the cynosure of wide acclaim today, both in Indian languages and in English.

India has strong traditions of poetry, as well as prose writing. This is often closely related to musical traditions and most poetry can be attributed to religious movements. Writers and philosophers were often also skilled poets. Poetry also served as an important non-violent tool of nationalism during the Indian Freedom Movement. Figures such as Rabindranath Tagore in modern times and poets such as Kabir in medieval times rekindled spark in people’s hearts through their intense verses. Two references of poetry from Tagore’s Gitanjali serve as National Anthems of both India and Bangladesh.

The music of India includes multiple varieties of folk, popular pop and classical music. India’s classical music tradition, including Carnatic and Hindustani music, noted for the use of several Ragas, has a history spanning millennia and, has developed over several eras. Even today, music remains instrumental to the religious inspiration, cultural expression and pure entertainment.

Alongside distinctly sub-continental forms, there are major influences from Persian, Arab and British music. Indian genres like filmi songs and bhangra have become popular throughout the United Kingdom, South and East Asia, and around the world.

India is a land of numerous classical dance forms, each of which can be traced to different parts of the country. Each form represents the culture and ethos of a particular region or a group of people. The eight main styles are Bharatanatyam, Kathak, Odissi, Kuchipudi, Mohiniattam, Bhangra, Manipuri and Kathakali. Besides these, there are several forms of Indian folk dances and special dances observed in regional festivals.

Cave paintings from Ajanta, Bagh, Ellora and Sittanavasal and temple paintings are testimony to the love of nature and God. Most rock arts in India are Hindu or Buddhist in origin. A freshly made coloured design (Rangoli) on floor is still a common sight outside the doorstep of many Indian homes (mostly South Indian). Madhubani painting, Rajput painting, Tanjore painting, Mughal painting are some notable genres of Indian art; while Raja Ravi Varma, Nandalal Bose, Jamini Roy are some modern painters.

The first few sculptures of India date back to the Indus Valley civilisation, where stone and bronze carvings have been discovered. This is one of the earliest instances of sculpture in the world. Later, as Hinduism, Buddhism and Jainism developed further, India produced some of the most intricate bronzes as well as unrivalled temple carvings in the world.

Some huge shrines, such as the one at Ellora were not actually constructed using blocks, but were instead carved out of solid rock, which make them perhaps the largest and most intricate sculptures in the world. The pink sandstone sculptures of Mathura evolved during the Gupta Period (4th to 6th century) exhibit a very high finesse of,execution and delicacy in the modelling. Newer sculptures in the North-West, in stucco, schist or clay, display very strong blending of Indian post-Gupta mannerism and classical influence, Hellenistic or possibly even Greco-Roman. Meanwhile, elsewhere in India, less anatomically accurate styles of human representation evolved, leading to the classical art that the world is now familiar with and contributing to Buddhist and Hindu sculptures throughout Asia.

Indian architecture is such a vast tapestry of the Indian sub-continent that encompasses a multitude of expressions over space and time, transformed by the forces of history, sometimes destroying, but most of the time absorbing new ideas. The result is an evolving range of architectural production that none the less retains a certain amount of continuity throughout history. The earliest production in the Indus Valley civilisation was characterised by well-planned cities and houses. Short Essay on Heritage of India 200 Words in English

Below we have given a short essay on Heritage of India is for Classes 1, 2, 3, 4, 5 and 6. This short essay on the topic is suitable for students of class 6 and below.

During the Gupta and Mauryan empires, several Buddhist architectural forms like caves of Ajanta and Ellora and the monumental Sanchi Stupa were built. South India has several Hindu temples like Brihadeeswara Temple, Thanjavur, the Sun Temple of Konark and Sri Ranganathaswamy Temple at Srirangam. Angkor Wat and other Buddhist and Hindu temples carry the evidence of Indian influence on South-East Asian architecture, as they are built in styles almost identical to traditional Indian temple building. With the advent of Islamic influence, the erstwhile Indian architecture adapted to the traditions of the new religion.

Fatehpur Sikri, Taj Mahal, Gol Gumbaz, Qutub Minar and Red Fort of Delhi are the creations of this era, and are often used as the archetypal symbols of India, despite the greater antiquity and originality of the traditional architecture.

The Colonial rule of the British Indian empire saw the development of Indo-Saracenic style and mixing of several other styles, such as European Gothic, Victoria Memorial and Victoria Terminus. Recent creations such as the Lotus Temple and the various modern urban architectural forms of India, are also notable. The traditional system of Vaastu Shastra serves as India’s version of Feng Shui and influences town planning, architecture, and ergonomics.

It is unclear which system is older, but they contain many similarities. Any glimpse of the rich heritage of India seems to be incomplete because it becomes difficult to capture heritage as old as 6000 years or more in a few words. Yet no one can deny the great contribution of the sub-continent to the richness of India’s heritage, characterised by its delicacy and diversity.