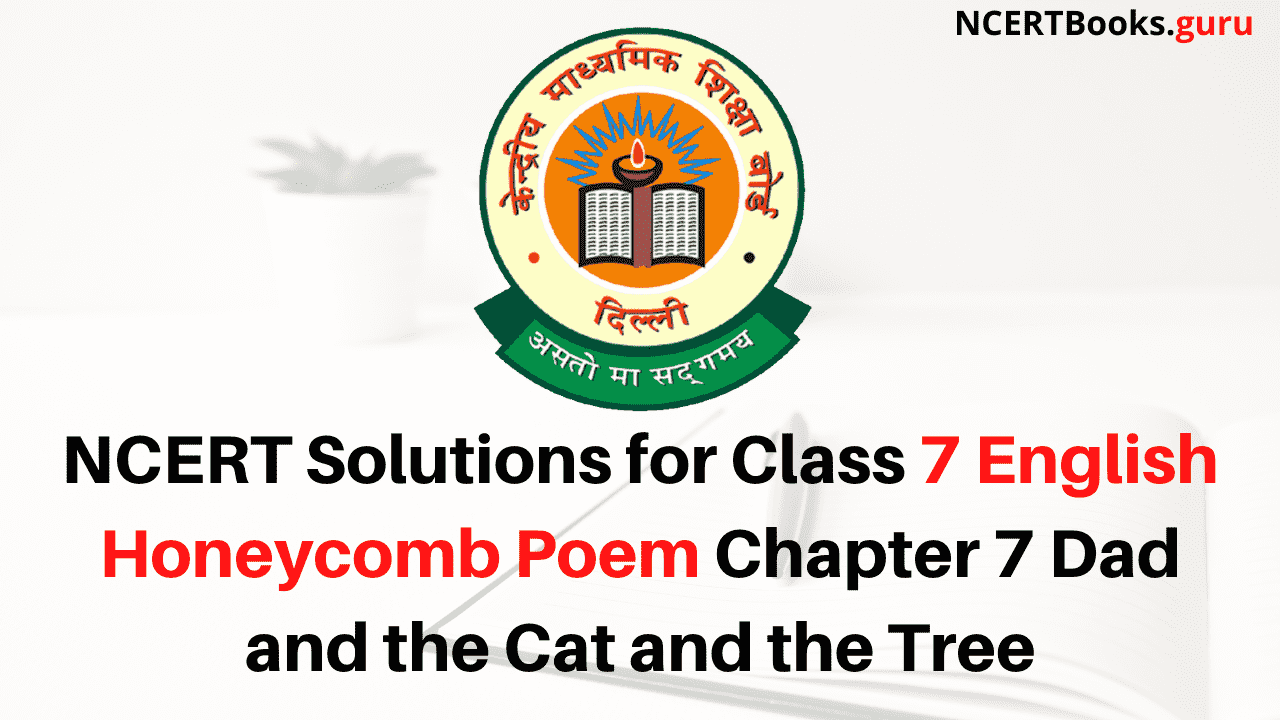 Read the following extracts and answer the questions that follow by choosing the correct option :
Question 1.
This morning a cat got
Stuck in our tree. Dad said, “Right, just Leave it to me.”
(Page 107)

Paraphrase : One fine morning, a cat got stuck up in a tree that belonged to the poet. The members of the family showed their concern but Dad pacified and assured them that he would easily bring the cat down.

Question 3.
Give the synonym for stuck
(a) freed
(b) trapped
(c) slept
(d) struck
Answer.
(b) trapped

Paraphrase : The tree was not easy to be climbed due to its unsteady nature and height. Mum had her fears that Dad would have a bad fall if ever he makes an attempt to climb up the tree.

Paraphrase : Dad laughed at Mum for the weird idea of his fall. He boasted of his climbing skill and confidently mocked that the activity was a child’s play. In no time, he brought a ladder to climb up the tree; but it slipped and Dad fell down in the flower-bed.

Question 2.
The father brought the ladder from
(a) the garden
(b) the shed
(c) the kitchen
(d) the room
Answer.
(b) the shed

Question 3.
The climbing attempt was
(a) a failure
(b) successful
(c) dangerous
(d) cancelled
Answer.
(a) a failure

Question 4.
“Never mind,” said Dad,
Brushing the dirt
Off his hair and his face
And his trousers and his shirt,
(Page 108)
Word-Notes : Never mind-It doesn’t matter, कोई बात नहीं। Brushing the dirt-shaking of the dust, धूल झाड़ते हुए। Off-from, से।

Paraphrase : Dad was quite embarrassed at his fall. He got up instantly and brushed off the dirt from his face, hair and clothes. He assured his family that everything was fine ; despite, the insulting incident.

Paraphrase : Dad was firm on his stand to climb the tree and was ready to implement Plan B. He asked the members of his family to stand out of the way. But Mum had her fears that Dad would fall again. She cautioned him and told him to be more careful.

Paraphrase : Father remarked that Mother was unnecessarily getting scared and to think he would fall was a mere joke. He then swung up on the branch. He wanted to reach the spot where the cat was seated. But unfortunately, the branch broke.

Paraphrase : Dad fell heavily on the floor from where he had climbed up. Mother now could not control herself and told him not to try again. She warned him that if he tried again ; he would definitely be fatally hurt.

Paraphrase : Dad did not pay any heed to Mum’s seriousness of his getting a fatal injury. To drop the idea of climbing the tree was utter nonsense for Dad. He was bent on trying Plan C. Father considered himself an expert climber and was ready for the next attempt to climb the tree.

Question 9.
Then he climbed up high
On the garden wall.
Guess what? He didn’t fall !
(Page 109)
Word-Notes : Guess what ?-imagine what could have happened, कल्पना करो कि क्या हुआ ?

Paraphrase : Dad climbed on the garden wall to take a big leap on the tree to reach the cat. Mum was afraid that he would fall. But one could not imagine that he did not fall this time.

Multiple Choice Questions
Question 1.
Dad again climbed to reach ……
(a) the branch
(b) the cat
(c) the tree
(d) the leaves
Answer.
(b) the cat

Paraphrase : Dad took a big leap and was successful. He landed exactly in the crook of the tree where the cat was seated.

Paraphrase : The cat had to face a terrible moment. She yelled as it was frightened to see Dad landing on her. In turn, the cat landed on the ground. It felt so pleased that it had come down, safe and sound.

Paraphrase : The cat was nonetheless quite satisfied at her landing. But it smiled mockingly at Dad’s fate who had now been trapped in its place.

Question 3.
Describe Plan A and its consequences.   (Imp.)
Answer.
The plan A was to climb on the tree with the help of a ladder. Dad tried to do so. But the ladder slipped and Dad fell in the flower-bed.

Question 7.
Why and when did Dad say each of the following ?
(i) Fall ?
(ii) Never mind
(iii) Funny joke
(iv) Rubbish
Answer.
(i) Dad said, ‘Fall ?’ when Mum said, ‘For goodness sake, don’t fall !”.
(ii) Dad said, ‘Never Mind’ when the ladder had slipped and Dad had fallen in the flower-bed.
(iii) Dad said, “Funny joke” when Mum warned him not to fall again.
(iv) Dad said “Rubbish” when Mum asked him to stop trying to rescue the cat. She warned that it might break his neck.

Question 8.
Do you find the poem humorous ? Read aloud lines which make you laugh.
Answer.
Yes the poem is humorous. The following lines make us laugh. “So it’s smiling and smirking Smug as can be
But poor old Dad’s
Still
Up
The
Tree !”