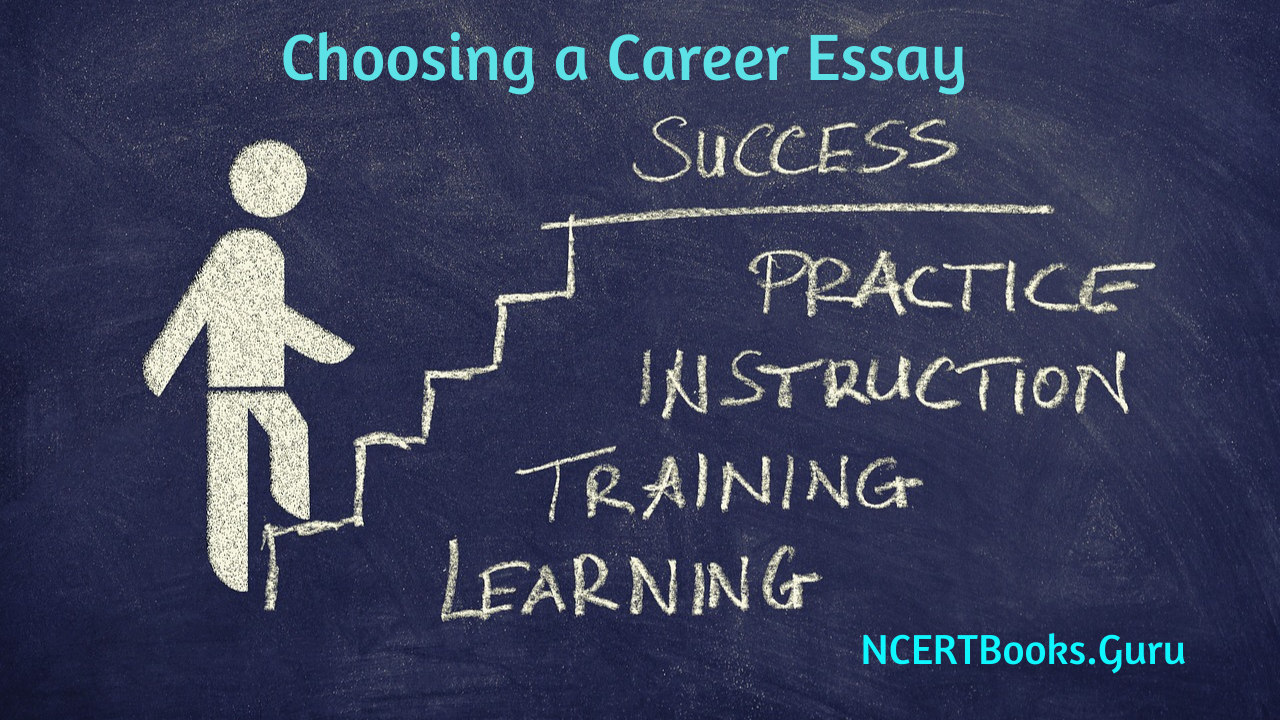 Choosing a Career Essay: The young men or women of today find themselves on the crossroads when the question of choosing a career faces them squarely. This choice ultimately designs his of her life and can become a boon or a disaster. Very few among the youth of today in our country can say with any amount of certainty or determination what career they are going to choose. This lack of decision on their part makes them a rudderless boat and at whatever shore they reach, that becomes their profession and their career. That is very generally the scenario. Engineering or the medical line was once considered as the be-all and end-all of launching on a successful career.

Long Essay on Choosing a Career 500 Words in English

Below we have given a long essay on Choosing a Career of 500 words is helpful for classes 7, 8, 9 and 10 and Competitive Exam Aspirants. This long essay on the topic is suitable for students of class 7 to class 10, and also for competitive exam aspirants.

Every parent looked forward to their children getting into either of these lines. But then, for the past decade or more, the engineering and medical graduates have been found competing for the All India Administrative Services and successfully too. All those precious years of their learning in a technical branch went waste and the nation’s wealth went ill-spent on them and some other one was deprived of the chance who could have entered these professions but missed by a position, which went to those who opted out of it later.

One who failed to qualify at any competitive examination for an administrative service ultimately joined the law course and later became a lawyer. Among the horde of advocates all over the country, if a census is taken, a sizeable number would be found to have joined the profession as the last resort. Though, of course, many of such proved very successful in this career but that was just a chance a fortunate chance for them. That was not a career of their choice but they ‘made the best of it and that is what it was.

An MBA degree, a decade or two earlier, was considered to be a surety of a well-placed career but such has been the mad race for this degree and among the institutes opened at every nook and comer awarding this degree, that now an MBA, degree holder except from the top ten prestigious institutes of the country, is going begging for a job and none heeding them.

Therefore, the choice of a career is really a very challenging factor in a young man’s life. Our educational system has hardly changed and there is hardly any vocational orientation explored in the system. The rut, as of old, continues and grinds the young mind in it to bring him or her to a dead end. Jobs are fewer than the seekers and that creates the situation of a quandary.

The large scale exodus of the youth from the villages to the towns the mirage of which draws them deflects their minds from the land and their youthful energies which could have made their fields yield precious more get wasted and lost in the dark alleys of the towns. Neither do they remain attached to their hearth and home nor are they able to create a liveable home in the town? The type of education that they normally get makes them unfit for the rough and tough of the agricultural life and the living that they are able to eke out in the town hardly suffices for them and their families. The dilemma goes on in this manner.

So this has all been the analysis of the malaise. Now let us seek a solution. 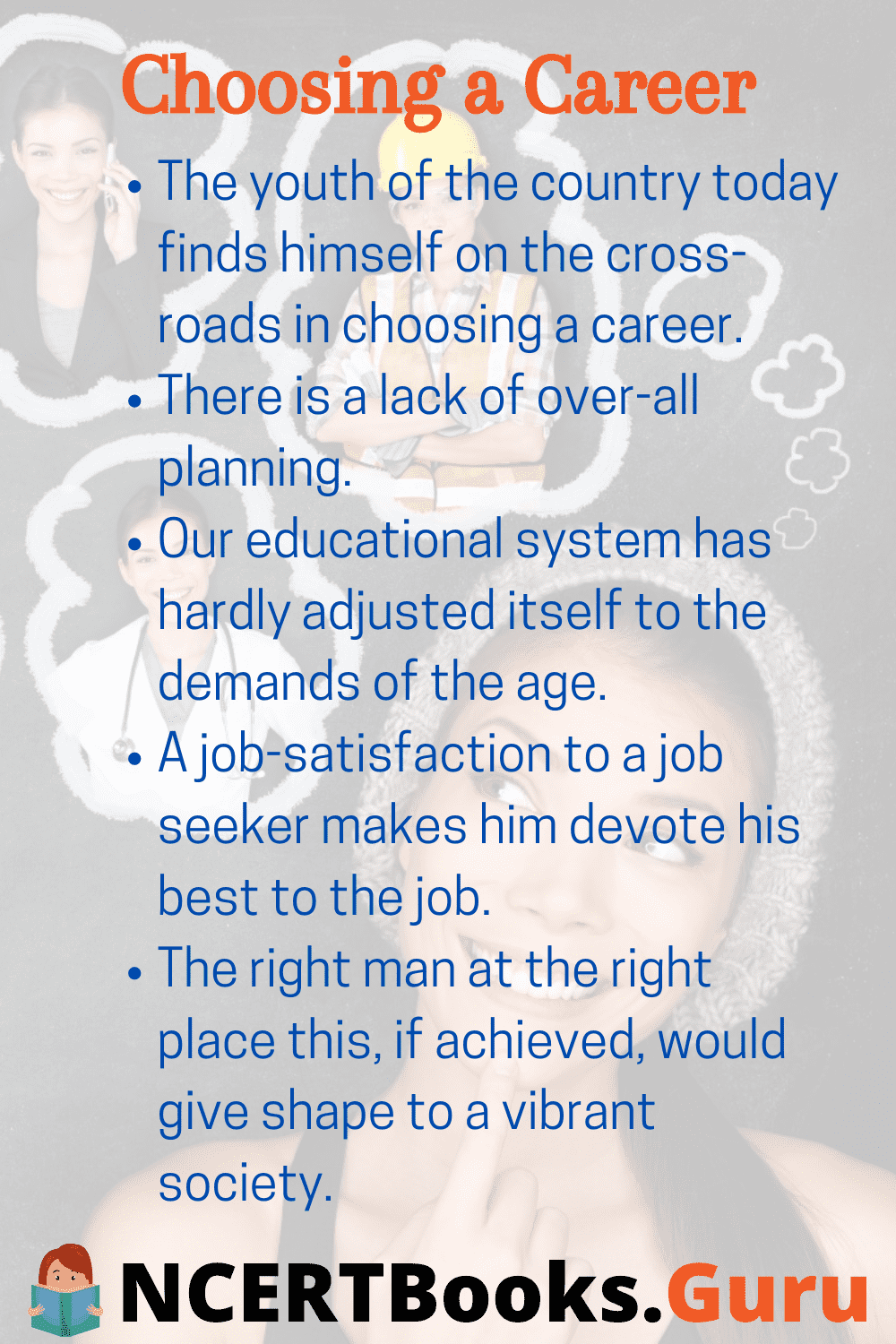 The very first reformation that is required to solve the problem is in the system of education. Education is, of course, a must for every young of a nation. Without that there would be no enlightenment and no progress. Basic education has to be a must. But after the junior high school stage, there should be a diversification of the educational curriculum. Only the scholarly ones should be permitted to go in for formal education.

Technical institutes, as in foreign countries, should be established even for such soiled collared jobs like that of a carpenter, a blacksmith or a mason and only a duly qualified one be permitted to carry on these vocations. Those who be found physically capable of such hard jobs may be allured to join them and a respectable payment to them assured which alone can be allurement for them. There has to be a large scale enlargement of such jobs.

For those opting in for the ‘white collared jobs’, — whether technical or professional or formal, the going should be made tough and costly, and the entry into them made possible only after qualifying at a hard competition. It does not and would not mean that only the children of the rich could opt for such jobs; even the poorer if intellectually bright, could compete for entry into these courses and if found brilliant in competition, they should be granted substantial scholarships for which due provision be made. This would not cause any discrimination so far as merit is concerned. The brilliant would receive the reward for their brilliance and for nothing else.

Short Essay on Choosing a Career 200 Words in English

Below we have given a short essay on Choosing a Career is for Classes 1, 2, 3, 4, 5 and 6. This short essay on the topic is suitable for students of class 6 and below.

Professional counsellors should advise in the choice of a career — that system needs to be evolved so that the youth do not go stray in the wrong careers. Parents should also play their proper role. They should try to judge the potential and the mental predilection of their child and not force them into careers against their mental leanings. There have been cases where a chartered accountant like Shekhar Kapur becomes a successful film director; a graduate in mass communication like Rinki Khanna enters the film career with success.

The field of information and technology has opened up unlimited vistas in so many diversified fields that more and more young men and young women shall find a career in this field very rewarding. More and more emphasis be laid in giving technical training in this field which would not need a very high degree but most of the devices could be learnt through experience. This branch opens up vast vistas of careers — careers not only in metropolitan towns but even in smaller towns even in the rural areas. This is a field which needs to be explored to the full for career seekers.

A carefully chalked out career would make the young mind explore his potential and would make the career rewarding both mentally and financially. That is what a well-chosen career needs to do and shall do if rightly chosen. A job-satisfaction to a job seeker makes him devote his best to the job. That makes the job enjoyable and agreeable and the job, in return, gets the best out of the job doer. This becomes an overall advantage to the nation. The right man at the right place this, if achieved, would give shape to a vibrant society. A disgruntled, frustrated, famished youth is a liability to himself and to the nation. Such a situation needs to be guarded against in the interest of the national good.

10 Lines on Choosing a Career 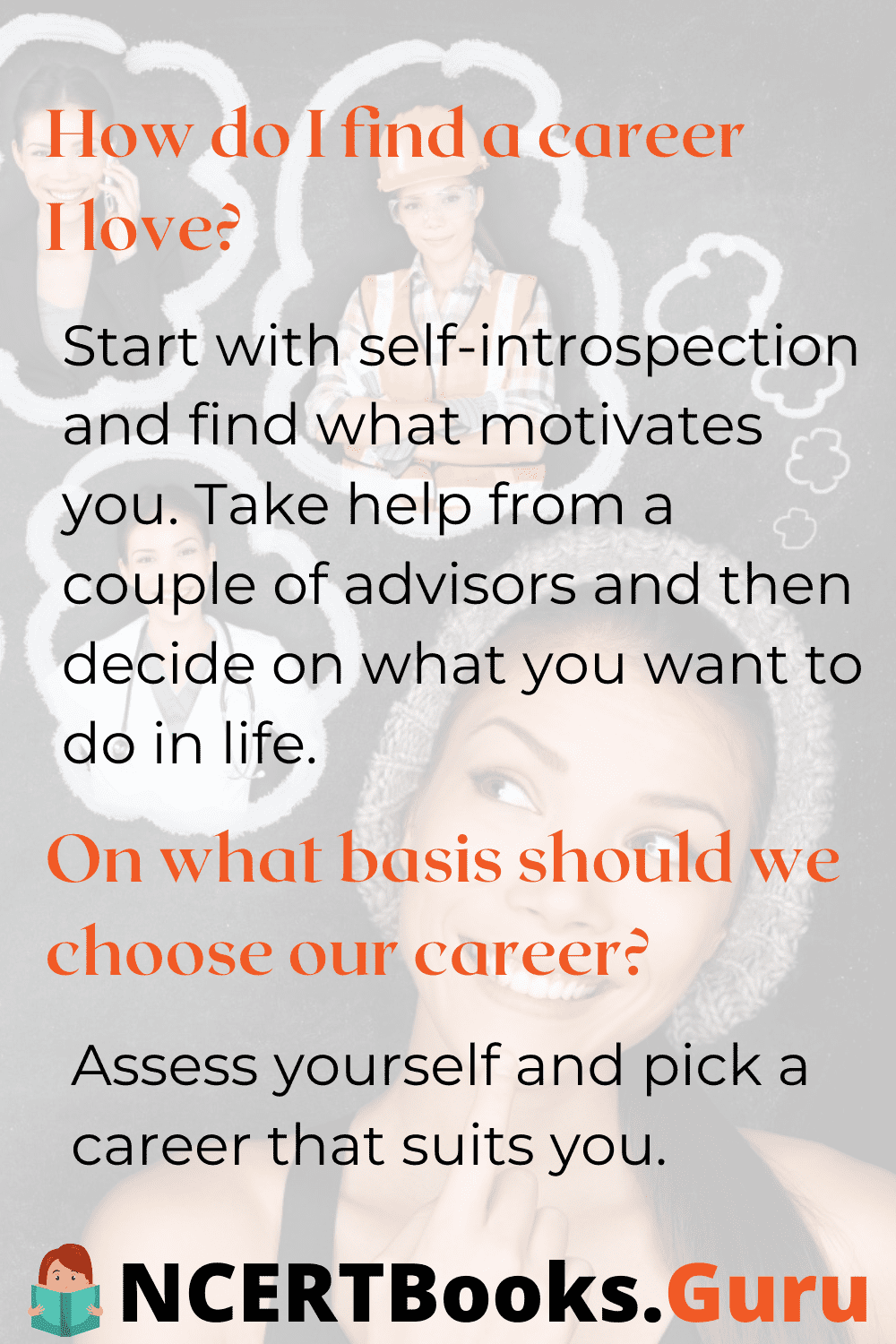 FAQs on Choosing a Career Essay

Start with self-introspection and find what motivates you. Take help from a couple of advisors and then decide on what you want to do in life.

2. What is the most important thing when choosing a career?

Your Happiness is the most important thing when choosing a career.

3. On what basis should we choose our career?

Assess yourself and pick a career that suits you.