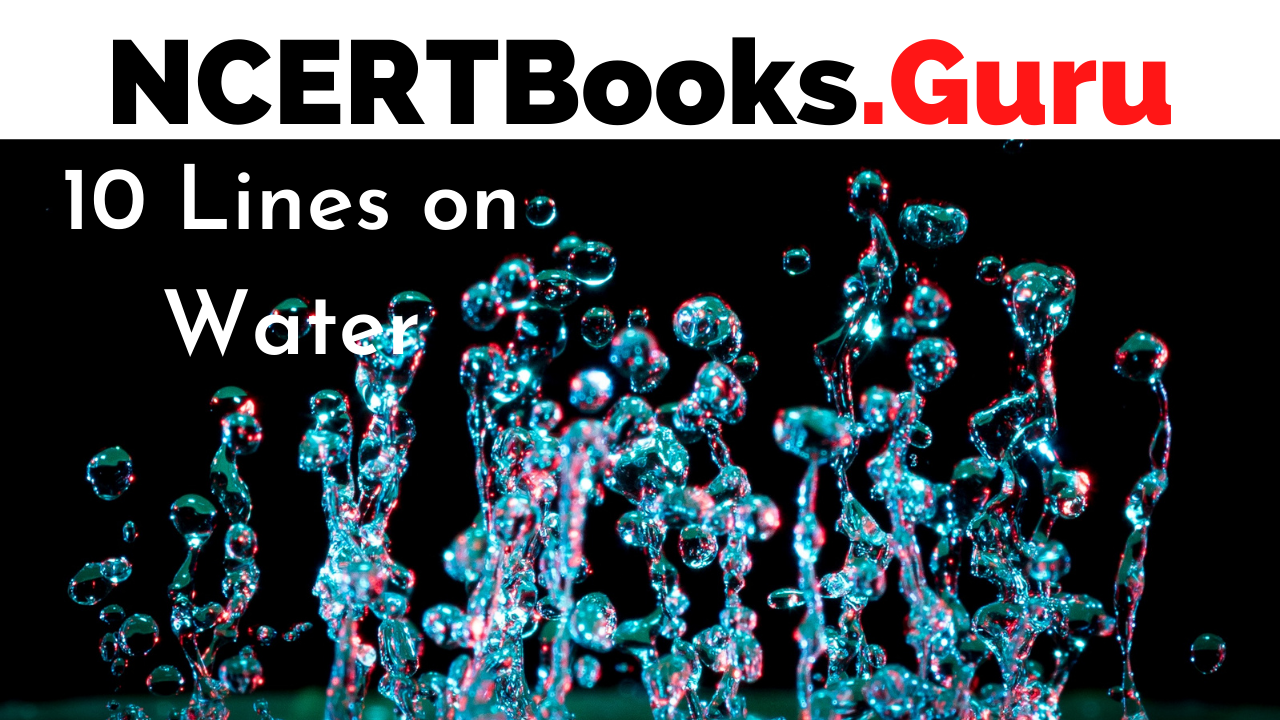 10 Lines on Water: Water is a priceless commodity. It is every individual’s right to access safe drinking water but this is still a dream for many. Water is the reason for the existence of life on our planet. The water cycle regulates its flow and maintains a balance but human intervention has made this abundant resource a threatened one.

Today the quality of water on our planet is questionable. Rivers and lakes which were the sources of freshwater are dumping grounds for human and industrial waste and the water which used to be colourless is now coloured of all sorts. Humans have been using and still are exploiting natural resources. Water is no exception as the demands for water has been ever-increasing.

The rate at which this resource can be replenished is now far lower than the rate at which we are extracting it. We have exploited surface water and are now living off the groundwater which is on the verge of extinction. We have exploited water to fulfil our desires and wants. It is then now our job to conserve this precious resource for future generations to come and allow life to continue on this planet.

Water is important to sustain life on the planet. Around 70% of our planet is covered with water but most of it is salty and present in oceans. Of the fresh water that is fit for human consumption, a major part is locked in the form of glaciers, some as groundwater as rest is available as surface water in rivers, ponds and lakes.

There’s enough water to fulfil everyone’s need but not nearly enough to fulfil human greed. The challenge we are facing today is the effect of years of overexploitation. More than two billion people live in water-scarce regions of the world. A majority part of their time daily is used in fetching water. In other regions of the world, even safe drinking water is like a distant dream. Given below are sets of lines on this priceless resources of nature. It is high time that we humans understand it and start respecting water.

The first set describes the importance of water and its characteristics. It gives basic information about its sources and the causes of its depletion. This set is written to be used by students of primary classes from Class 1-5. 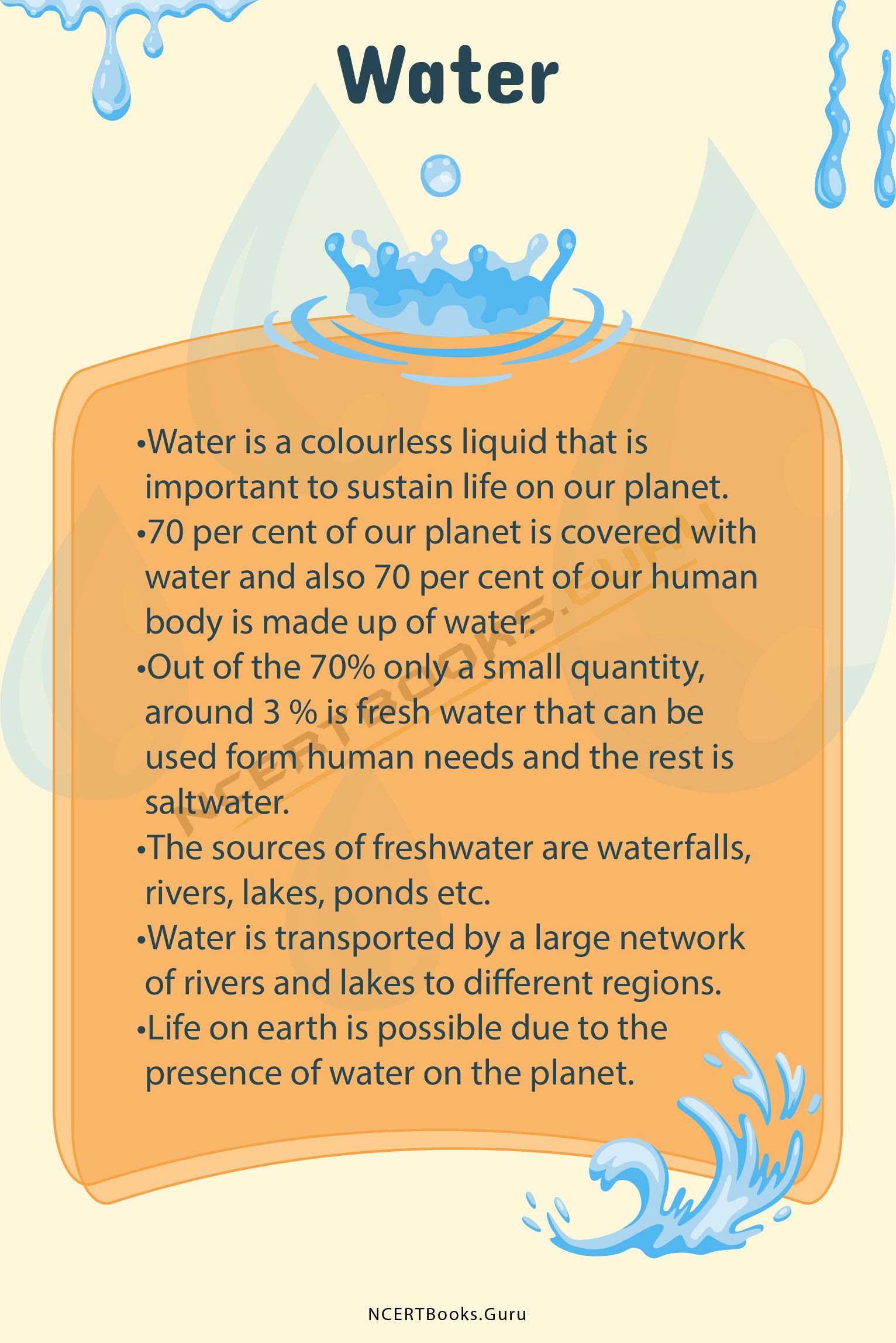 This set is written keeping in mind the students from class 6-10. It contains detailed information about the topic and also raises concerns over the degrading quality of water and the need for it to be recognised as a global concern.

Set 3 points out at the arguments that define the present picture. Students pursuing senior secondary education and above can avail this information and use this for understanding purposes. 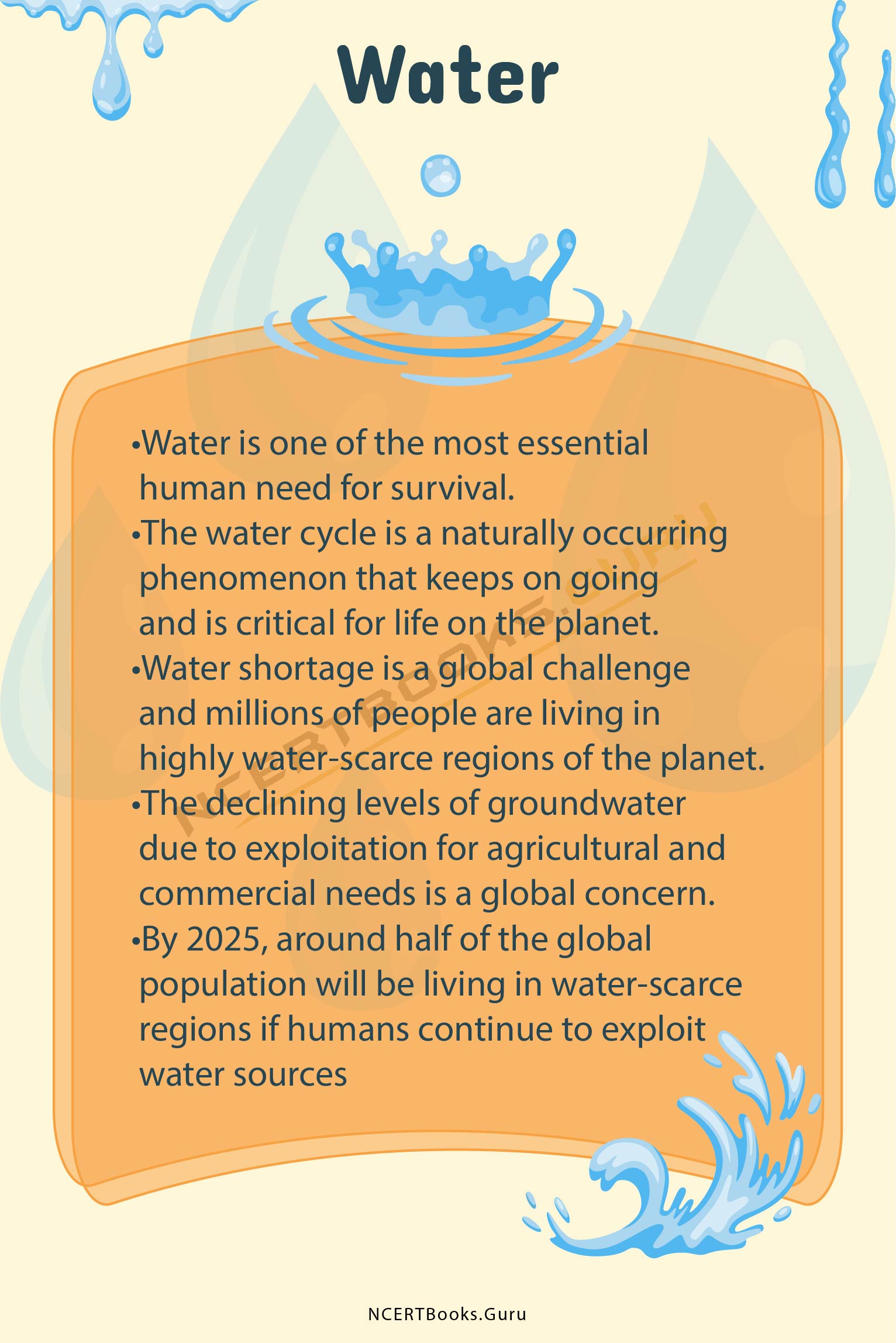 Question 1.
Comment on the importance of Water in our life.

Answer:
70% of the human body is made up of water. It is critical to human survival and for sustaining life on the planet. Water is a colourless liquid that is required in almost every industrial or natural process we know about. The primary purpose of water is drinking. Even then drinking clean and safe water is a privilege we don’t understand.

The majority part of freshwater is used to put the food on our tables. Water is used in the manufacturing of every product we use. Not only humans, plants, animals, microorganisms and ecosystems survive due to the availability of water on the planet. Humans are spending trillions on a space exploration mission in search of life and water, but can’t look at this priceless resource and its overexploitation around us.

Question 2.
What are the various reasons for degrading the quality of water on earth?

Question 3.
Explain the overexploitation of Groundwater.

Answer:
Groundwater is present in the deeper ground levels and is a clean and safe water source. With the advancement in technology, humans can easily access this resource but it leads to overexploitation of this resource. People have water motors which can access this source of water and that is one major cause for declining groundwater levels in several major cities of the world.

Overexploitation of groundwater for agricultural uses has lead to a sharp decline in several water-rich regions of the globe. According to studies in the past few decades, the water levels have gone seriously down as the rate at which these are replenished is much lower than the rate at which the water is being extracted.

Question 4.
What is our role as citizens of the country and humans on this planet?

Answer:
Water is our basic need for survival. Clean and safe drinking water is everyone’s right. Many people living in the water-scarce regions of the globe understand the importance of water far well than the ones who can easily access it through taps. We all need to understand this global concern and play our part in conserving water.

Cities like Capetown when they came close to day Zero, the people worked in harmony and understood their role as citizens and were able to avert a major crisis that was only possible due to combined and consistent efforts. By taking small steps at our level we can play our part and this also puts pressure on the government and the authorities to apply robust regulations on exploitation on water.