River Tapi, also known as Tapti originates in central India between and channel as the middleman between the rivers Godavari and Narmada. River Tapi channel towards the west side before draining into the Arabian Sea. The River has a length of 724kilometre and flows through three distinct states- Maharashtra, Gujarat, and Madhya Pradesh. The three primary tributaries of River Tapti are Purna, Panjhra, and Girna.

Tapi River, also known as Tapti, is a river in central India, rising in the hills of Gawilgarh located in the Central Deccan plateau in South-Central of Madhya Pradesh. The River flows in the westward direction between two spurs of the Satpura Range and courses across the Jalgaon plateau region in the state of Maharashtra and then rushes towards the plain of Surat in the state of Gujarat and finally, to the Gulf of Khambhat- an inlet of the Arabian sea.

The Tapi River flows parallel to River Narmada to the North, from which it gets separated by the central part of the Satpura Range. The intervening range and the valleys of the rivers form the natural barrier between the Peninsular and Northern India. Tapi River holds three primary tributaries- the Girna, Panjhra, and Purna that flow from the south in the state of Maharashtra.

The Tapi river originates from the Betul district in a place known as Multai. The word Multai is an amalgamation of Sanskrit words which means ‘the origin of Tapi Mata’. The total length of River Tapti is around 724 kilometre and drains an area of 30,000 square. Metre. According to Hindu mythology, the name- Tapi is derived from the word of the Goddess Tapi, the daughter of Lord Surya and  Goddess Chhaya.

The history of River Tapi is deeply associated with the history of the places through which it flows across. Western India’s River starts its origin in the Betul district of Madhya Pradesh and then channels its movements between the spurs of the Satpura Hills, across the plateau of Khandesh, followed by the plains of Surat, and finally merges with the Arabian sea.

The history of the River is closely associated with its Anglo-Portuguese account. The upper reaches of the Tapi river are recently deserted as the region faces silting at the outflow of the River, and therefore, is not used for irrigation purposes.

Tapi River, also known as the Tapti River is the major River in Central India and originates at Multai, Madhya Pradesh. The River stretches at a length of about 724 kilometres and is considered to be one of the most important rivers in the whole of peninsular India.

The catchment areas of the River is principally located in the Northern and Eastern Districts of the state Maharashtra, including Washim, Jalgaon, Akola, Nandurbar, Amravati, Buldhana, and Nashik districts.

The River Tapi rises in Central India and is one of the prominent rivers of the Northern and Peninsular India. Tapi River stretches at the length of around 724 kilometres and is the only river that runs from the East to the West.

The River Tapi is the second-largest inter-state river basin that shifts towards the westward side covering a large area in Maharashtra besides the areas of Madhya Pradesh and Gujarat. The River drainage covers an area of 65145 square. kilometres out of which almost 80 per cent of the region lies in the state of Maharashtra.

The Tapi receives several tributaries on both banks and homes almost 14 significant tributaries. However, the drainage system present on the left bank of the River Tapi is more extensive than the right bank area of the River.

One of the primary and significant contributors to pollution loads are the largely untreated industrial effluents and urban waste. The total BOD load is about 488 tons per day, that is, about 39 per cent and this part are highly contributed by the urban domestic wastewater and the 21 per cent contribution followed by the surrounding industries.

The total carry-over amount of the nitrogen and potassium compounds are about 10 per cent, and this problem was aggravated during the months of summer when the river flow is considerably reduced.

The historical importance of the River Tapti dates back to the earlier times when the Tapi River at Surat played a vital role as the major ports were used frequently for exports of several goods. The Rive Tapi was also an essential halt destination for Muslim pilgrimage called Haj to Mecca.

A significant feature of the River Tapi is that the river sets apart from other Indian rivers as it drains into the Gulf of Khambhat. River Tapti has a very high-quality and richly fertile soil that is highly suitable for agricultural activities and is the most significant advantage for the farmers residing in the area.

The tribal and rural population around the Tapti River helps the people to harvest a large number of chief crops and sell it in the market to earn their livelihood. The River is also heavily used for irrigation reasons. The River also provides a means for transportation for the people living on the river banks.

The Tapi River is the home to the natural habitats of several wild and exotic animals including tigers, lions, snakes, sloth, bears, and many more.

Tapi river is one of the many rivers in India. The River rises in the Satpura Mountains in the Betul district of Madhya Pradesh and channels its 724-kilometre long course through the states of Madhya Pradesh, Maharashtra, and Gujarat before finally merging into the Gulf of Khambhat. The River Tapi is situated at the centre of the Deccan plateau, thus known as the river of Central India.

The point of origin of the River is the Satpura range, one of the most favourable habitats and homes of several wild animals. The River is named after Hindu mythology  Goddess- Goddess Tapi, daughter of Lord Surya and Goddess Chhaya.

The last 51 kilometre of 32 miles is a tidal region but navigable by small vessels. At the River’s mouth, a well-known deserted Anglo-Portuguese port known as the Port of Swally Hole is located.

The River forms a barricade between the two river valleys and the intervening range between the Northern and Peninsular India. The River comprises three major tributaries- the Panjhra, Girna, and Purna, which flow from the south in the state of Maharashtra.

River Tapti has a significant extent of religious and cultural importance and has rich, fertile soil that is highly suitable for agricultural activities. However, the Tapi River supports several class-I towns that are well-known for their industrial activities. 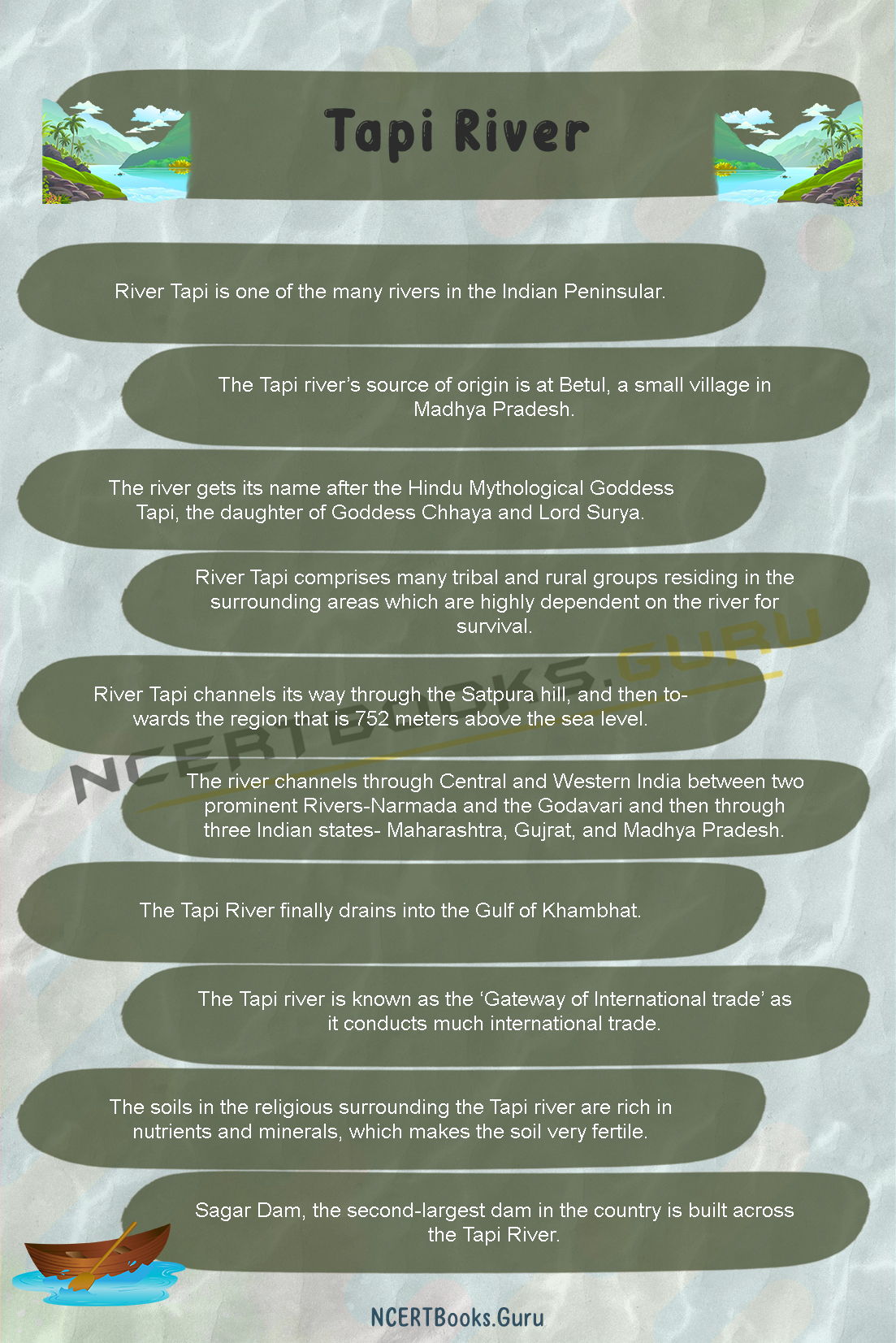 Question 1.
Where does the name ‘Tapi to Tapti’ come from?

Answer:
The name ‘Tapi’ is derived after the Goddess Tapi, the daughter of Goddess Chhaya and Lord Surya from the Hindu Mythology.

Question 2.
State all the main tributaries of River Tapi.

Question 3.
Which dam is built over the Tapi River to provide water to the surrounding areas?

Answer:
The second-largest dam in the country is the Sagar Dam which is built across the Tapi river.

Question 4.
Name two features that highlight the importance of the River Tapi.