Soil Pollution Essay: Soil is the topmost layer of the earth’s surface which sustains life on the planet. Without oil, there would be no life on earth as we know it because the soil has the essential ingredients that living things need in order to grow and survive. Soil is usually made up of two components, organic materials, and inorganic matter. Organic matter is formed over millions of years by the decaying of dead plants and animals. Inorganic matter is formed due to weathering of rock particles into finer materials.

In this soil pollution essay, we are going to discuss all the usages of soil and how soil is getting polluted day by day.

In this article, we have provided a 600-word essay on soil pollution and a 200-word soil pollution essay for children and students to make use of it in their tests, exams, assignments, projects, and essay writing competitions. Find below 600-word soil pollution essay in English for kids and students of Classes 7,8,9 and 10.

Soil is that natural resource in our ecosystem that can be compared to oxygen because the soil is as important as oxygen for the survival of living beings on the planet. Soil is the top layer on which plants and trees grow to provide food to animals, animals, in turn, live on the soil their entire lives. Human beings cultivate the soil to produce food. The whole cycle of the food chain is standing stable and healthy because of the soils. The importance of soil is many, some of which are mentioned below.

As seen above in this particular soil pollution essay, the importance and usages of soil are in itself a detrimental factor for the cause of pollution. Man has been overexploiting soil and uses it for his own benefits backed by greed and hunger. Let us see below in this soil pollution essay on how soil has been exploited.

How does Soil Pollution Occur?

Now that we have learned the importance of soil, let us discuss the various forms of soil pollution in the world. Soil pollution has been a problem ever since rapid industrialization and globalization. Governments, as well as people, should come forward to implement robust laws and policies to prevent soil pollution from happening further.

Soil is the uppermost layer in the earth’s stratum. Soil enables and sustains life on the planet, without which there would be no living beings on the earth. But lately, due to mans’ greed and irresponsibility, soil pollution has become a dangerous phenomenon, if not controlled would lead to catastrophic effects our atmosphere and food cycle in the future.

Wrong agricultural practices, dumping of harmful wastes, and garbage disposal on open lands, rupturing of underground storage tanks, industrial waste disposal are some of the many reasons that are causing soil pollution. A polluted soil, which has no nutrients and useful chemicals in it, is no use to human beings, plants, and animals, resulting in leaving behind that land and searching for newer ones. This search for a new piece of land in order to cultivate it results in deforestation. Deforestation will further result in soil erosion, melting of glaciers, global warming, floods, and various other calamities. Every chain is linked with one and another in nature and disturbance in one of the links will result in a disturbance in the whole chain. 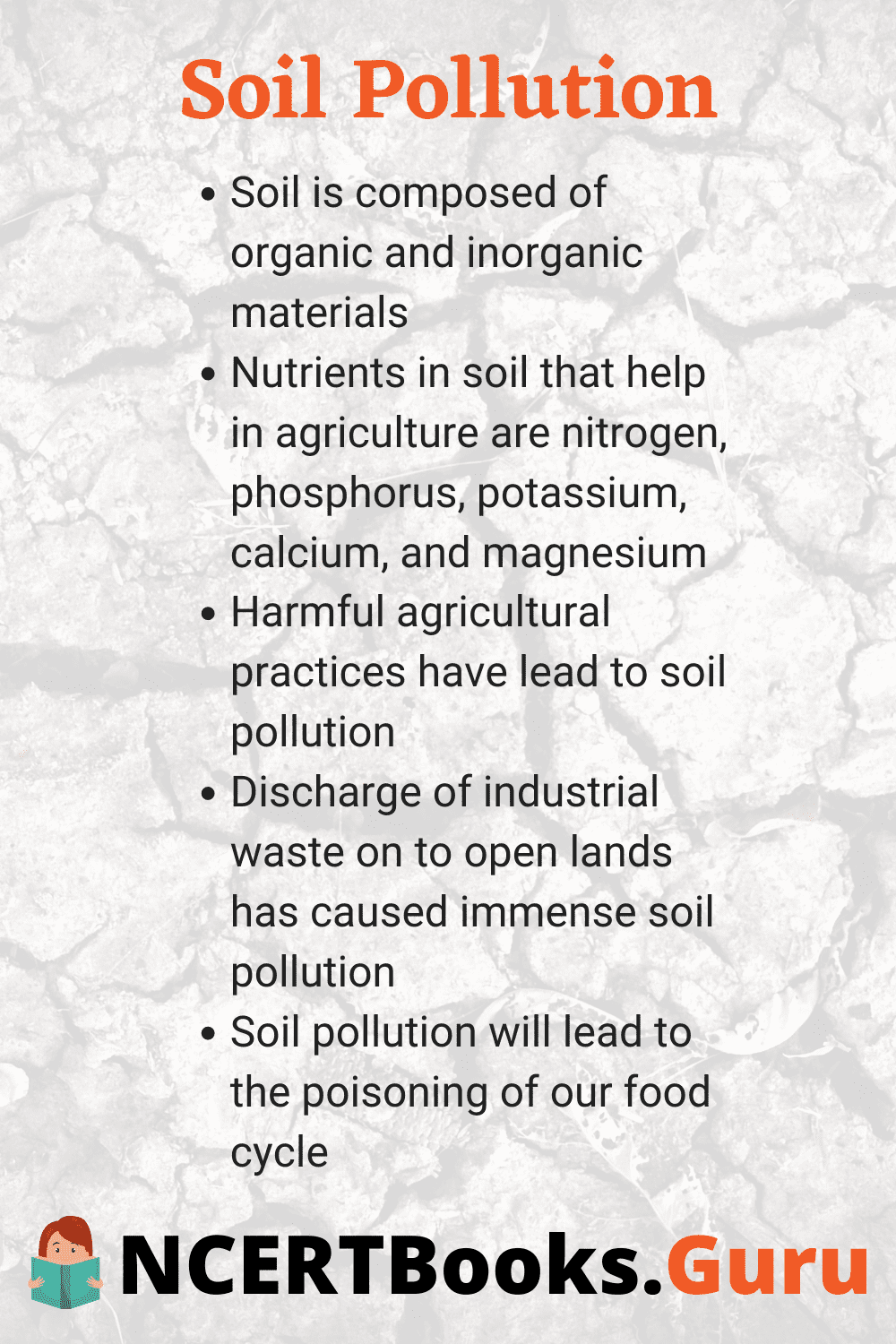 Question 1.
What are the types of pollution?

Question 2.
What is the biggest source of soil pollution?

Answer:
Agricultural practices are the biggest source of soil pollution.

Question 3.
What are the main pollutants in soil?

Answer:
Ammonia, lead, nitrate, and petroleum hydrocarbons are the main pollutants in soil.

Question 4.
What are the different types of soil in India?

Answer:
Sand, clay, chalk, silt, and loam are the main types of soil in India.