Slums in India Essay: Slums around and within the big towns are a growing problem in our country. People migrating from the villages, attracted by the glamour of town life; come to the towns with no roof over their heads, no habitation to keep them indoor. They take up odd jobs — rickshaw pulling, vegetable selling or any such job that comes their way and then where to stay, what to do? They gather together some pieces of wool or cardboards, encroach upon a piece of land found lying vacant, raise semblance of walls and cover them with pieces of cloth or anything that they find, sack or rags or plastic sheets and that becomes their home. Two, three or even four shares that so-called habitation. 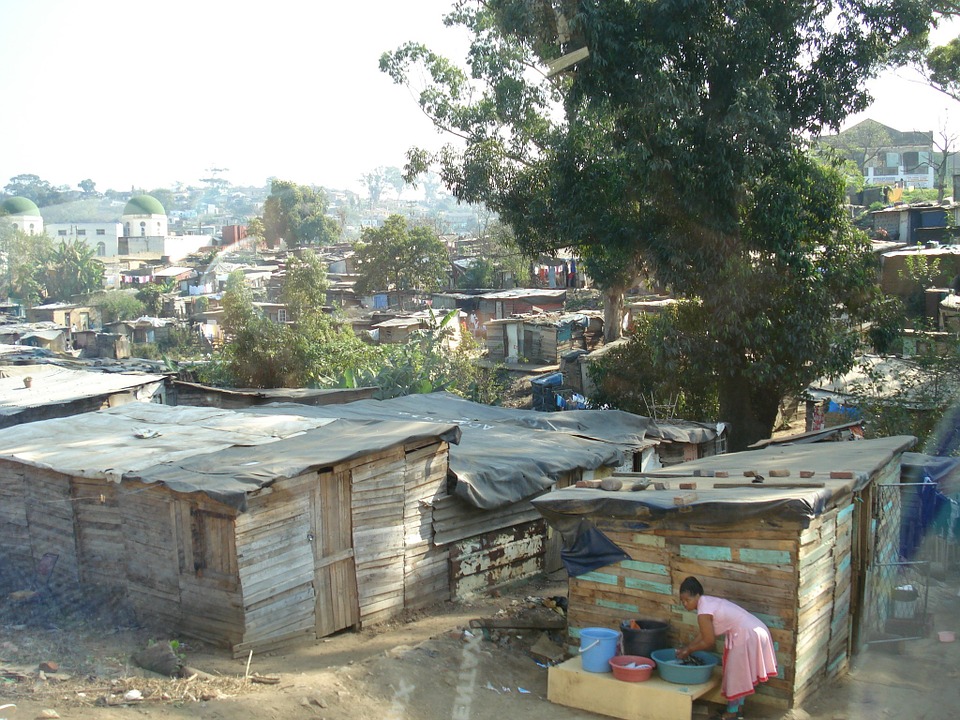 Long Essay on Slums in India 500 Words in English

Below we have given a long essay on Slums in India of 500 words is helpful for classes 7, 8, 9 and 10 and Competitive Exam Aspirants. This long essay on the topic is suitable for students of class 7 to class 10, and also for competitive exam aspirants.

This is how one after the other such shanties rise up, cluster together and form into a slum. Gradually with some money earned, they manage to instal a hand pump, or even take a water connection from the nearby pipeline, use the adjoining open fields as their toilets, cook their own meals after the day’s labour or before their day begins and thus goes on their life this is how slums grow and this is why they come up. Once they come up, one after the other, here, there, everywhere, the political big-wings turn them into their vote-banks and then who can uproot them. They develop political clout.

The story of slums goes on like this they are here, there and all around in big cities and now have begun to develop within and around even smaller towns. They are a slur on our society everyone knows it, even the highest in the authority know it and slowly and gradually efforts begin being made to regularise them, to legalise their unauthorised occupation. 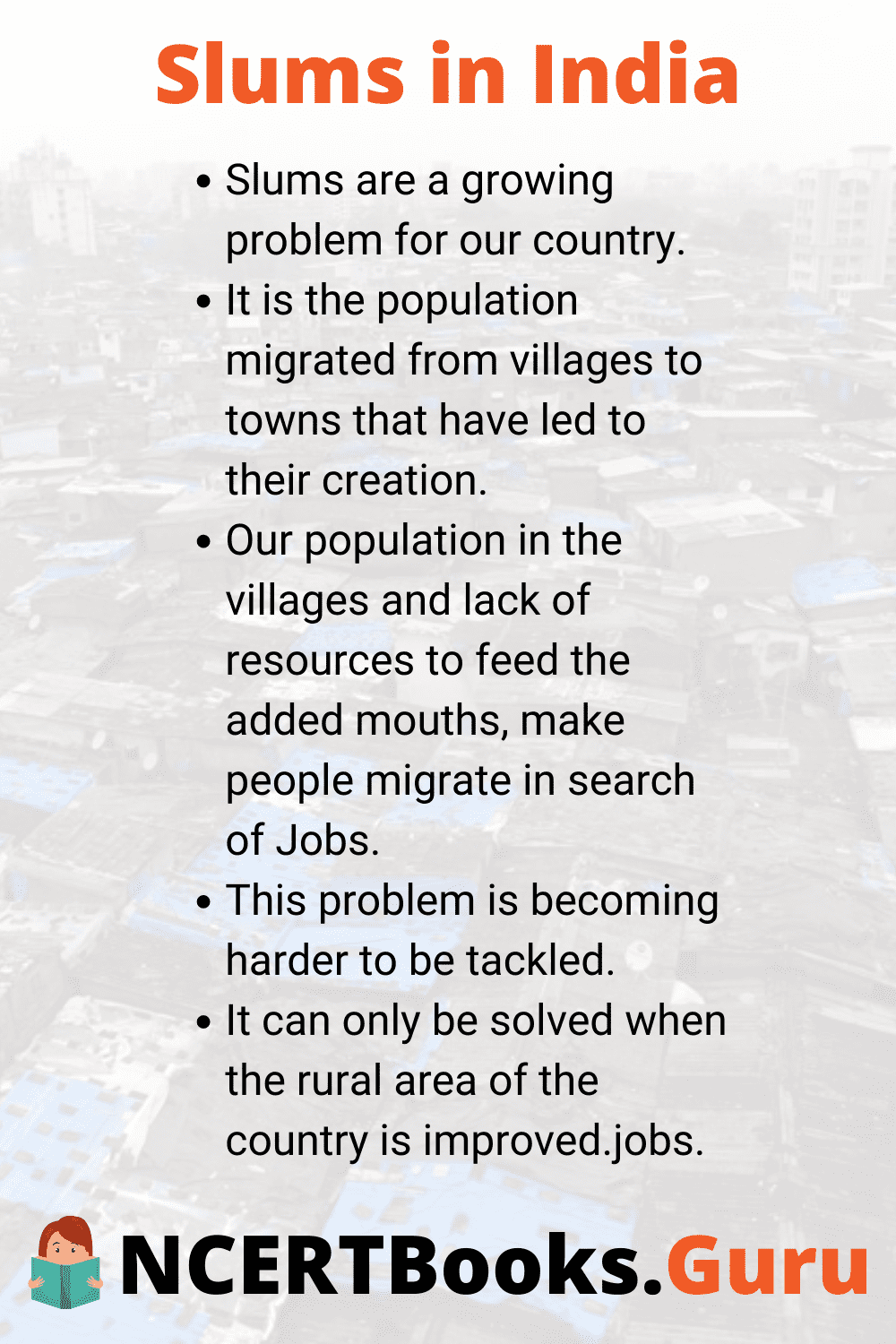 Why should such slums come up? The reason is that the population, particularly in rural areas is fast increasing. The population there has no family-planning programme for their families. The agricultural land with a family remains the same while the mouths to be fed have grown. How to feed these additional mouths?

This needs additional income. No industries or occupations are growing in the rural sector the country’s economic policy being lopsided, it is concentrating on large scale industrialisation. These need labour the needy villager is quick to be cheap labour and gets drawn to the town.

The town life has its added attractions more entertainment, more avenues of recreation once in town the village Youngman gets not only lured to them but gets addicted to them. This makes him to stay on. Then he makes a home, gets his wife and children and a bigger slum-dwelling is created. The wife also works as a daily wage earner, even the children begin to work as domestic help or as rag-pickers. Some of them even turn into small-time thieves and pick-pockets. Thus goes on the life in the slums.

Short Essay on Slums in India 200 Words in English

Below we have given a short essay on Slums in India is for Classes 1, 2, 3, 4, 5, and 6. This short essay on the topic is suitable for students of class 6 and below.

Those who have stayed on for some time and had made some money, forget about their village life. They manage an illegal electric connection and there are hundreds and thousands of slum-dwellers who own coloured T.Vs. Where can they get such entertainment in their rural homes? Those in the villages learn of these achievements and acquisitions and they also get lured to come to town.

How dirty, how unhealthy, how obnoxious is the living in these slums — it can only be known when seen; can hardly be imagined. Most unhealthy living conditions, most unhygienic atmosphere — drains, lanes, dogs and pigs, littered filth diseases and even deaths on that account still slums stay on.

This problem is becoming harder to be tackled. It can only be solved when the rural area of the country is improved. More means of employment to the rural population, cottage industries and the proper marketing of their products; electricity reaching the villages; means of entertainment available then only the attraction of town life can be lessened and population migration from villages to towns be minimised. This situation alone can solve this problem of growing slums.

10 Lines on Slums in India 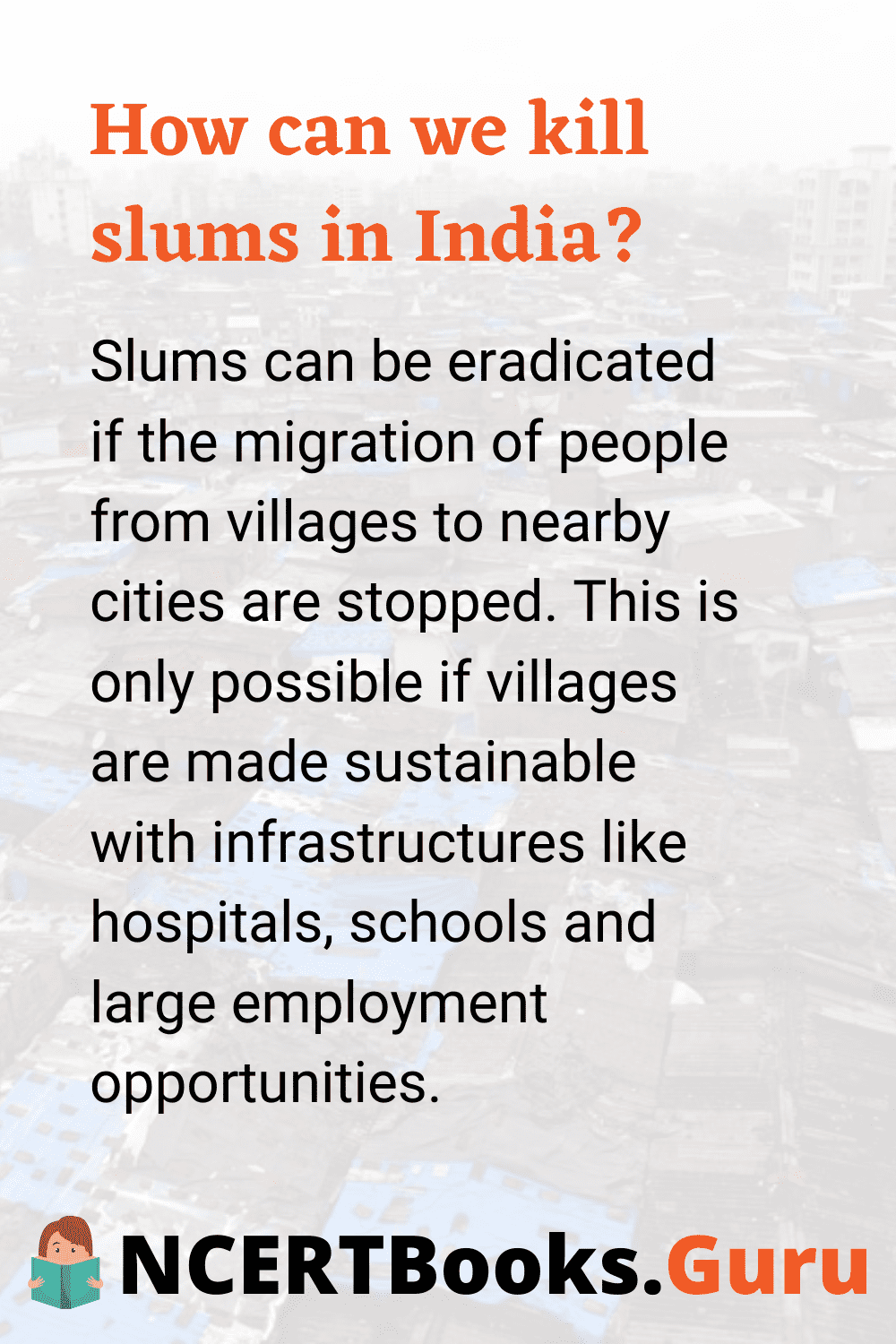 FAQs on Slums in India Essay

2. Which is the biggest slum in India?

Dharavi is a locality in Mumbai, Maharashtra, India, considered to be one of Asia’s largest slums.

3. How can we kill slums in India?

Slums can be eradicated if the migration of people from villages to nearby cities are stopped. This is only possible if villages are made sustainable with infrastructures like hospitals, schools and large employment opportunities.