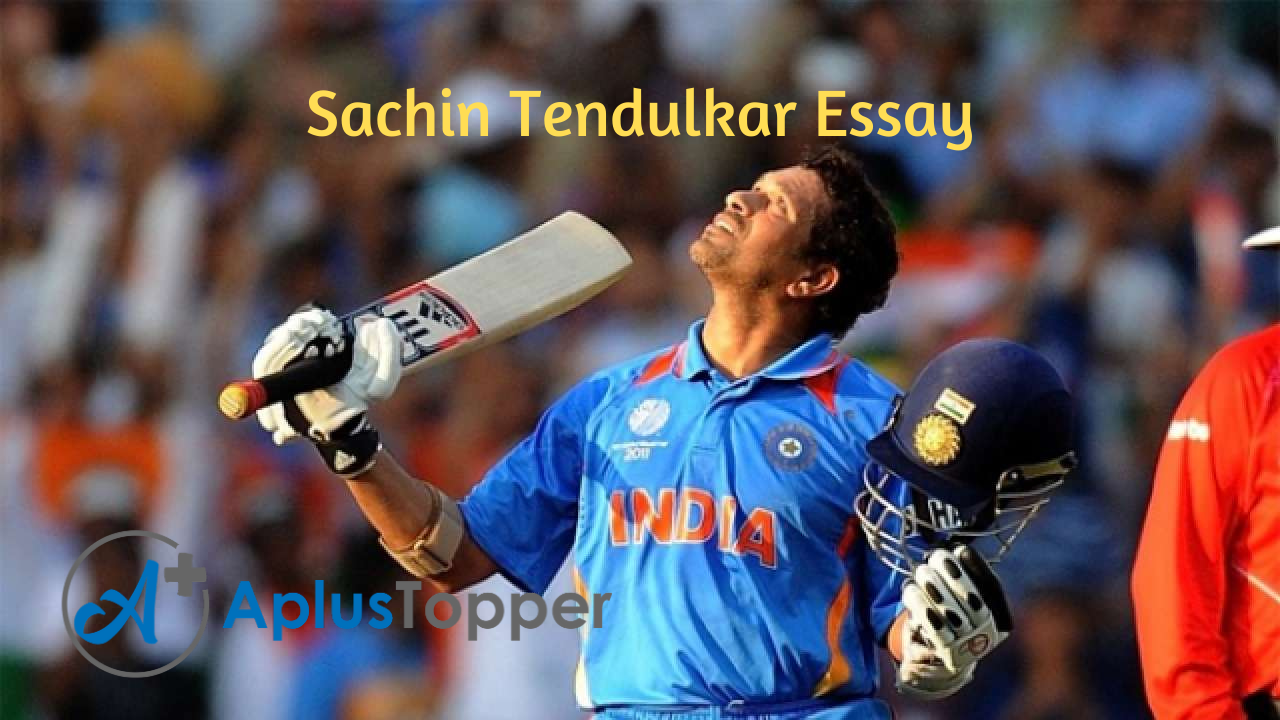 Sachin Tendulkar Essay: Sachin Tendulkar is undoubtedly one of the greatest sportsman that India and the world has ever seen. His prowess on the field and his humility off it, makes him stand out as a role model for many. – The God of Cricket

“I have seen God. He bats at no. 4 for India in tests.” -Matthew Hayden

Below we have given a long essay on Sachin Tendulkar of 500 words is helpful for classes 7, 8, 9 and 10 and Competitive Exam Aspirants. This long essay on the topic is suitable for students of class 7 to class 10, and also for competitive exam aspirants.

The living legend of the cricket-world and a batsman par excellence was born on 24th April, 1973 in Mumbai in a middle class family, as the youngest of four children. His father was a well known Marathi novelist and his mother worked for an insurance company. In fact, he was named after the family’s favourite music director, Sachin Dev Burman. He was sent to Sharadashram Vidyamandir School where the fever of cricket caught him at the tender age of 11. In a match for Harris Shield, he made a huge partnership of 664 runs with his friend and international team-mate, Vinod Kambli. In 1988, he scored a 100 not out, his first-ever century in a first class match for Bombay against Gujarat. His first international appearance was against Pakistan at Peshawar, in an abandoned one-day match where he crushed Abdul Qadir and Co. He made his international debut at the age of 16 against Pakistan at Karachi where Waqar Younis bowled him out at a mere score of 15 runs.

Incidentally, Waqar Younis too had made his debut in that very match. In the next innings, he scored his maiden test 50 at Faisalabad. However, the rest of the series went by quietly, but by then Sachin had showed all the potential signs of a great cricketer. The determination, the strong will power, the ease of this young lad from Mumbai, against such a tough side impressed one and all.

His One Day International debut was even more disappointing. This time Waqar Younis dismissed him without any run. He then went on to a tour of New Zealand where he was caught at 88 by the former Indian Coach, John Wright. Tendulkar here lost a chance of becoming the youngest centurion in Test cricket.

Later in 1990 in his tour of England, he finally scored a Test century. But it was in 1991-92 during his tour to Australia that he made his presence felt as a true and a great batsman.

Since then Sachin has performed remarkably and played cricket- both in and outside India. He has been selected as the Man of the Match 13 times in Test cricket and four times as the Man of the Series- both times in Border-Gavaskar Trophy against Australia. Sachin’s first ODI century was made on 9th September, 1994 against Australia at Colombo. His performance has been beyond imagination with a great record of 51 Test centuries and 48 centuries in One-Day Internationals.

Sachin has become a sports icon for not only the youngsters of the nation but also across the globe. At a young age of 19, Sachin was invited as an overseas player by the Yorkshire County of England for the first time in 130 years. He also has to his honour the highest number of runs in One-Day Internationals and the maximum number of centuries in both One days and Test cricket. In India, this star shone even more brightly. In a country suffering from economic crisis, he was hailed as a symbol of hope. A newspaper dubbed him as the ‘Last Hero’ for his home country. In December 2005, he made his record breaking 35th century in Test cricket. In June 2007, he became the first player to make 15,000 runs in one-day internationals.

In 2010, he again stormed the record books, when he became the first batsman to score 13,000 runs in Test cricket. Just one month later, he cracked a double century against South Africa. He was named the ICC Cricketer of the year 2010.

Although, he is a top-order batsman, rather an opening batsman to be exact, Sachin has proved himself useful for the country at any position. He has also proved to be an effective wicket taker in time of need as an off-break bowler. Sachin is at his best even at taking wickets. He has 45 Test wickets to his credit and has a bowling average above 40. He also has another record of playing Test Matches on 52 different grounds ahead of Azharuddin and Kapil Dev. Moreover, he holds a record with Brian Lara to score the fastest 10,000 mighty runs in just 1 95 innings. 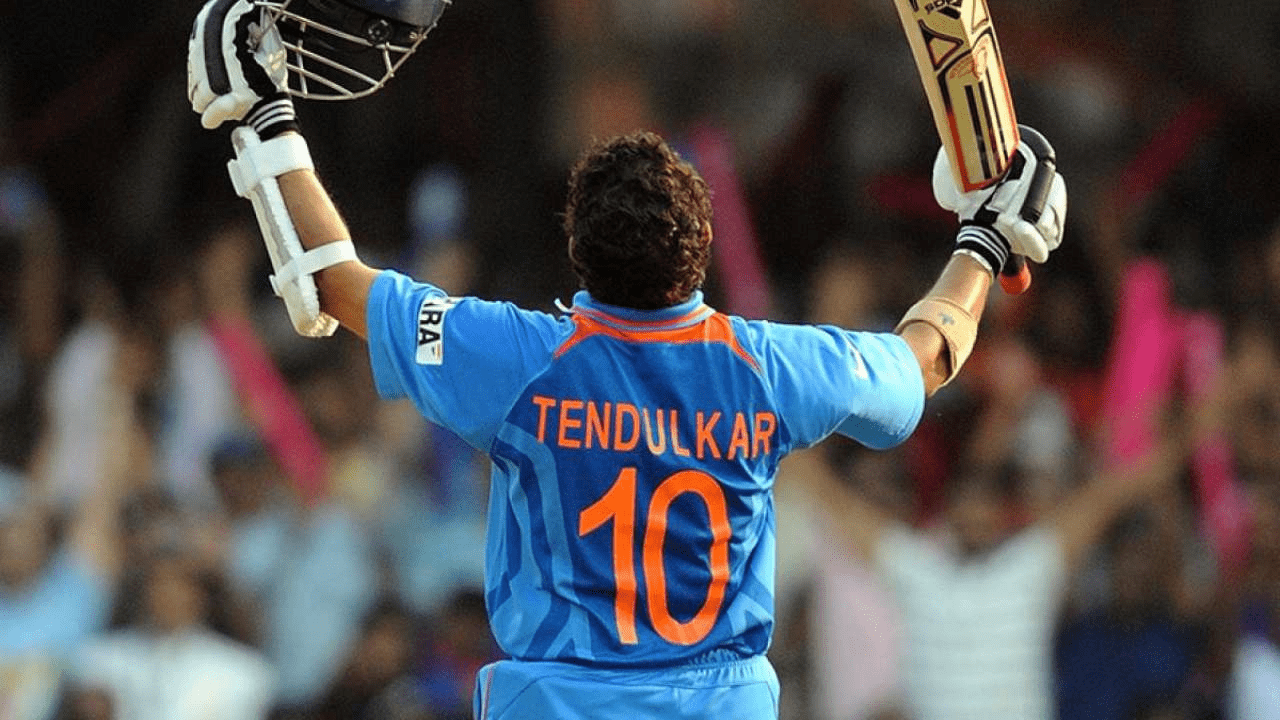 Below we have given a short essay on Sachin Tendulkar is for Classes 1, 2, 3, 4, 5 and 6. This short essay on the topic is suitable for students of class 6 and below.

In the 2011, World Cup tournament Sachin contributed 482 runs, including two centuries. After India defeated Sri Lanka in the finals and lifted the World Cup Trophy, Sachin commented, “Winning the world cup is the proudest moment of my life… I couldn’t control my tears of joy.” He scored his much-anticipated 100th international century on 16th March, 201 2 against Bangladesh. He became the first cricketer to achieve this mark. In the Indian Premier League scenario, he smashed Shaun Marsh’s record of maximum runs in a season.

He also won the titles of ‘Player of the tournament’, ‘Best Batsman’ and ‘Best Captain’ awards. The ‘Little Master’ announced his retirement from ODI’s in December 2012. In November 2013, he retired from all forms of cricket. In 2014, he was appointed as Mumbai Indians team’s ‘icon’.

In 1997, he was awarded the Wisden ‘Cricketer of the Year’ and again in 1999, 2001 and 2002- Sachin, in fact, is the only player to score a century in Ranji Trophy, Duleep Trophy and Irani Trophy debut Matches. He has also been awarded the country’s highest sporting honour-The Rajiv Gandhi Khel Ratna in 1997-98.

He has been given the Padma Shri in 1999. In 2002, he was chosen as the ‘Asian Hero’ and appeared on the cover of the famous Times magazine. Recently, he has been awarded the Bharat Ratna, in 2014. He also has a heart of gold. He sponsors 200 underprivileged children every year. He raised funds for a crusade against Cancer and Support My School. On personal front, Tendulkar is married to Anjali Mehta, a Gujarati doctor in 1998. Sachin has been a devout family man and has been blessed with two children Arjun and Sara. Sachin though being in the cricketing lime-light has guarded his private life with great sanctity. Today, Tendulkar is the hero of an average Indian child. He is idolised and worshipped by millions of fans over the world and will continue to be so for years to come. As he says:

“Enjoy the game and chase your dreams. Dreams do come true.”