Republic Day Essay: January 26, is the day on which our country celebrates the Republic Day. It was on this date that independent India adopted the constitution in the year 1950. The Draft Constitution was framed and was ready by February 1948 but it was formally adopted on January 26, 1950, declaring India in the preamble of the constitution as a Sovereign Socialist Secular Democratic Republic. January 26 has sentimental importance for our country. It was on January 26, 1930, that the Indian National Congress had declared the demand for complete independence in the session held in Lahore. It was, therefore, that India as a Republic came into existence on January 26, 1950. Ever since then January 26, every year is celebrated as the Republic Day. It is a great celebration and a grand show. 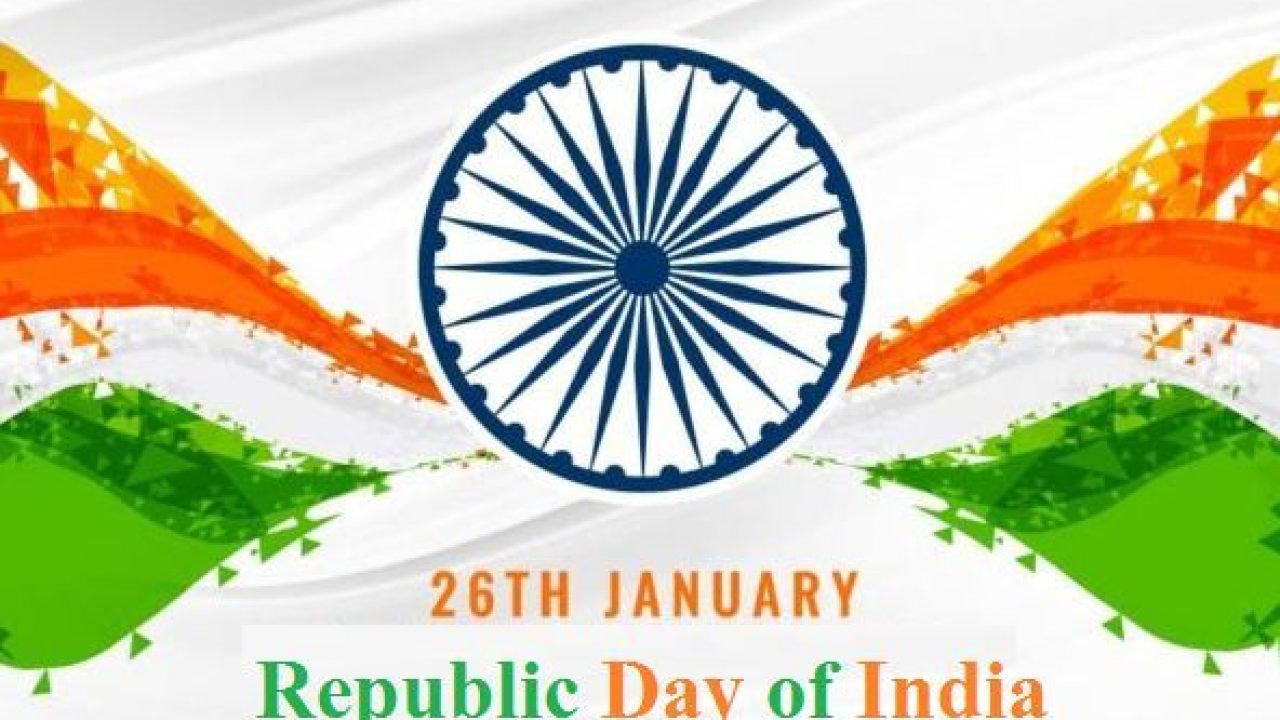 Below we have given a long essay on Republic Day of 500 words that is helpful for classes 7, 8, 9, and 10 and Competitive Exam Aspirants. This long essay on the topic is suitable for students of class 7 to class 10, and also for competitive exam aspirants.

On this Day, a special function is arranged on the road named as the Raj path. This is the ‘path’ which runs between the India Gate and Rashtrapati Bhawan. On both flanks of this broad road track, amphitheatrical benches are arranged for the public to sit and watch the show which goes on for some hours. Some foreign dignitary — the President of any friendly country is invited to be the Chief Guest, who along with the President of India receives the salute of the army contingents, the police personnel, the NCC cadets, the school children. The whole show presents a grand spectacle and a running commentary over the show goes on which is relayed over the All India Radio and visually displayed on the T.V.

This is the day on which India presents the selected groups of its army-personnel all the three wings the Artillery, the Navy and the Air Force who march in an elegant manner presenting a salute to the President of India and the Chief Guest who have a special pedestal put up as the central stage of the show. All the V.I.P. and V.V.I.P. guests are seated on both sides of this pedestal. There are contingents of the army cavalry; the Camel brigade which also presents a salute in a disciplined formation. Then there are the tabulaes presented by the different government departments high lighting their achievements and the different states present special features of their local culture and ways of life. In this way, India as a unity even in diversity is amply demonstrated and presented. The children selected from different educational institutions put up cultural shows on the Rajpath and thus goes on the marvelous and worth-seeing spectacle for nearly three hours. The most elegant part of the show is the tabulaes presented by the three wings — of the army, who put up the latest achievements and acquisitions of the army in the most modern and up to date weaponry which gives to the world at large a show of our strength as a nation prepared for any contingency and emergency if ever our national integrity is challenged. This is the only day on which it is done and the public of the country, the viewers on the T.V. screen are given a feel how strong our national defense is.

While on one hand we are shown our strength on the other hand on this day, during the show the highest military awards for outstanding gallantry are also presented. It is a touching sight when the widow of a soldier who gave up his life fighting for the country, comes up to receive the gallantry award on behalf of her late husband. Even children who get selected over the length and breadth of the country for exemplary courage are also rewarded and honored.

It adds glory and glamour to this grand spectacle when the airforce of the country presents marvelous and miraculous feats of aircraft maneuverings and formations. Even they shower rose petals over the Chief Guests and the spectators which receive a spontaneous cheering.

The whole show comes to a close with the national Anthem — our Jana Gana Mana. Year after year January 26 is eagerly and keenly awaited for this celebration in the capital of the country — New Delhi and the Rajpath turns really into the Rajpath, particularly on this day.

Below we have given a short essay on Republic Day is for Classes 1, 2, 3, 4, 5, and 6. This short essay on the topic is suitable for students of class 6 and below.

The Day’s show begins with the Prime Minister of the country offering his, and on behalf of the whole nation, a homage to the Amar Jawan Jyoti at the India Gate — this is the first item of the event and everything follows thereafter.

Let us salute our great martyrs first who gave up their lives that the nation may live on. Amar Jawan Jyoti is that symbolic. We are a Republic worthy of celebrating the Republic Day only on their account. 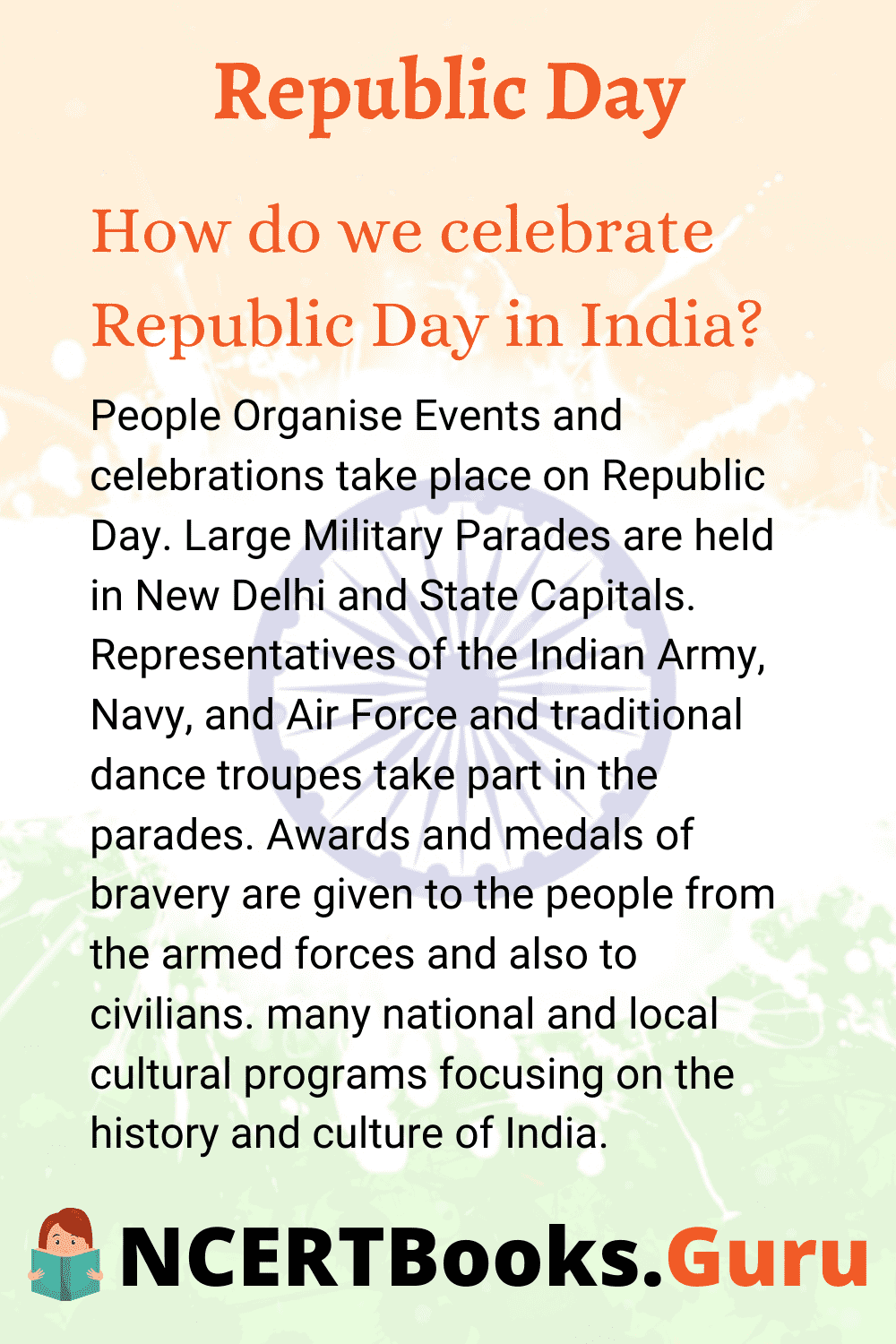 1.  What is Republic Day and why is it celebrated?

Republic Day is a day to remember when India’s constitution came into force on January 26, 1950, completing the country’s transition toward becoming an independent republic.

2. When is Republic Day Celebrated?

Republic is Celebrated on 26th January each year right from 1950 after the Indian Constitution Came into force.

3. What is the significance of Indian Republic Day?

Republic Day honors the date on which the Constitution of India came into effect on 26 January 1950 replacing the Government of India Act (1935) as the governing document India.

4. How do we celebrate Republic Day in India?

People Organise Events and celebrations take place on Republic Day. Large Military Parades are held in New Delhi and State Capitals. Representatives of the Indian Army, Navy, and Air Force and traditional dance troupes take part in the parades. Awards and medals of bravery are given to the people from the armed forces and also to civilians. many national and local cultural programs focusing on the history and culture of India.