Relevance of Gandhian Principles in Today’s World Essay: Human society is fast changing. With rapid developments in scientific knowledge and wider information at our disposal, the quality of life for every individual is expected to get better. Sadly, we still struggle with innumerable problems at social, economical, cultural, and political levels. As the global efforts struggle to achieve the Millennium Development Goals, India has a single point of reference to solve its plethora of problems – the father of our Nation. 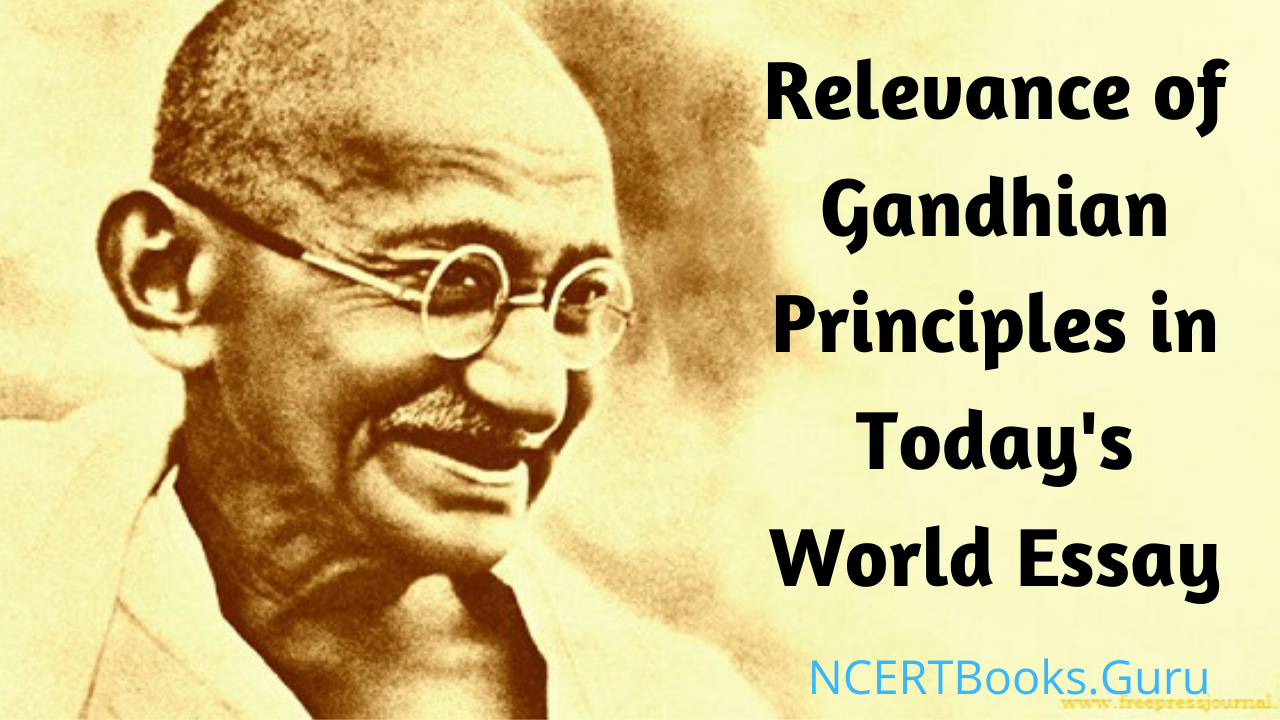 Below we have given a long essay on the Relevance of Gandhian Principles in Today’s World of 500 words is helpful for classes 7, 8, 9, and 10 and Competitive Exam Aspirants. This long essay on the topic is suitable for students of class 7 to class 10, and also for competitive exam aspirants.

Even as years roll by, the Gandhian principles remain evergreen and hold power to enlighten the entire world. His simple life, rich values, and enriching wisdom made him uproot the mighty British Empire. On pillars of truth and non-violence, he offers solutions, through his different principles, on issues of society, economy, politics, and human substance.

An eye for an eye makes the whole world blind: Gandhiji built his movement of Satyagraha on value premises of truth and non-violence. These proved to be the biggest arsenal to annihilate the empire. The use of brutal force on peaceful and unrelenting non-violent masses exposed the brutality and insensitivity of Britishers. The methodology appealed to the conscience. It is based on the assumption of the basic goodness of humanity.

In a nuclear-armed world of tanks and missiles, the relevance of these values can still not be questioned. They still form the tenants of Indian foreign policy and ‘ their reflection is found in our “no-first-use” clause in the nuclear arena. India believes in remaining prepared as the security challenges accumulate, but aggression fails to find support in our strategies in global interactions. Even on a personal level, being truthful is the most satisfying experience for a conscience-driven person and also ends up as most rewarding in the long run. ‘Satyamev Jayate’ was vindicated when tricolor unfurled in 1947 and brought a new dawn for the nation.

Gandhian Satyagraha proved effective not only due to ideology but also due to their timings. Gandhiji had a knack of sensing the mood of the nation. This connection to the masses emerged from his genuine concern to the pain of every individual – labor, farmer, worker, and students. In present-day society, apathy has become the biggest curse. We are losing sensitivity for fellow human beings by enveloping ourselves in tight schedules and work pressures.

This sensitivity in Gandhian philosophy for all living creatures. On his farms, he would himself attend to injured sheep or goat, even while busy with larger national issues. Humanity can offer no excuses for waiting. The world community must learn this simple Gandhian lesson to fight multiple problems of society. With little efforts and sympathy, we can improve the lives of animals and people around us, by understanding the “peer parai” and rising to the occasion. His successful mass-movements soon elevated him as the most followed mass-leader. In spite of his popularity, he remained grounded. ‘Simple living and high thinking’ was the adage he lived by, undertaking rigorous fasts and largely depending on fruits and nuts; he exemplified the way of living in harmony with nature. He believed in mother earth’s capacity but cautioned, “Earth has enough for everyone’s needs, but not for their greed.’

As human society faces limits from a depleting quality and quantity of resources, ‘sustainable development’ has become the key mantra for rectifying our deeds. At the core of this concept is the Gandhian philosophy of ‘needs-based’ approach. The contemporary problems of food security with depleting soil quality and conservation of biodiversity could have been avoided had we followed the wisdom of Mahatma.

As a leader, Gandhiji respected everyone’s views but made firm decisions based on his vision. He advocated the basic philosophy of “Be the change that you want to see”, which continues to guide the present-day civil society. His message underlines a simple philosophy of valuing every individual and his efforts. This is where the global discourse of development has failed miserably. By advocating homogeneous prescriptions for growth and implanting models irrespective of ecological diversities, problems in every society have increased manifold.

Sanitation, security, literacy, or infrastructural development – all demand utilization of indigenous wisdom and traditional homegrown solutions. Gandhiji valued the wisdom at grassroots and encouraged the empowerment of the weakest. His idea of’village republics’ grows from this belief of cultivating self-sufficient villages through democratic decentralization.

Though Gandhian idea has been given shape in the form of institutionalized Panchayati Raj Institutions, they still lack vibrancy. Only political will and informed citizens can make the Panchayati Raj, a successful model to bring development and provide solutions to disabilities of the rural masses. Though fast urbanizing, it is the growth of rural India which still defines the growth of our nation.

The Indian growth story is also marked by huge disparities, which are further accentuated by casteism and communalism, rearing along with the hatred and divisiveness. Gandhiji had stuck at the very base of this divisive phenomenon by defining it by its genesis. He defended the castes, as a means to bring about the division of labor and thereby efficiency in the society. It is our attitude of not honoring and respecting every work that accentuated the divisions to levels of untouchability.

Caste divisions have grown over time and have grown over time and have assumed virulent forms with ‘honor killings’ and ‘mass-murders’, forgetting the noble genesis explained by Mahatma. Eshwar – Allah tero naam Sabko sanmati de Bhagwan: The favorite bhajan of Mahatma unfolds yet another simple wisdom which he believed in. A strong rotary of Hindu-Muslim Unity, his idea of secularism was built on respect for everyone’s individual choice. The communal riots, which occasionally rear their head to disturb the fabric of society, only grow on ignorance and parochial issues.

Gandhiji is all the more relevant today when the problems in the society have assumed larger dimensions. In his stress on ‘Charkha-Khadi’ lay the simple strength of promoting indigenous industries and skills. In a globalized world, as we improve our intensity of trade, a large segment of our population continues to struggle with poverty and unemployment

The promotion of vocational skills and converting them into self-employment means is the sustainable means of driving out people from the grasp of poverty. The spirit of ‘swadeshi’ should be re-ignited whereby it can coexist with the challenges from multinational firms. With the help of microfinance, more clusters of indigenous items should be promoted as small and cottage industries. Along with employment opportunities in villages, factories should imbibe the ‘trusteeship’ concept of Gandhiji by ensuring proper social security for employees. Their growing role in societal concerns should inspire them to take up causes and fulfill their corporate social responsibilities.

As every segment of the society marches forth to build an inclusive India, the contribution by women should show widening possibilities. With the women’s reservation bill becoming a reality, a significant step towards empowering the women has been taken. The effects should percolate to grassroots by ensuring education for the girl child. The Gandhian principle of education gave prime importance to the girl-child, as an educated girl spreads the affectivity of her education in multiple ways.

The simple life of the Mahatma advocates principles, each of which is heavy with profound wisdom. They may appear trivial and unpractical but our deviations from these basic values have been the root cause of many of our maladies. It is essential we bring back Gandhigiri in each of our fives. It will only require us to re-look and search for that basic inherent human goodness which had got buried deep down somewhere within all of us. The desire to see quick results and lack of patience due to time constraints of fast-paced fives may be hurdles in evaluating these principles. But, the sustainable solution that they offer is enriching and satisfying. Similarly, even at the policy level, a re-look at basic Gandhian philosophies may re-orient our efforts to bring inclusive growth and happiness to the faces of millions.

10 Lines on Relevance of Gandhian Principles in Today’s World FAQs on Relevance of Gandhian Principles in Today’s World

1.  Are the principles of Mahatma Gandhi valid today?

Principles of Mahatma Gandhi are valid and eternal. Not all the principles are valid today but many of them are still followed and valued by most of the people.

2. What do you mean by Gandhian principles?

Gandhism is a body of ideas that describes the inspiration, vision, and the life work of Mohandas Gandhi.

3. What are Gandhian values?

The Gandhian idea of trusteeship holds relevance in the current scenario as people live a lavish lifestyle and destroy the resources recklessly indebting future generations.