The river Krishna originates from the Western Ghats and empties into the Bay of Bengal. In terms of water inflows and river basin, Krishna is the fourth biggest river after Ganga, Godavari and Brahmaputra. Krishna river is one of the essential sources of irrigation for many southern states.

One of the longest rivers in India, the Krishna river is around 1300km long. It originates near Mahabaleshwar in the western ghats in the state of Maharashtra. Most of the area under the Krishna basin is arable due to the presence of Krishna river. It provides water for irrigation to states like Maharashtra, Karnataka, Andhra Pradesh and Telangana.

The Krishna river originating from Maharashtra flows through Karnataka before entering Telangana state and finally emptying into the Bay of Bengal at Koduru in Andhra Pradesh. The river delta of the Krishna river is one of the most fertile regions in the country. The flow of the river is highly fluctuating as it is dependent upon the seasonal monsoon rains.

The river passes through four states and witnesses cultural and religious diversity. The river is worshipped in the state of Maharashtra among others and is lined with ghats on its banks. The river is named after Lord Krishna who is worshipped all over the country. The Krishna river basin rich in cultural heritage, flora and fauna is roughly triangular in shape.

A weir at Vijayawada district controls the flow of the river. The major tributaries of the river are Bhima(north) and Tungabhadra(south). The other branches of river Krishna are given below:

Vijayawada district, the largest city on the river, controls its flow of water into a system of canals that is further used for irrigation purposes. A number of hydroelectric plants are also situated on the river which harnesses its energy potential.

The river also has cultural importance and is revered as sacred by Hindus. It is believed that all the sins committed can be removed by taking a bath in the river. It attracts people for its Krishna Pushkaram fair, which takes place after twelve years.

The river bears the name of Lord Krishna- the beloved lord who is worshipped all around the country. A common saying in Marathi which translates into “quiet and slow flows Krishna” is ironic to the mighty Krishna river.

States like Maharashtra, Karnataka, Telangana and Andhra Pradesh are blessed to have the Krishna river which provides water for irrigation. Especially in the case of Maharashtra, the river Krishna has a rich cultural and religious significance. It is due to river Krishna that agriculture and economy thrive in the districts of Satara, Sangli and Kolhapur.

The river Krishna is an eastern flowing peninsular river and is the fourth largest river in India. The river basin formed is triangular in shape and receives most of its rainfall during the south-west monsoon. The riverbank is lined with ghats along the stretch of the river. It was beloved that Lord Rama and Goddess Sita once inhabited it during their fourteen years of exile.

The river Krishna originates from the heights of western ghats near Mahabaleshwar and flows majorly through the state of Maharashtra. It then moves into Karnataka before entering the state of Telangana from where it moves towards Andhra Pradesh. Lastly, the river empties herself into the Bay of Bengal.

The river Krishna is a southern flowing river, but it does make a move towards north for a very short period, and the region is thus called “Uttar Vahini” which translates into Northern flow. The flow of the mighty river Krishna fluctuates due to seasonal monsoon rains when its flow becomes both fast and furious.

With the presence of dams in the river, specific issues also arise in the Krishna Basin. The backwater effect which causes flood in the upper Krishna basin system because of the presence of the Almatti dam has been a critical issue. Also, the Koyna dam is said to induce seismic activity in the entire area and is a unique place to study the relation of reservoir induced earthquakes and the correlation between dams and earthquakes.

The Krishna river is approximately 1300km long and has several tributaries. The largest branch Tungabhadra runs for about 531 km long. The river Bhima is the longest tributary with a total length of around 861 km. This makes the Krishna River the fourth largest river in the country in terms of water inflow and river basin after Ganga, Godavari and Brahmaputra.

The Krishna river has a mighty flow which is fed by the seasonal rains during monsoon. It provides water for irrigation to the states of Maharashtra, Karnataka, Telangana and Andhra Pradesh. The river system has a rich cultural heritage.

The districts of Satara, Sangli and Kolhapur are sugarcane producing districts. Sugarcane is a water-intensive crop, and the production has doubled in the last decade, putting heavy stress on the river Krishna. Also, effluents from sugarcane mills and refineries release their effluents into the river further polluting the water.

The issue of deteriorating water quality of Krishna river is identified by the Central pollution control board and prioritizes restoration of the river Krishna and its tributaries. Discharge of highly alkaline water from the power stations increases the alkalinity of the water, which is already highly alkaline due to the presence of basalt rock formations in the basin.

The river has several dams and hydroelectric power project plants on it which harness the potential energy of the river. The presence of wildlife sanctuaries also helps in preserving flora and fauna in the Krishna basin system. A few famous sanctuaries and reserves include Nagarjuna Sagar-Srisailam tiger reserve and Krishna Wildlife sanctuary which is home to a number of migratory birds.

The river basin also has rich mineral deposits of coal, oil, limestone, gold, uranium, diamond etc. in the deposits of Krishna Godavari Basin, Nalgonda, Kudremukh, Donimalai and Yellur. The seasonal rains feed the river during monsoon which increases the level and flow of the mighty Krishna river. The river witnesses an outstanding cultural and religious significance with diversity in language, lifestyle and food.

The mighty river Krishna is the fourth-longest river in the country after Ganga, Godavari and Brahmaputra. It flows through four states, namely Maharashtra, Karnataka, Telangana and Andhra Pradesh. The river originating from the heights of Western ghats near Mahabaleshwar empties herself in Bay of Bengal in the state of Andhra Pradesh.

The river Krishna hosts Krishna pushkaram fair which happens after every twelve years. It is believed that anyone who takes a bath in the river Krishna will have all of his sins washed away. The river has cultural and religious significance in the state of Maharashtra, where the river is perceived in a feminine form and is called “Krishna mai” which means Mother Krishna.

The river Krishna provides a lifeline to sugarcane producing districts like Satara, Sangli and Kolhapur. Sugarcane is a water-intensive crop and therefore has led to the drying of the Krishna river. The presence of sugarcane mills, refineries and power stations which release effluents in the river Krishna. It has led to an increase in the alkalinity levels of the water. Also, the river Krishna is no longer able to reach the sea due to degradation and overconsumption. 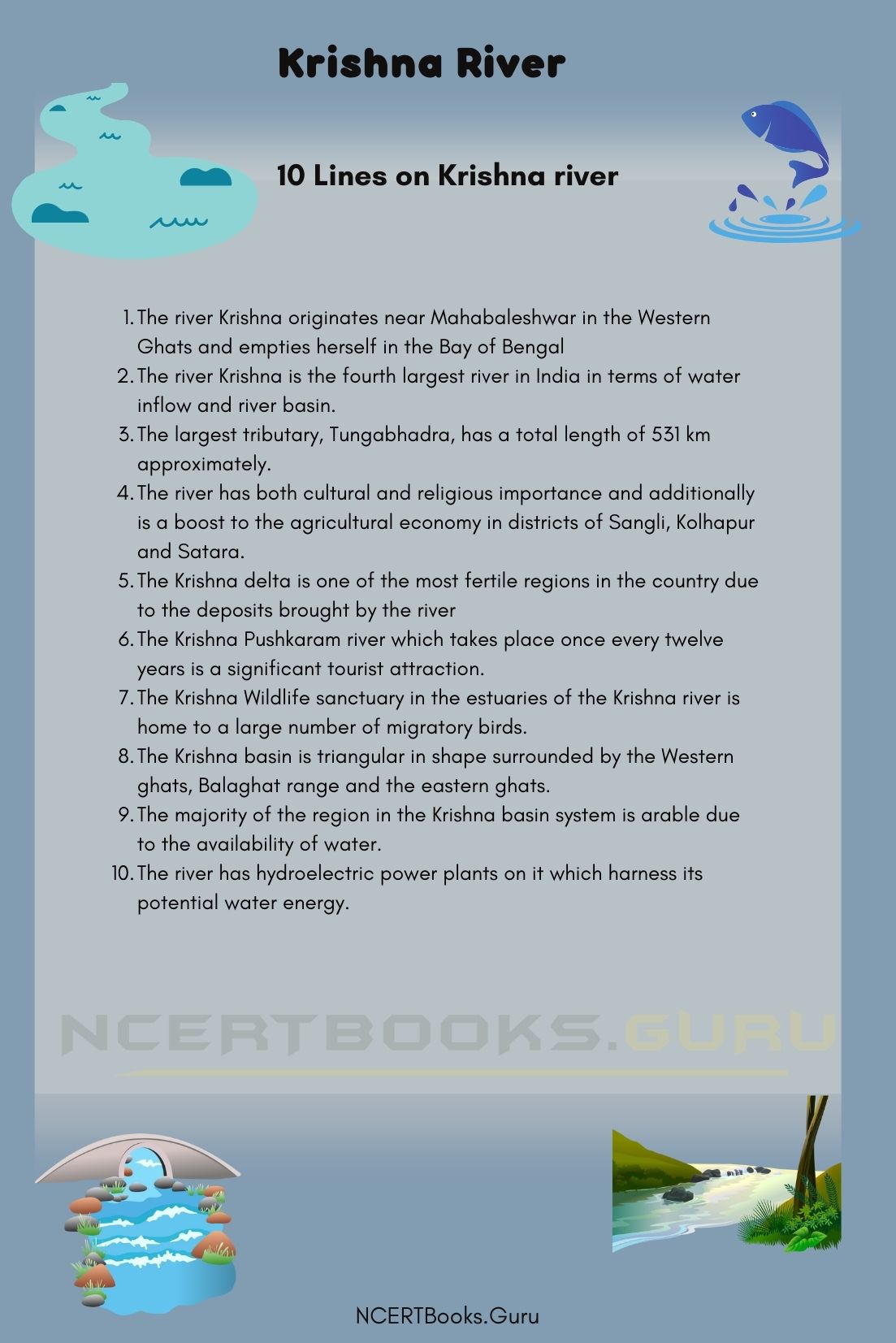 Question 1
Comment on the tributaries of the Krishna river.

Answer:
The river Krishna has a number of Tributaries. In terms of size, Tungabhadra is the largest tributary, and in terms of length, Bhima river is the longest tributary.

Question 2
Explain the importance of Krishna river in the state of Maharashtra.

Answer:
The river Krishna has cultural and religious significance in the state of Maharashtra. The river provides water for irrigation and promotes agricultural economy in the districts of Satara, Sangli and Kolhapur.

Question 3.
What are some of the problems that have arisen in the Krishna river system due to the presence of dams?

Answer:
The presence of Almatti dam causes floods due to the backwater effect in the upper Krishna river basin. Also, the entire region feels seismic activity due to the fact of the Koyna dam in the area, which also helps in the study of the correlation between dams and earthquakes.

Question 4.
Comment on the Cultural heritage of the River Krishna.

Answer:
The river Krishna is named after Lord Krishna. It is lined with ghats throughout its length and is revered as being sacred by Hindus. It was also believed that Lord Rama and Goddess Sita stayed in the region during their exile.