Below we have given a long essay on the Indian Festival of 500 words that is helpful for classes 7, 8, 9, and 10 and Competitive Exam Aspirants. This long essay on the topic is suitable for students of class 7 to class 10, and also for competitive exam aspirants.

Deepawali is one such festival that has a symbolic as well as a rational and recreational value.

The rainy season is at its wane. The slushy drains and lanes are drying up; the humidity and heat of the weather are gradually subsiding and the temperate shiver in the cool breeze begins to give us an indication of the advent of winter. India is the only country where there are marked seasons that keep changing at the appointed time of the year. After the blistering heat of the summers April, May, and June and with the advent of July clouds begin hovering in the sky and the rainy season gives us a much-needed relief.

The parched earth thirsting for a shower gets the much-awaited downpour there is the flooding of rivers and the rivulets, the grass grows green, the trees and bushes wear a washed look. That is the rainy season which gradually subsides to usher the other season the winter in the month of October and November. And it is only so welcome when this refreshing cool shiver of the wintry breeze marks the advent of the festival of Deepawali the festival of the row of lights. This is a festival which comes fifteen days after the Vijay Dashmi. The day of the conquest of Ravana the Demon king by Ram. Hence it has got associated with the celebration of this victory symbolized also as the victory of the Good over the Evil. 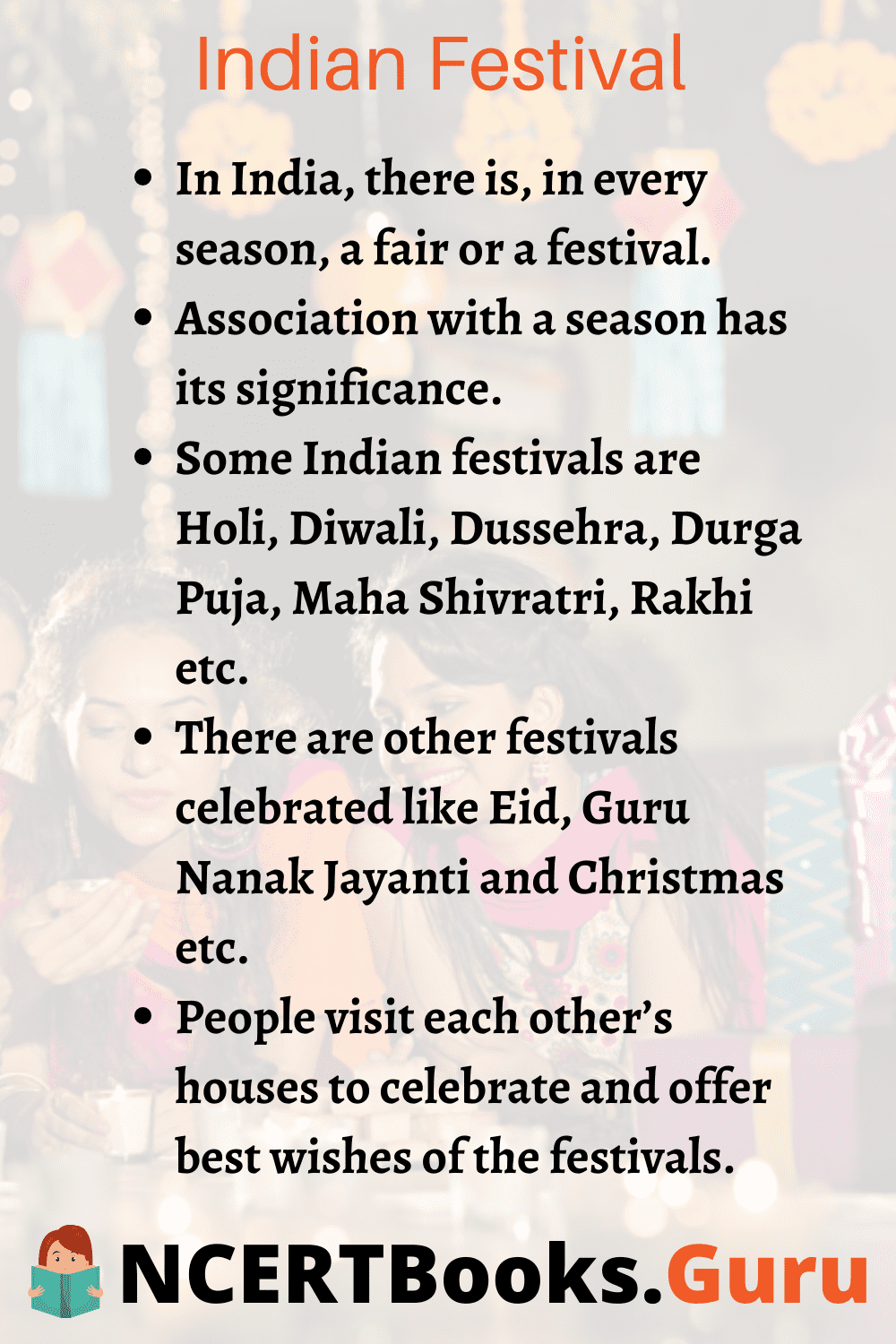 Among all the Indian festivals Deepawali or Diwali as it is commonly called is a festival of great festivity. Prior to the advent of the day of this festival, houses are cleaned; every nook and comer of the house is supposed to be got rid of all the dust and dirt; the walls are whitewashed or painted and floors are washed and t cleaned. It is in this manner that the entire house is disinfected; necessary as it is after the soggy, slushy rainy season which gives rise to insects and germs particularly in the nooks and comers of the house. This is actually an annual cleaning activity of the house and its surroundings; a necessary activity for a healthy living.

Associated as all this is with the celebration of the victory of Ram over Ravana and Ram’s arrival after it to Ayodhya, the ritual and the revelry has its social and hygienic value. That is how every such festival in our country has been so planned to get associated with life and living.

The festival is celebrated by lighting lamps in a row over the housetops; overall the wall tops and parapets of the house. Originally these used to be the earthen lamps filled with mustard oil and a wick dipped in the oil. These while illuminating the houses presenting a festive look also attracted worms and insects which had grown in large numbers during the rainy season and which got self-immolated, in this manner striking a natural balance in the eco-system.

This is a festival when Hindus worship Lord Ganesh the God of Commonweal and Goddess Lakshmi the Goddess of wealth and prosperity. It is actually in this part of the season that the previous crops had been harvested and thrashed and stored and the fresh seeds of a fresh crop are sown in the fields. India has been an agricultural country where crops have ever been the source of wealth and prosperity and of commonwealth. Thus this worship of Lord Ganesh and Goddess Lakshmi has also its very symbolic significance.

This festival got associated with children enjoying the most with lighting the crackers and such other items of illumination and fun. This had sometimes led to bums and accidents of a serious nature and also have caused a lot of environmental pollution. This year, particularly in Delhi, children launched a ‘no-crackers’ drive and this was a very welcome feature of environmental consciousness on their part. They could give up fun and frolick to keep the environment free from pollution really a great move on their part.

If children can be taught lessons in consciousness on social issues in this manner and are inspired and invoked to take up other social issues which besmear our social psyche, India can hope for a brighter day though it may result in a less bright Deepawali for them. Let them learn the lessons of sacrifice for a social cause a great lesson, indeed, to learn.

So, Deepawali the ‘awali’ or row of ‘Deep’ the lamp is a great festival; one of the most festive, one so full of light and glow and at the same time so full of symbolism and so good for the social well being of the people at large. 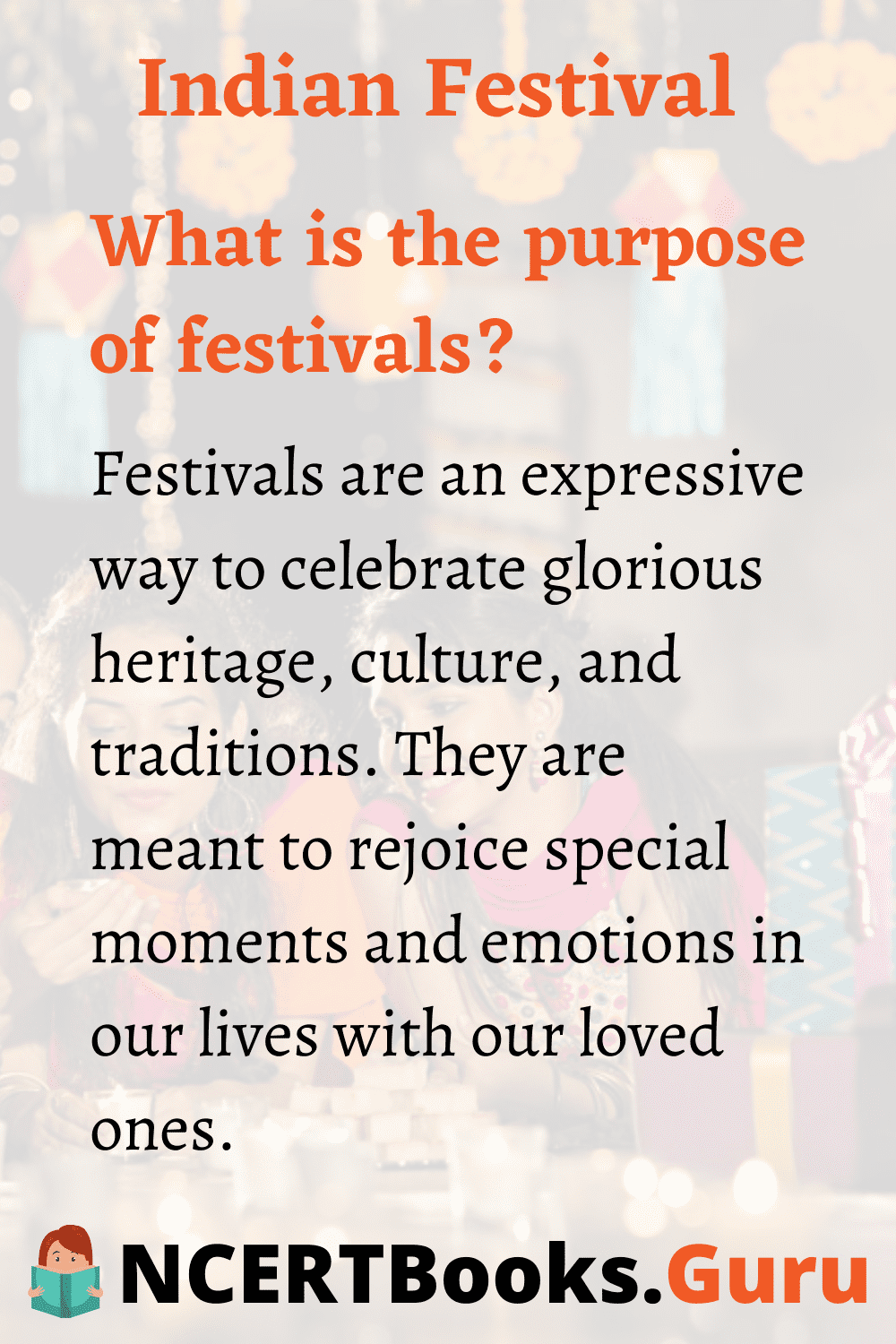 1. What is Festival in simple words?

2. What is the purpose of festivals?

Festivals are an expressive way to celebrate glorious heritage, culture, and traditions. They are meant to rejoice special moments and emotions in our lives with our loved ones.

3. How many types of festivals do we have?

4. Why do we celebrate festivals?

The main reason we celebrate festivals is that the majority of them are more or less religiously centered and thus we come to honor our religions. But festivals also give a sense of enjoyment, relaxation and offer the time needed to bond with family members whom we never really see.