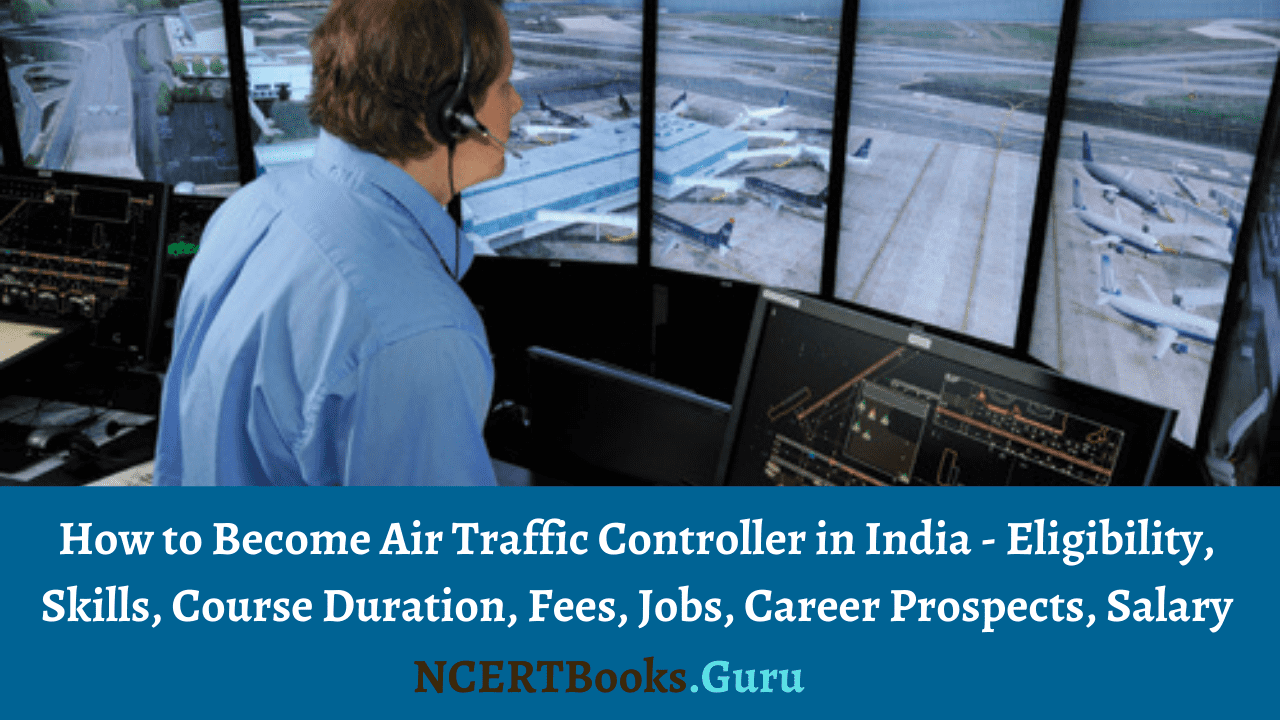 An air traffic controller is a person in charge of managing the flow of air machines in the sky, whether they are fighters, commercial planes, Airbus planes, or other planes. With the globalization of the world and the increased use of airways, the responsibility of ATCs has grown significantly. This job is considered adventurous because they may have the opportunity to fly one of the planes themselves.

This profession not only provides a thrill, but it also allows you to face challenges on a daily basis. To perform his duties efficiently and effectively, he must have special training and knowledge in several areas, including air navigation, interpretation of meteorological reports, operation of sophisticated electronic and mechanical controls, and piloting the aircraft in adverse conditions.

On this page, let us learn everything about how to become an air traffic controller in India, eligibility, salary, and many other things. Read further to find more.

In order to become an air traffic controller in India, one will have to qualify through the following parameters:

To become an Air Traffic Controller in India, one must have an Engineering Degree in Electronics / Telecommunication / Radio Engineering / Electrical or a Master’s Degree in Electronics or any discipline with electronics, telecom, radio physics, as specialization subjects, or a Master’s with physics, math, or computer science with First Class Distinction (60 percent or above).

Contrary to popular belief, becoming an ATC does not necessitate perfect health or perfect vision. General physical fitness, on the other hand, is required. Any disease that could impair normal function must be avoided. One of your eyes must have perfect vision. It is referred to as 6/6 eyesight in general medical terminology. On the other eye, you could have a 6/9 imperfection that must be corrected to 6/6. However, the above-mentioned one or more conditions may vary to some extent depending on state/country.

How to become Air Traffic Controller in India?

To become an Air Traffic Controller, follow the steps outlined below:

Step-1: To become an ATC, one must apply for the civil ATC test administered by the Civil Aviation Authority on a regular basis based on their needs. The written exam consists of four papers, namely,

Step-2:After passing the above preliminary test, the candidate must go through the following tests,

Step-4: After successfully completing the training, candidates are hired as Junior Executives (ATCs) and promoted to Assistant Managers after two years (ATC).

Learn whether a particular course gives you better job opportunities or not by referring to the Course Details page of ours. 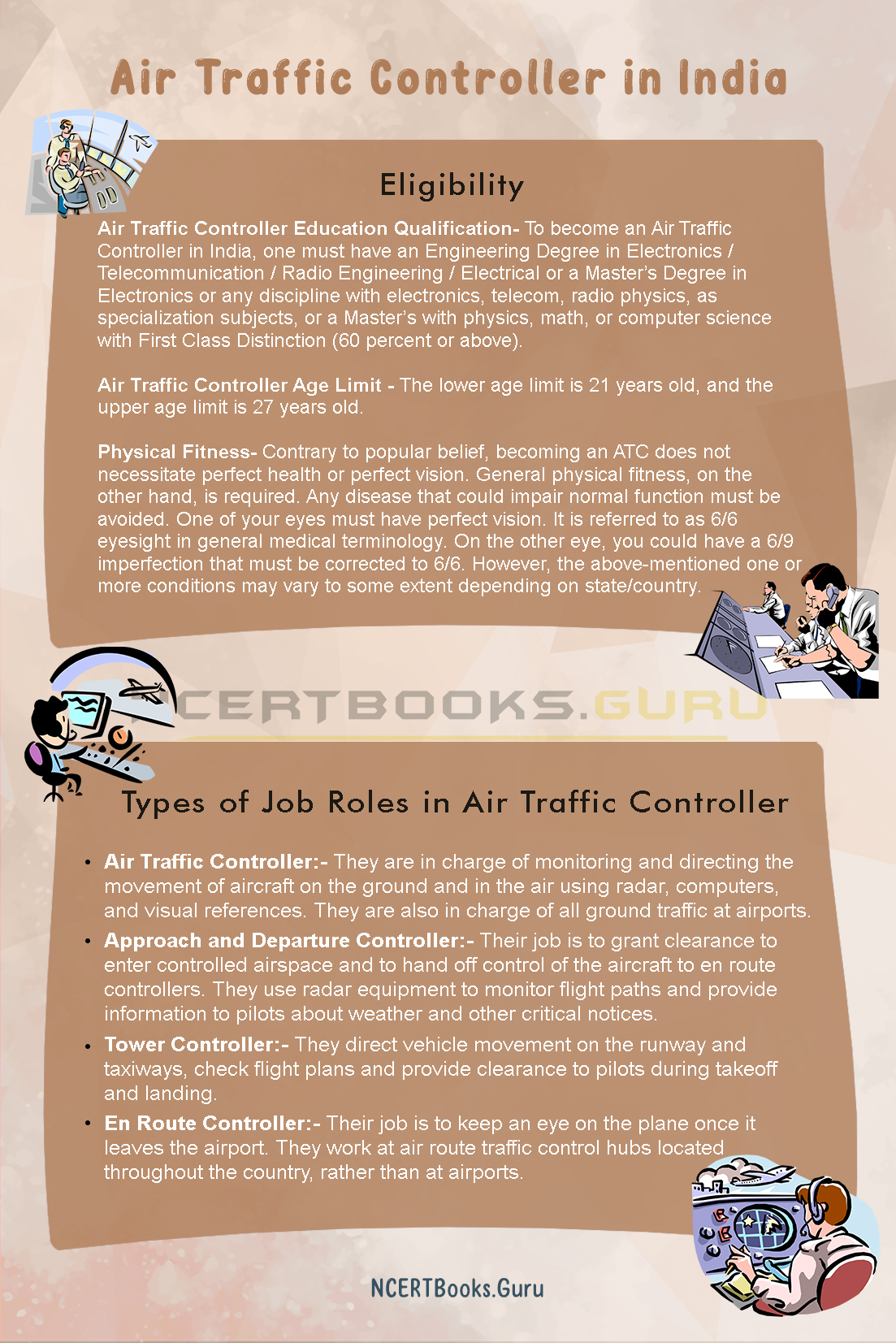 Below are some of the popular employment opportunities for Air Traffic Controllers,

Below are some of the top recruiting companies for Air Traffic Controllers,

Career as an Air Traffic Controller

In terms of the scope of a successful ATC candidate, the Airports Authority of India (AAI) is the sole employer of civil ATCs in India, and training is only provided after hiring. So, if a person successfully completes the training, he or she is guaranteed a job.

Below is the Hierarchy of Air Traffic Controller,

However, apart from India, there are some opportunities with companies such as Hindustan Aeronautical Limited and small private airports. The Indian Air Force also recruits ATC Officers, who are responsible for providing control and advisory services to the Indian Air Force’s pilots. Please keep in mind that the figures above are estimates and may differ from person to person and company to company.

Below are some of the advantages of becoming Air traffic Controller,

FAQs on How to become an Air Traffic Controller in India

1.What are the works constituted for an Air Traffic Controller?
Air Traffic Controllers coordinate aircraft movements in order to maintain safe distances between them. Their job entails managing the movement of planes into and out of the airport’s airspace, directing pilots during takeoff and landing, and keeping an eye on planes flying through the sky for surveillance.

2. What knowledge should an Air Traffic Controller surely have before they start to work?
In order to perform the assigned duties efficiently and effectively, the Air Traffic Controller must have special training and knowledge in several areas, including air navigation, interpretation of meteorological reports, operation of sophisticated electronic and mechanical controls, and piloting the aircraft in adverse conditions.

3. Which entrance exam is conducted for Air Traffic Controller jobs in India?
In order to work as an air traffic controller in India, you must take the Civil ATC Test, which is administered by the Civil Aviation Authority.

5. What are the best places for these professionals to look for work?
They may find lucrative employment opportunities in organizations such as Aviation Industry, Air Force Industry, Armed Forces, Domestic Airports, International Airports, and so on.