The River Ganga, also identified as the Ganges, is a river of stories. The Ganga is as a result of Himalayan snow. It flows 2,700 km from the Himalaya mountains to the Bay of Bengal in northern India and Bangladesh. The river Ganga is considered holy by Hindus, the river is symbolised as the goddess Ganga in ancient texts and art.

The Ganga River flows through northern India and is sacred to those who follow Hinduism. The Ganges River begins in the Himalaya Mountains at Gomukh, the terminus of the Gangotri Glacier. When the ice of this glacier melts, it creates the clear waters of the Bhagirathi River.

As the Bhagirathi River runs down the Himalayas, it meets the Alaknanda River, officially creating the Ganga River. The Ganges River Basin is considered as a portion of a larger river basin including the nearby Brahmaputra and Meghna rivers. It is one of the largest river systems in the world, also identified as the Ganges-Brahmaputra-Meghna (GBM) River Basin.

According to Hindu religion, a very famous king Bhagiratha did ‘Tapasya’ for several years to make the river Ganges, to find forgiveness for his ancestors, who were profaned by a sage. Therefore, Ganges stooped to the earth through the tuft of hair (Jata) of Lord Shiva to make the whole world divine, fertile and wipe out the sins of humans. For Hindus in India, the Ganges is not only a river but a goddess, a mother, a tradition, a culture and much more.

Ganga’s western banks have been fairly well settled throughout history. During the end of the Harappan period, around 1900-1300 BCE, a settlement on the western banks of Ganga extended from the Indus river basin to the yamuna doab. Whereas the eastern banks remain fairly under settled. During the ancient Vedic time, the Indus and the Saraswati River were proffered more spiritual value, not the Ganges. But later the three Vedas conferred much more attention to the Ganges, denoting the variation in religious and cultural beliefs due to the events of that time.

In 1951 a water-sharing conflict ensued between India and East Pakistan (now Bangladesh) after India announced its purpose to build the Farakka Barrage. The primary objective of the barrage, which was formed in 1975, was to avert the water from the Ganges to the Bhagirathi-Hooghly distributary to alter navigability at the Port of Kolkata.

In terms of water flow the Ganga River is the biggest river in the Indian subcontinent. The length of the Ganga is 2,525 km. The origin of the river Ganges is from the Western Himalayan Ranges in the state of Uttarakhand.

The river is honoured and respected as the deity Ganga in Hindu religion. The river also has distinguished historical values. Many colonial and royal capitals like Kannauj, Allahabad, Patliputra, Baharampur, Kara, Murshidabad, and Kolkata are established on the riverbanks of the Ganges. The maximum depth of river Ganga is 100 feet, and the average depth is 52 feet.

The River Ganga is the most prominent river of India. Ganga begins near the gaumukh glacier, at a height of 3900m in the district of uttarkashi in uttarakhand. The important tributaries of Ganga are the Gomati, the Ghaghara, the Ramganga, the Gandak, the Kosi and the Mahanada. The river finally releases into the Bay of Bengal near the Sagar Island.

As ganga flows from the  himalayas to the bay of bengal it traverses 110 km through  Uttarakhand, 1450 km  through Uttar Pradesh , 445 km through Bihar, and 520 km through West Bengal. Ganga is one of the biggest rivers in the world and is certainly the longest in India. It holds several all seasons river rivers both in the southern peninsula and northern regions.

A polluted ganga presents larger existential challenges for both human health and the overall environment. Severely contaminated with industrial contaminants the river provides water to about 40% of the Indian population across 11 states, assisting an approximated population of 500 million people which is higher than any other river around the globe.

In the present time, the Ganges is considered as the fifth-most polluted river in the world. The leading reasons for water pollution in the Ganga river are the disposal of human sewage and animal waste, rising population density, and dumping of industrial waste into the river. Several initiatives have been taken to clean the river but have failed to deliver the desired results.

The Ganges River provides nutrient-rich sediment as it passes, depositing fertile soil beside its shores. This has allowed civilisations to develop and succeed along the waterway for ages. Today, the river passes through well-populated regions of India, contributing freshwater to the millions of people living in these regions.

The Ganga River is also used for irrigation, fishing, and bathing. The largest river delta in the world is formed as a result of Ganga falling into the bay of bengal. Apart from giving drinking water and irrigating fields, the River Ganga is vital to India’s Hindu population for religious reasons as well.

The Ganges River is regarded as the most sacred river and is worshipped as the Goddess Ganga. Hindu Devotees visit the river regularly to offer food and flowers to the River Ganga. They also bathe in the river and drink the water to purge and purify their sins.

The Ganga River is sacred and is worshipped in India as a Goddess in the Hindu religion. The Ganga River is the biggest in the Indian subcontinent. In India, it has the largest river-basin which extends around 8,38,200 sq. km and has three essential courses of flow – upper course, middle course, and lower course. It is a wide river which begins from the Himalayas and falls on the Bay of Bengal.

The tributaries of Ganga are the Yamuna, Ghagra, Alaknanda, Ramganga, Kali, Gomti, Gandak, Kosi and Sone. Padma and Bhagirathi-Hooghly are its two distributaries. The river Ganga is the national river of India. It is the national waterway in India and can be navigated to Haridwar. The plains of Ganga are one of the most prolific plains of India. The Ganges River is an essential resource to Asia, but it suffers many threats.

Human and industrial pollutants permeate the river in some areas, causing it hazardous even for swimming. As the population in regions circling the river increases, water requirements for agriculture increases, racking water levels. Appending further seriousness, scientists have concluded that climate variation has led to a decrease in glacial ice in the Himalayas, the origin of the river Ganga, and speculated this would result in further diminished water levels in the river over time. 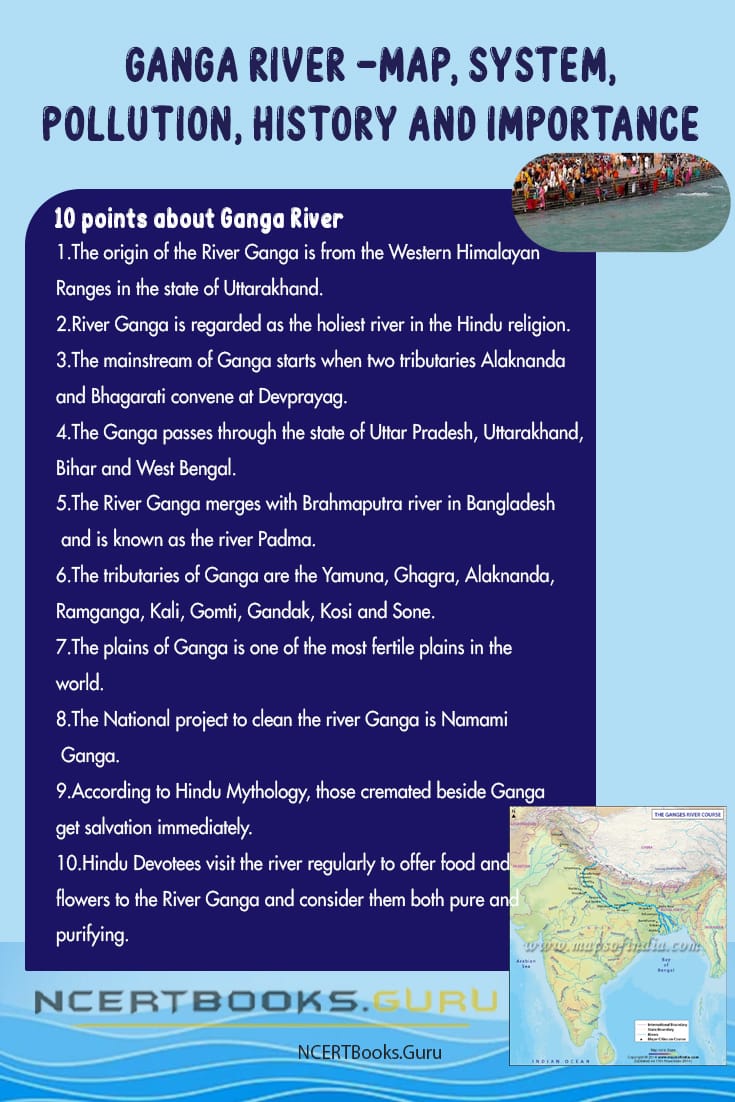 Question 1.
What are the major tributaries of the Ganga river?

Question 2.
Where does River Ganga begin its journey from?

Question 3.
Where does the mainstream of Ganga start from?

Answer:
The mainstream of Ganga starts when two tributaries Alaknanda and Bhagarati convene at Devprayag. As the Bhagirathi River runs down the Himalayas, it connects with the Alaknanda River.

Question 4.
What cultivation can be done near the river banks of Ganga?

Answer:
The major crops near the river banks of Ganga are rice, oilseeds, wheat, potatoes, legumes, chilies, mustard and sugarcane.