Essay on Swami Vivekananda: The Indian philosopher and social reformer, Swami Vivekananda, or Narendra Nath Dutt nicknamed by his mother as ‘Vireshwar’ was born on 12th January, 1863 at 3, Gourmohan Mukherjee Street, in Shinila Pally Calcutta (now Kolkata), West Bengal during the Makar Sankranti festival to Viswanath Dutta and Bhauvanswari Devi. – The Monk Who Inspired the World

Below we have given a long essay on Swami Vivekananda of 500 words is helpful for classes 7, 8, 9 and 10 and Competitive Exam Aspirants. This long essay on the topic is suitable for students of class 7 to class 10, and also for competitive exam aspirants.

He belonged to the Bengali Kayastha caste and had eight siblings. His father was an attorney at Calcutta High Court, while mother was a religious housewife. His grandfather was a Sanskrit and Persian scholar, who renounced the world at the young age of 25 years. Thus, his family background was both radical and spiritual, which shaped his thoughts. Even though he was young, he showed a precocious mind and keen memory. He practiced meditation from a very early age. While at school, he was good at studies, as well as games of rowing and other sports. He also studied instrumental and vocal music. He was a leader among his group of friends.

At an early age, he began to question the validity of superstitious customs and discrimination based on caste and religion. In 1879, Narendra entered the Presidency College, Calcutta for higher studies. After one year, he joined the Scottish Church College, Calcutta and studied Philosophy.

During the course, he studied Western Logic, Western Philosophy and History of European Nations. There started the disturbing questions about God in young Narendra’s mind. This made him associate with Brahmo Samaj, an important socioreligious movement of his time, led by Keshab Chandra Sen. But the Samaj’s congregational prayers and devotional songs could not satisfy Narendra’s zeal to realise God.

He would ask leaders of Brahmo Samaj whether they have seen God. He never got a satisfying answer. It was during this time that professor Hasties of Scottish Church College told him about Sri Ramakrishna of Dakshineswar. Narendra met Ramakrishna for the first time in November 1881. He asked Ramkrishna the same old question, whether he had seen God.

The instantaneous answer from Ramakrishna was, “Yes, I have seen God, just as I see you here, only in a more clear sense”. Narendra was astounded and puzzled. He could feel the man’s words were honest and uttered from depths of experience.

Narendra’s father passed away in 1884 and the family was threatened to be evicted from their ancestral abode. To find solace, he started visiting Ramakrishna frequently.

Though Narendra could not accept Ramakrishna and his visions, he could not neglect him. It had always been in Narendra’s nature to test something thoroughly before he could accept it. He tested Ramakrishna to the maximum, but the master was patient, forgiving, humorous and full of love.

He never asked Narendra to abandon reason, and he faced all of Narendra’s arguments and examinations with infinite patience. In time, Narendra accepted Ramakrishna, and while he accepted, his acceptance was whole-hearted. While Ramakrishna predominantly taught duality and Bhakti to his other disciples, he taught Narendra the Advaita Vedanta, the philosophy of non-dualism.

In 1885, Ramakrishna developed throat cancer. Narendra and other disciples received holy robes and in August 1886 Ramakrishna passed away.

During the course of five years of his training under Ramakrishna, Narendra was transformed from a restless, puzzled, impatient youth to a mature man who was ready to renounce everything, and started living in a dilapidated house in Baranagar. They took alms to satisfy their hunger and Ramakrishna’s richer disciples took care of their other needs. In December 1886, Narendra took formal vows in Antpur and also the name ‘Swami Vivekananda’.

In 1888, Narendra left the monastery to live the life of a ‘Parivrajaka’ (wandering monk). His first place of visit was Varanasi, where he went to places where Buddha and Adishankara preached. While on his way to Haridwar, he met Sharat Chandra Gupta, a station master, who soon became his disciple. Thereafter, he walked till Rishikesh and travelled far and wide.

Some of the notable places were Allahabad in the North, Alwar, Khetri in the Rajputana, Ahmedabad, Kathiawar, Pune in the West and Bengaluru, Mysore in the South. At Kanyakumari, he meditated on the last Indian rock and had a ‘vision of one India.’

Then on, Vivekananda went to Madras and spoke about his plans for India and Hinduism to the young men of Madras. They were impressed by the monk and urged him to go to the United States and represent Hinduism in the World Parliament of Religions. Thus, helped by his friends at Madras, Raja of Ramnad and Maharajas of Mysore and Khetri, Vivekananda set out on his famous journey to the USA where he ‘stole the show’ at the 1893 World Parliament of Religions in Chicago, Illinois. It was here that he earned wild applause for beginning his address with the famous words, “Sisters and Brothers of America”!

After four years of constant touring, lecturing and retreats in the West, he came back to India in the year 1897. On returning to India, he delivered a series of lectures, and this set of lectures known as “Lectures from Colombo to Almora” is considered to have uplifted the morale of the leaders of the ensuring National Movement in India. “Arise, awake and stop not till the goal is reached”, these words by Swami Vivekananda motivated millions of Indians.

He founded the Ramakrishna Mission on 1st May, 1897. Despite ill-health, he once again turned to the West from January 1899 to December 1900. During this time, he established Vedanta Societies in San Fransisco and New York.

He was 39 when he passed away in Mahasamadhi on 4th July, 1902 at Belur Math near Kolkata. Thus, his saying that he won’t live for 40 years, came true. He was cremated on a sandal wood pyre on the banks of Ganges, opposite to where his Guru was cremated, 16 years earlier. 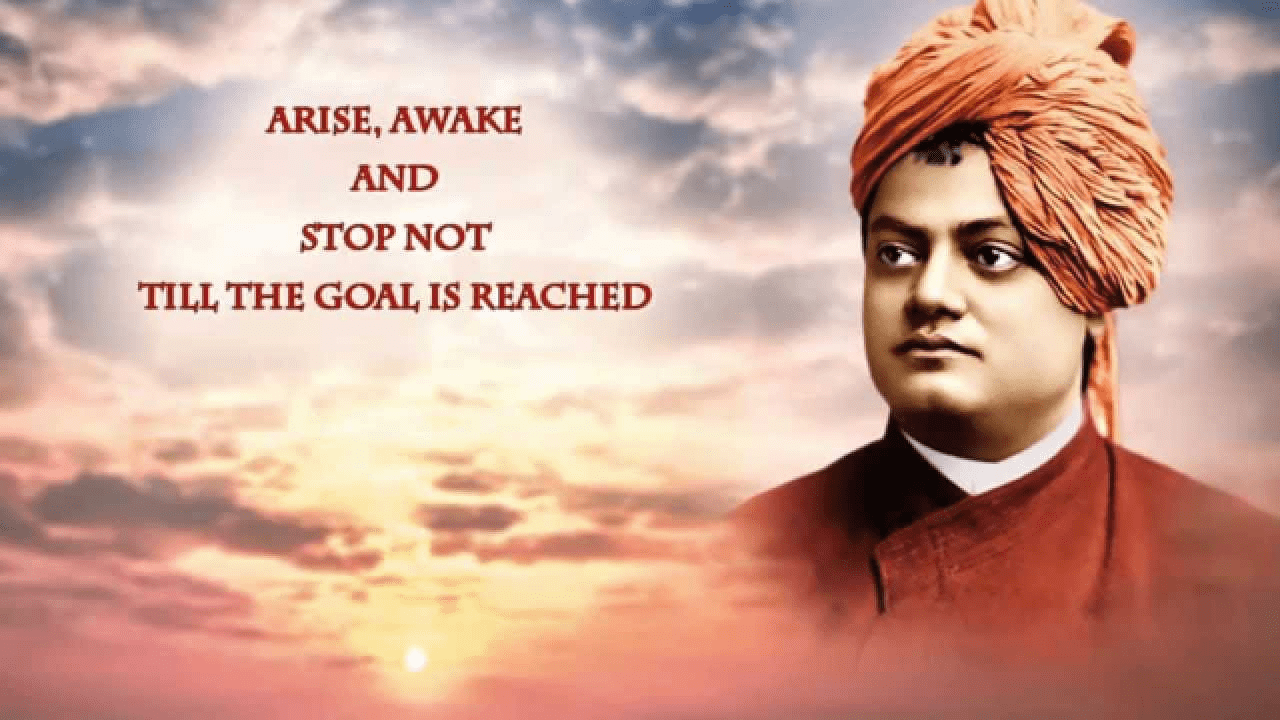 Below we have given a short essay on Swami Vivekananda is for Classes 1, 2, 3, 4, 5 and 6. This short essay on the topic is suitable for students of class 6 and below.

Swami Vivekananda belonged to the branch of Vedanta which held the belief that no one can be truly free until all of us are free. Even the desire for personal salvation has to be given up, and only tireless work for the salvation of others is the true mark of the enlightened person.

He founded Sri Ramakrishna Mission on the principle of Atmano Mokshartham Jagad-hitaya Chah (for one’s own salvation and for the welfare of the world.) Vivekananda advised to be holy, unselfish and have pure faith. He encouraged the practice of Brahmacharya.

His writings inspired a whole generation of freedom fighters in Bengal in particular and in India at large. Most prominent were Subhash Chandra Bose, Aurobindo and countless others.

Many years after his death, Rabindranath Tagore (a prominent member of the Brahmo Samaj) had said:

“If you want to know India, study Vivekananda.
In him everything is positive and nothing negative”.

Another contemporary, Sri Aurobindo, actually considered Swamiji as his mentor. While in Alipore jail, Sri Aurobindo used to be visited by Swami Vivekananda in his meditation. Mahatma Gandhi who, strove and did a lot to bring about reforms in Hinduism himself had once said, “Swami Vivekananda’s writings need no

introduction from anybody. They make their own irresistible appeal”. His influence abroad can be seen in Max Muller and Romain Rolland.

The latter also wrote a book in 1930 on the life of Vivekananda. His birthday is observed as National Youth Day. His 150th birth anniversary in 2013 was celebrated world over. Thus, Swami Vivekananda will continue to symbolise the ideals of the vedantic ways of life, with which India has enlightened the West since ages. He will be a continuous source of inspiration to the youth of his beloved country.