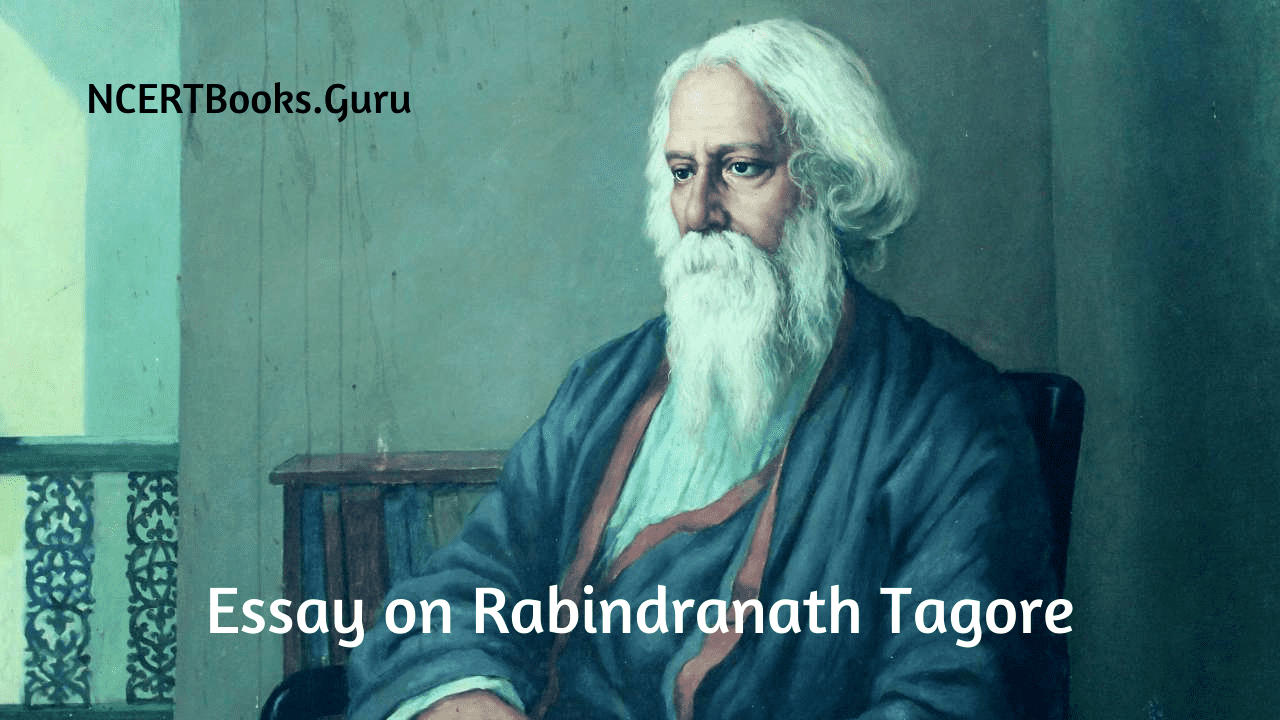 Essay 0n Rabindranath Tagore: After Kalidasa, if India has ever produced a literary genius, then that would undoubtedly be Rabindranath Tagore. Tagore or ‘Gurudev’ as he was called, is recognised the world over as one of the greatest poets and novelists of all times. His artistry, wisdom, experience and profound understanding of human nature is reflected in his writings, be it poems or short stories. He literally wove magic into his work.

Below we have given a long essay on Rabindranath Tagore of 500 words is helpful for classes 7, 8, 9 and 10 and Competitive Exam Aspirants. This long essay on the topic is suitable for students of class 7 to class 10, and also for competitive exam aspirants.

He was born in Kolkata on 7th May, 1861 in a wealthy Brahmin family. He was the youngest of the thirteen children. He had spent most of his childhood with servants, since his mother had passed away when he was very young. His home was the hub of a lot of literary and theatrical activities.

He avoided classroom education. His brother made him swim and indulge in other sporting activities. He learned Drawing Anatomy, Geography, History, Maths, Sanskrit and English. Ironically, English was his least favourite subject. At home, he grew up imbibing the rich discussions held in his father’s study, endlessly. He got the first taste of the Upanishads at home under the guidance of his father. At home, he extensively read the mystical and the Vaishav poets of India.

At the age of 11 years, an ‘upnayan’ ceremony was conducted for him. After that, he and his father embarked on a month long tour. They first visited his father’s estate at Santiniketan, rested in Amritsar for a while and then left for the hill station at Dalhou^je. On the way, he read several biographies. Upon reaching the hill station, they settled in a house amidst forests and waterfalls.

Tagore was smitten by the beauty of the region. They followed a rigorous routine of studies there. In 1877, he returned to Jorosanko and worked on one of his first literary pieces. He finished a long poem in Maithili style. His first short-story in Bengali had the title-‘Bhikharini’ (The Beggar Woman). He was sent to England to study law in 1877 but he returned to India only after a year for his love of writing. After returning, he devoted himself completely to writing. In fact, poetry came to him naturally.

He had published more than 6000 lines of verse before he was 18, along with prose. He became an active member of the Bengal Literary Academy and frequently contributed to many periodicals. He became famous as the ‘Shelley of Bengal’ amidst the intelligentsia of the society. When Rabindranath Tagore made his presence felt in the literary society, Bengal at that time was in the full swing of Renaissance in every field-religion, literature and politics.

The time was ripe for him to reach greater heights and newer horizons. He too was at the prime of his poetic capability and sensibility which bursted into his excellent poetry, drama and novels. His mystic nature, profound piety and deep religiosity earned him the title of ‘Maharishi.’ His ideals culminated in the establishment of Shantiniketan in 1901 near Bolpur in Bengal.

It was modelled on the Gurukul Pattern of education of Ancient India. He hoped to create a peaceful retreat for students where they would flower into young and versatile minds of India. The school became Vishwabharti in 1921.

Rabindranath was writing at a time when the entire country was thrown into the fever of freedom struggle. A sensitive poet like him could not sit in his Ivory Tower.

Therefore, he also plunged with deep passion into the struggle, trying to stir millions with the power of his pen. He wrote a number of patriotic poems, songs and articles especially during the painful partition of Bengal in 1905. Our National Anthem-Jana Gana Mana is the proud creation of Gurudev. In 1909, Gitanjali, a monumental work of the poet, was published. Below we have given a short essay on Rabindranath Tagore is for Classes 1, 2, 3, 4, 5 and 6. This short essay on the topic is suitable for students of class 6 and below.

In 1913, he was awarded the Nobel Prize for literature and the University of Calcutta honoured him with the honorary Doctorate the same year. He was also Knighted by the’ British Government but the Jallianwala Bagh massacre on 13th April, 1919 repulsed the tender heart of the poet. In protest, he returned his knighthood. Tagore has also to his credit a collection of 2230 songs, which he composed. They are known as ‘Rabindrasangit’.

He dabbled in a bit of drawing and painting at the age of 60 years. He died on 7th August, 1941 and not only the entire nation but the whole intellectual community of the world suffered an irreparable loss. The nation lost a great poet, philosopher, social reformer, mystic and a greater human being.

He was not only a representative of the nation, but a wholesome product of Mother Earth, an amalgamation of Indian and modern values. Even though he is not in our midst, his presence can be felt through this works. Like he conveys to the reader in a poem from his book ‘The Gardener’:

In the joy of your heart may you feel the living joy that sang one spring morning, sending its glad voice across a hundred years.