Essay on Policeman: The very name of a policeman evokes some sort of fear. When a child goes on crying or does not go to sleep the mother would say ‘don’t cry’ or ‘Go to sleep soon’ otherwise I would call the police’. The child can stop crying or would close his or her eyes as if going to sleep. This is how the very mention of a policeman can create a sense of fear even among children. If a policeman just comes and knocks at somebody’s doors with his baton, those inside the house, if have got a peep from the window of the man in uniform, would shudder in their nerves as if it is a knock of some danger.

Given below are two essays in English for students and children about the topic of ‘Policeman’ in both long and short form. The first essay is a long essay on the Policeman of 400-500 words. This long essay about Policeman is suitable for students of class 7, 8, 9 and 10, and also for competitive exam aspirants. The second essay is a short essay on policeman of 150-200 words. These are suitable for students and children in class 6 and below.

Below we have given a long essay on Policeman of 500+ words that is helpful for classes 7, 8, 9, and 10 and Competitive Exam Aspirants. This long essay on the topic is suitable for students of class 7 to class 10, and also for competitive exam aspirants.

To the village-folk, a policeman just moving in the lanes of the village would be enough to create a flutter. Why only in the villages, a white-liveried traffic constable on the road crossing is such a symbol of authority. None dare ignores his signals, and if one ever does so even unintentionally or unconsciously, a raised finger of his has to make you stop by the side of the road till he comes to you. How much does the driver of the car, how very highly placed he be, would urge upon the man in uniform how he had inadvertently missed his signal and would be careful in the future? An apology from the driver of the car can let him be off or else one may even have to dole out a good enough amount to let him go. You have to get lighter with your purse really the most unfortunate aspect of our social order. Law should not be purchasable this is what the young citizens of the country must learn, though it is learned the hard way even at the risk of suffering some odds.

So a policeman is one who has been put in a uniform to enforce the law and punish the wrongdoer. If we all do the right actions, behave with others with calm and courtesy, we would hardly ever need the police-action. But that is what does not happen.

Every day just as we open the first page of the newspaper, we get to find news of this crime and that crime; this dacoity or that kidnapping; this bag-snatching or that chain-snatching gangs of auto thieves operating or gangs of highwaymen looting the passenger buses. Even the so-called high ups of the society are found involved in shooting sprees or in murders and kidnappings for money or ransom or revenge.

Below we have given a short essay on Policeman is for Classes 1,2,3,4,5 and 6. This short essay on the topic is suitable for students of class 6 and below.

In such a society where men are not law-abiding but rather are law-breakers, there needs to be some agency to catch the wrongdoers and bring them to book. This is what the policeman does and this is why he has to be there. The wronged must have someone to go to with his complaint or with his tale of woe. He or she goes to the police station to lodge his or her complaint. One does go there in the hope that one would be heard, one’s complaint recorded, investigated into and the wrongdoer would be punished. This does not always happen, that is so unfortunate with our society.

But as long as the citizens keep on suffering crimes, policemen would be needed and it would indeed be a great day for our society if the policeman fulfills his Obligations rightly and does his duty faithfully.

When that would happen a policeman would be treated as a friend and not one to be feared from. The presence of a policeman should create a sense of confidence and security. 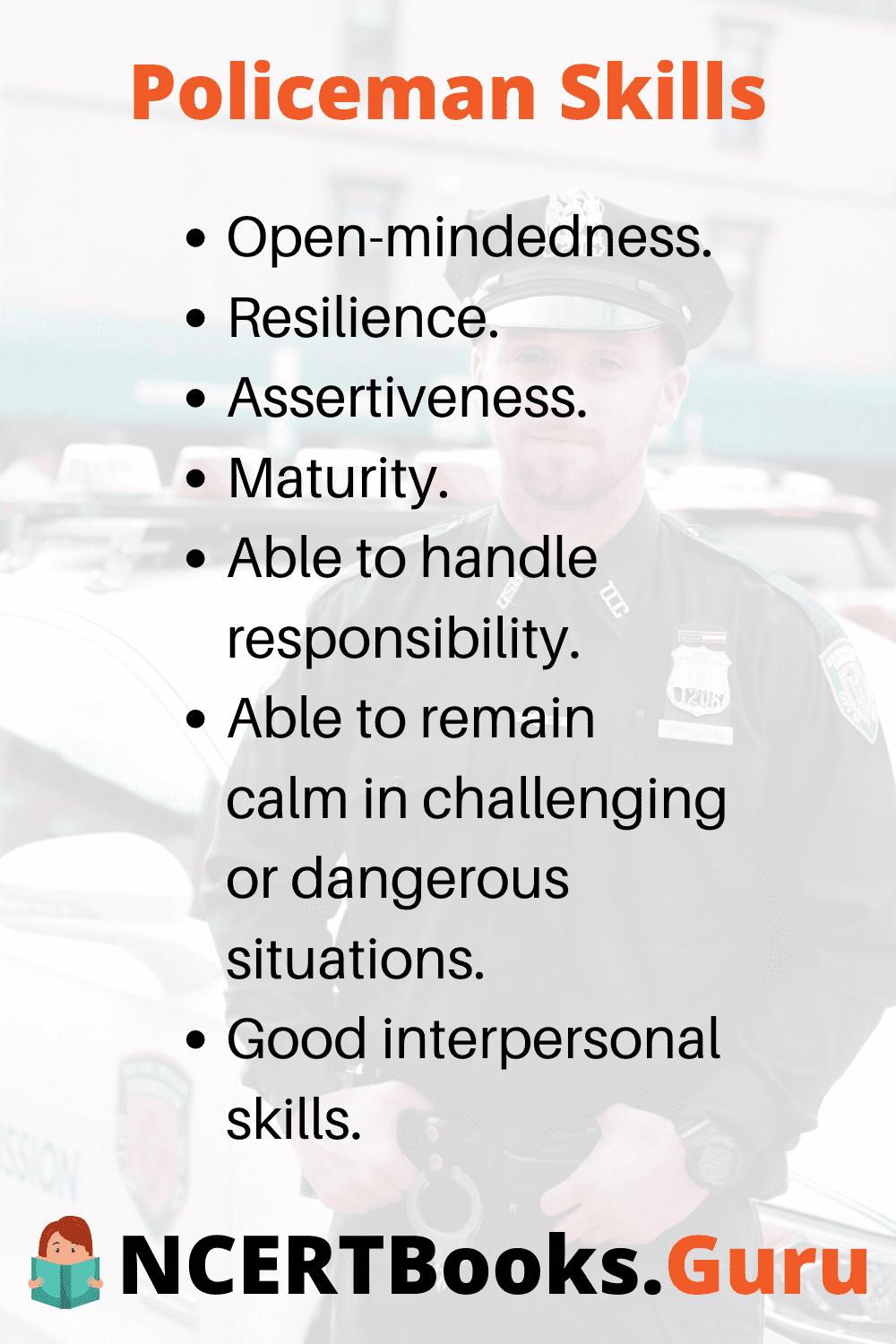 The role of the police is simple. To act as a deterrent to prevent crimes by patrolling. Responding to emergency calls. Investigate crimes, issue summonses, make arrests, and to testify in court.

2. What skills do you need to be a police officer?

3. What is the full form of police?

The full form of POLICE is Public Officer for Legal Investigations and Criminal Emergencies.

4. Which is the highest rank in the police?

The highest authority of any state in the police is DGP (Director General Of Police).