Essay on Mahatma Gandhi: Mahatma Gandhi is considered to be one of the greatest
human beings of the modern times. He is the ‘Father of the Nation’ and people lovingly call him Bapu or Father.

Below we have given a short essay on Mahatma Gandhi is for Classes 1, 2, 3, 4, 5 and 6. This short essay on the topic is suitable for students of class 6 and below.

His full name is Mohandas Karamchand Gandhi. He was born on October 2nd, 1869 in Porbandar, Gujarat. As one of the founders of modern India, he will always be remembered and cherished.

He was an average student in school. Later, he went to England to study law. When he moved to South Africa, he decided to fight for the rights of the Indians there, after experiencing discrimination there. On his return to India, he joined the Indian freedom movement and soon became a very important leader. Then, he started the Non-cooperation and Quit India movements against the British rule in India. For this, he was imprisoned a number of times. He was a great believer in ahimsa or non-violence. He fought hard for the removal of the curse of untouchability. He also did a lot to uplift the weaker sections and improve the lot of women. Finally, due to the untiring efforts of Mahatma Gandhi and other freedom fighters, India attained independence on August 15th, 1947. 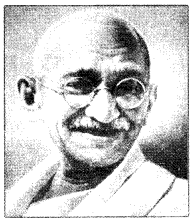 Mahatma Gandhi was a saint politician. His faith in God was firm and deep. He was a great social reformer and believed in the power of truth.

On January 30th, 1948, he was assassinated in Delhi. His samadhi (memorial) at Rajghat is visited by hundreds of people every day. Albert Einstein once said that Mahatma Gandhi was such a great human being that coming generations may not believe that such a man ever existed.

His birthday 2nd October, is commemorated as ‘Gandhi Jayanti’, a national holiday in India, and worldwide as the ‘International Day of Non-violence’.