Essay on India’s Global Leadership: Arise, awake, and stop not till the goal is reached. This clarion call by the visionary saint still shines with relevancy. The form of a challenge may have transformed but the enormity of the task demands a similar sustained display of brilliance. The honesty of spirited efforts by every countryman can weave the social fabric to the richness and quicken our strides towards global leadership. The “tryst with destiny” that began over six decades back has witnessed an eventful journey of this young democracy.

Below mentioned are Long and Short Essays on India’s Global Leadership of 500-600 words and 200-300 words, respectively. The students can refer to these speeches when required and grace the occasion by their words. Read on to find more about Peace and Harmony Essay. 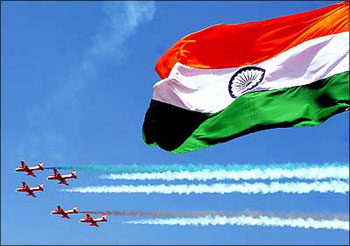 Beset with a unique set of challenges, India tasted its own share of successes and failures and emerged stronger with every it, experience. The British rule held back the flight of this golden bird, which was destined to emerge as a global leader. India failed to assume that role then but comes with a greater sense of responsibility to claim the mantle.

In the era of growing multipolarity, the role of global leadership assumes a surreal bliss. A nation that can inspire confidence across the globe through its values and actions, a nation – which stands tall on strong fundamentals and a nation, with a rich inclusive vision for the planet will only be accepted by the global community at such a position. It is the preparedness of our society which will determine our stake for global leadership.

The need to prepare for global leadership is crucial in this globalized world. Leadership strengthens the voice of the nation at the global platform while advocating its vision and principles. It gives bargaining power, which is inexplicably skewed in the present setting of the United Nations. A crucial element of society preparedness begins with the sense of security, one can provide to the weakest. The minorities in Indian society stand testimony to the efforts of inclusiveness as part of our nation-building. Our constitutional values have been the bedrock to develop a wholesome society from diverse strands of religion, caste, creed, and language.

This would inspire confidence in the global citizen that India would always stand for the weakest and march him to prosperity. The preparedness on the cultural front is beyond comparison. Blessed with unique and diverse skills, India presents myriad dance forms, musical instruments, handicrafts, food items, and skillsets to the global community. The rich Indian tradition has achieved wide global recognition with the knowledge of Vedas finding a global audience.

The strength of any society can be gauged by the status of women in society. India took years to shed its chains of orthodoxy and continues to expand the opportunities for women. The Indian growth story has witnessed an ever-increasing women workforce and their contribution. The wings of freedom have reached the rural thresholds also. Empowerment of women socially, financially, and politically – has transformed the face of Indian villages. Though some inhibition and social stigma remain, the winds of change are blowing for the better.

Education has been the vehicle to deliver empowerment to women. With more girl children finding access to schools, information about opportunities has percolated to the nooks of the nation. Self-help groups have infused a new era of financial independence for millions of women. Informed about their rights, they spread confidence across the globe in India’s vision and leadership. A major landmark in our society’s preparedness came with the Panchayati Raj act. The decentralized framework empowered the grassroots and brought dynamic changes in the face of society.

Let the winds of knowledge blow in from every corner: This ancient wisdom was given a practical manifestation by democratic decentralization. Political empowerment of women and minorities, better utilization of resources, and inclusive planning became a reality. Though discrepancies may have crept in due to insufficient autonomy to these institutions, the aberrations will be creased out in the journey of success.

Only a strong literate society can gauge the global demands and display potential to guide the global community. The education system is continuously reinventing itself to remain relevant and accessible to the masses. Sarva Shiksha Abhiyaan and recent RTE Act can go a long way in building an educated nation with each individual enabled to achieve his potential. More coordination, however, is required between the skill set imparted and demands of the industries providing employment.

Along with institutions of global repute like IITs, IIMs, and AIIMS, India is striving to provide quality education to the large student community through new central universities and engineering/medical/art colleges. The functioning of the largest democracy of the world has been the most livid and exemplary. In a short span of over six decades, India has negotiated the threats and shown resilience to infuse democracy as our biggest strength. The claims for global leadership get strengthened by an acknowledgment of this fact by nations of the world. With increasing political maturity, the society may soon witness the much-required police and electoral reforms, which will further aid in the preparedness of society.

Social preparedness remains hollow until backed by strong foundations of the economy. Having weathered the recent global economic downturn in a relatively unscathed manner, the Indian economy has displayed its strong fundamentals and strength of financial institutions. The better proliferation of bank branches to rural India will further augment the financial inclusion essential to building a global leader. Growth must percolate to the grassroots and yield fruits of development in the form of employment and better living conditions. This has been an arena of concern, though a proactive government intervention may soon clear the logjam.

Social preparedness will remain incomplete until India manages to ensure stability and security for upcoming generations. An evergreen revolution in agriculture is the need of the hour. Food and nutritional security are the sines qua non for a nation to assume global leadership. Still swathes of the nation reels under poverty, malnutrition, and hunger. Focus on increasing productivity, diversification of agricultural products, and timely access to credit for farmers need to be pursued on war footing to strengthen the spine of an aspiring global leader. 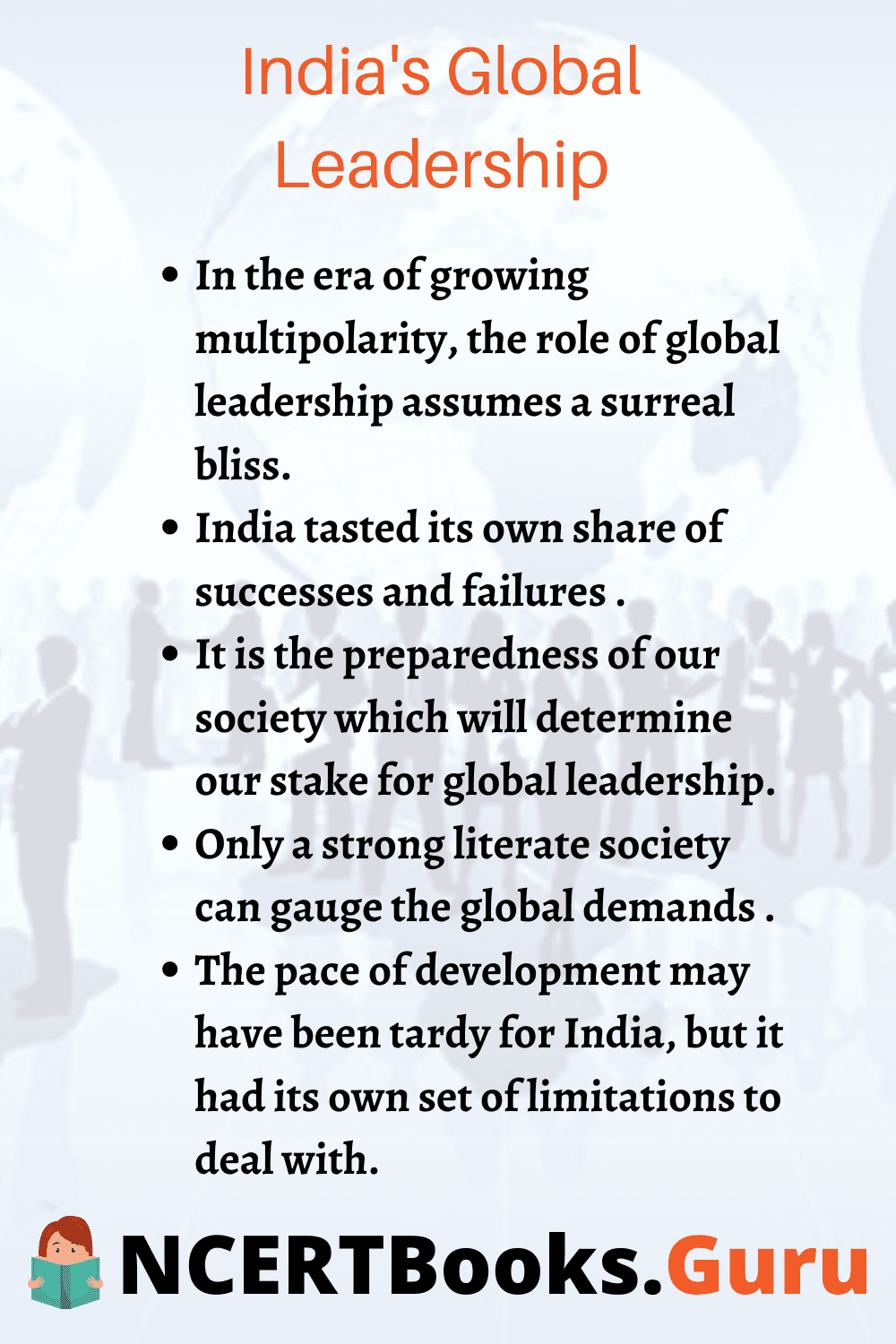 The pace of development may have been tardy for India, but it had its own set of limitations to deal with. Huge population, poverty, extremism, and religious intolerance have raise challenges for the governments of the day. With increasing developmental pace colliding with the rights of tribal communities, a newer set of challenges regarding land acquisition has posed a new conundrum.

A global leader is also expected to display efficiency in tackling its own problems with solutions that inspire generations. Left-wing extremism is plaguing wide domains of nation and insurgency continue to unsettle the tranquillity of northeast. The achievement of the critical balance of judicious use of force and developmental activities will display the soundness of our policies. Balanced and inclusive development of society has to be materialized as a success story. The evolving Indian society has taken positive strides on the right path. The cancerous growth of corruption must be weeded out through legislation and change of mindsets.

The demographic dividend should be molded to channelize the raw energy generated. The journey has left imprints in the form of positive learning, which reinforces the progressive spirit of the nation. It is the strength of our society, which has propelled us as champions of the causes of the developing world. The continuous preparation of society has bolstered our global image. Freedom of press and respect for human rights has been established as Indian democracies shining armors. Our close competitor for global leadership, our neighbor fails to uphold these values based on tolerance and freedom of speech in society.

A Global leader must be able to convince the nations of its vision and direction. Gandhian values of truth and non-violence were demonstrated to be the most potent weapon bringing the downfall of the Raj on the Indian soil. The technical brilliance of our manpower has been globally acknowledged as the nerve center of major multinationals are being powered by Indian grey cells. The solutions advocated by India to major world problems emerge as a result of a pragmatic, balanced, and inclusive approach, thereby appealing to the majority of the globe.

India has long suffered the scourge of terrorism but never initiated a destruction guaranteed approach of violent use of force. We never advocated violence as a solution and though apparently slow, our approach of dialogues and talks is the only means to obtain most sustaining results. India never believed in planting democracies and spoiling our shoes in the process. Rather, we have facilitated nation-building and rehabilitation efforts around the globe.

Our principles of Panchsheel and other foreign policy initiatives have garnered global recognition from time-to-time. Another global catastrophe unfolding in front of our eyes is global warming, for which pragmatic solutions have emerged from India. With an intensive focus on the promotion of green energy, we display our commitments through action-based programs like the green India mission. The emerging multipolarity receives a setback when the military might of nations is put on weighing scales.

The United States of America is miles ahead of the rest of the world on this front. But can this be a ticket to sustain the leadership role? The soft power of India has managed to encompass the world in unparalleled dimensions. Simultaneously, a scientific temper is gaining grounds in the Indian society. With more focus on research and development in the coming years, the potential of rapid scientific advancements is waiting to unfold. Better equipped forces will boost the morale of each citizen of this nation. The arena of energy security is also finding an ecological and innovative approach from the Indian land. With new researches and investments in tapping renewable sources of energy, our society is preparing for a cleaner and greener future.

“Only when waves fall onshore, do we hear a rumbling sound.
Only when leaves shake the woods, do we hear the rustling of the leaves.”

The preparedness of society is a journey, not a mere destination. It is a process which is geared on the energies of individuals. A process that brews on elemental successes and thrives on the spirit of excellence. With an increasingly dynamic and vibrant civil society to steer the boat through the sea of incessant storm, India should have no fear of surmounting the pinnacle. Effective tackling of social evils of society and demands of progressive legislations will help liberate us to a free uninhibited flight of potential. Permeation of education and building of a knowledge society are the stepping stones to create a nation of unlimited opportunities. Consolidating every aspect of the society by gearing them towards perfection and integrating their energies will make the global community sit up, notice and crown an able leader, worthy of being emulated. 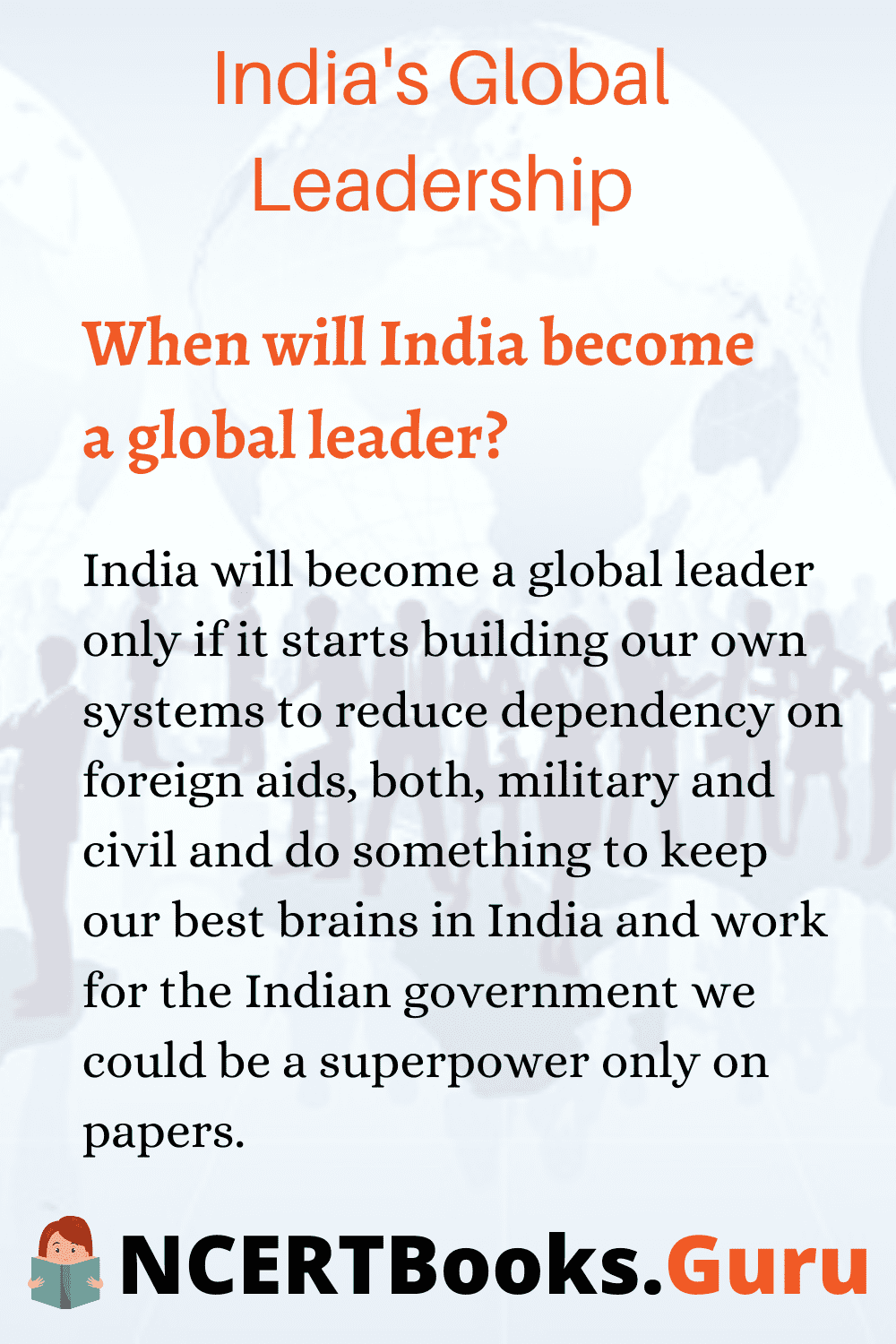 1. What is meant by a Global Leader?

A global leader is one who can a play major role in world affairs, work for maintaining peace and tranquillity and can extend all types of help in preventing global crisis such as climate change, food insecurity, hunger, poverty, etc.

2. When will India become a global leader?

India will become a global leader only if it starts building our own systems to reduce dependency on foreign aids, both, military and civil and do something to keep our best brains in India and work for the Indian government we could be a superpower only on papers.

3. How can India become a prosperous world leader?

To make India a world leader, we need to work on the awareness and generate the need of being a World Leader.