Essay on Annual Function In My School: The year being over, the school arranged the annual function the annual feature of the school. On this occasion, a grand pandal got erected in the school campus with a big dias, with curtains, banners and buntings. On the back curtain behind the dias was a big banner — Annual Function 2002. 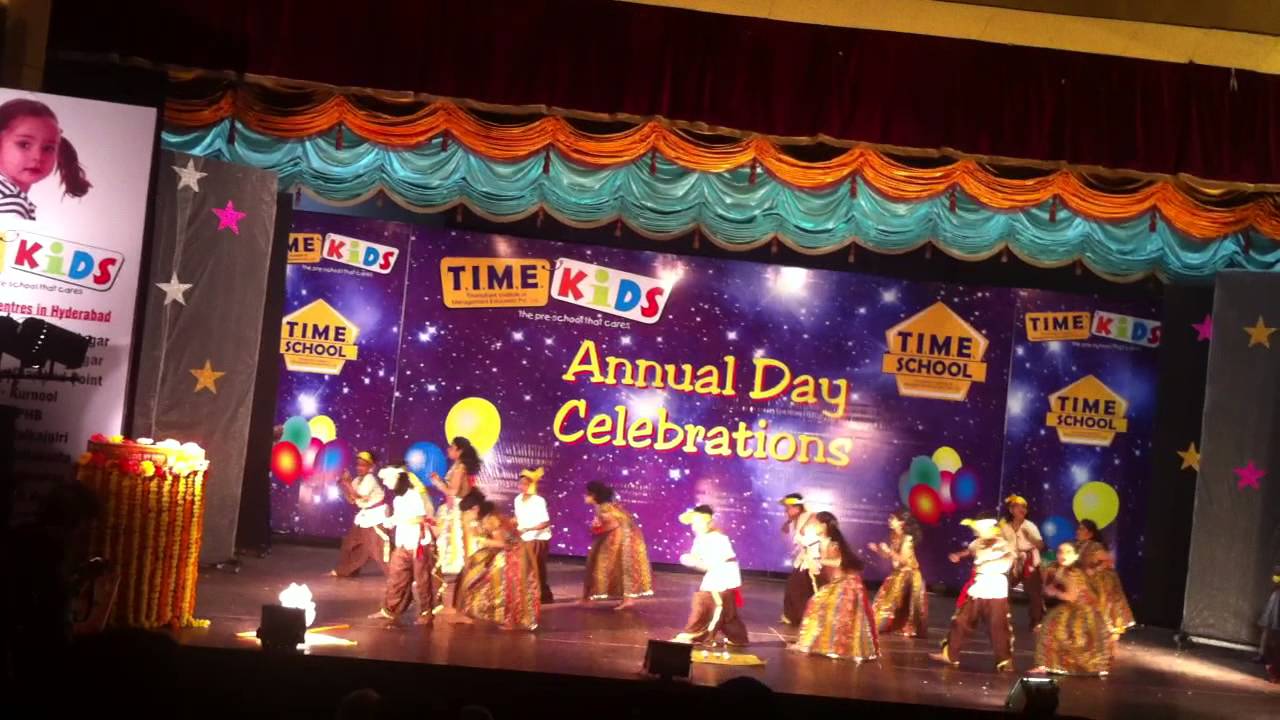 Below we have given a long essay on Annual Function In My School of 500+ words is helpful for classes 7, 8, 9 and 10 and Competitive Exam Aspirants. This long essay on the topic is suitable for students of class 7 to class 10, and also for competitive exam aspirants.

The principal had invited an eminent educationist from the capital town to be the Chief Guest. Teachers were made in charge of the different items of the function assisted by a batch of students. It was at 4 p.m. that the function was to be held. 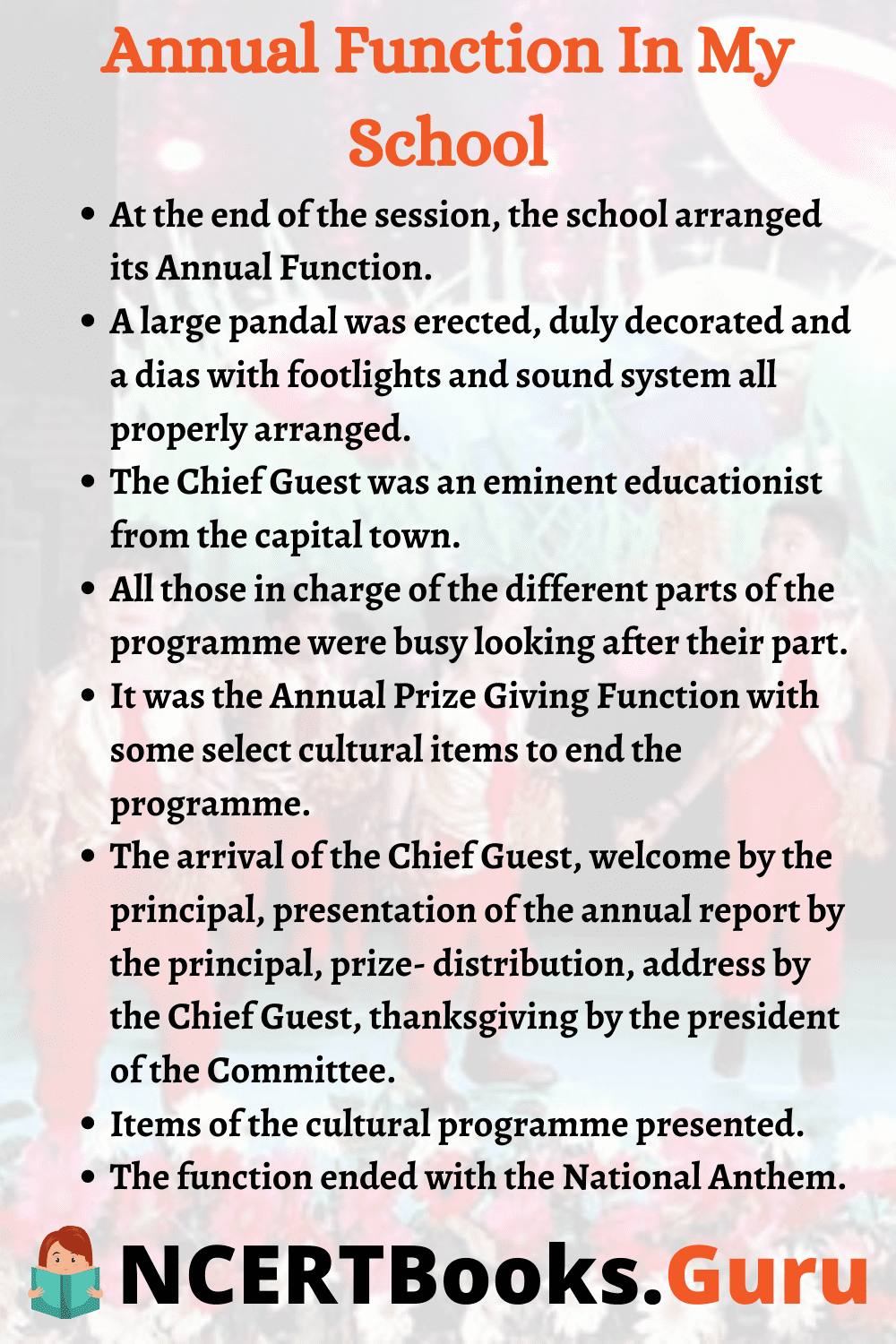 The whole campus and the college building had been cleaned up; the whole pandal was beautifully decorated. Chairs for the guests had been arranged, leaving a passage in between for the Chief Guest to reach the dias. A red carpet was laid over the pathway. Those in charge of the different items of the function had been there since morning, one looking after this, the other looking after that. The teacher in charge of the sound system was, again and again, testing the mike — with a ‘hello’, ‘hello’. The footlights had been arranged and so were the lighting all over within and without the pandal.

The teachers in charge of the ‘At Home’ were busy along with their batch of students laying down the tables the plates cups all in their places.

It was the Prizegiving function to be followed by a few cultural items which were adjudged the best in the last evening show. The Prizes were all arranged on one side of the dias on big tables and the teachers in charge were comparing them with the list and arranging them in order.

Guests began to arrive by 3.30 p.m. Those in charge of receiving the guests were busy directing them to the appropriate section meant for them. Students to receive the prizes were seated in the same order in an enclosure arranged for them.

The principal took the mike and welcomed the Chief Guest and also the other distinguished guests of the evening. He presented a brief report of the school its achievements during the year and plans for the future.

Then the prize-giving function started. The toppers of all the classes were called upon to receive the momentoes. Then a special Gold Medal was presented to the ‘Best Student of the Year’ for all-round achievements.

The student who had topped at the Board’s Examination was worthily awarded a Gold Medal and his parents — father, as well as mother, were also duly honoured. This was loudly clapped and cheered by the whole audience.

Prizes were also awarded for the cultural show, debate, Quiz competition, on the spot painting competition. It was all so encouraging to the participants.

Then we’ve presented some specially selected cultural items — dances and songs which had been adjudged as the best. This was in honour of the Chief Guest in particular.

And then the Chief Guest was requested to say a few words. He eloquently praised the school for its achieve¬ments and congratulated the boys and girls for receiving prizes as also greatly praised the teachers for their efforts and the principal for his guidance. Then he spoke about education and examinations and made some valuable observations and suggestions.

The president of the Committee then thanked the Chief Guest and all those who had honoured the school with their presence.

The function ended with the National Anthem.

The Chief Guest and those who had especially been invited for it, finally joined at the Tea Party in which students who had received the prizes also joined. It was a great day for them a great honour, but they had duly deserved it.
It was late evening. The campus stood duly illuminated and all felt greatly relieved the Annual Function had passed off so successfully. 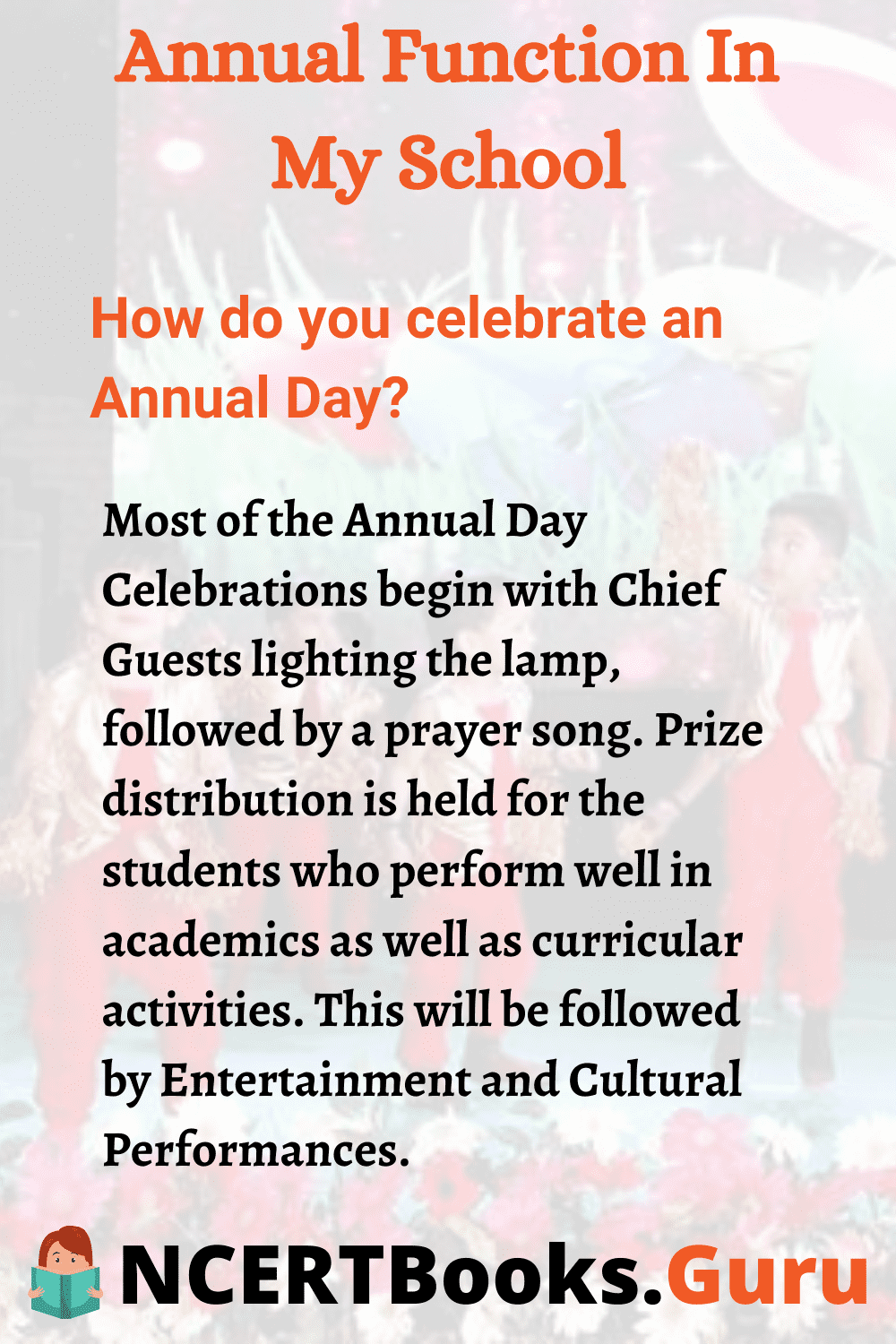 10 Lines on Annual Function In My School

FAQs on Essay on Annual Function in my School

Annual Day or Function is an internal event of the School or College and they have all rights to decide on how to celebrate the event.

2.  What is the importance of Annual Function?

Annual Functions are important as they improve the talent and extracurricular activities of a child.

3. How do you celebrate an Annual Day?

Most of the Annual Day Celebrations begin with Chief Guests lighting the lamp, followed by a prayer song. Prize distribution is held for the students who perform well in academics as well as curricular activities. This will be followed by Entertainment and Cultural Performances.