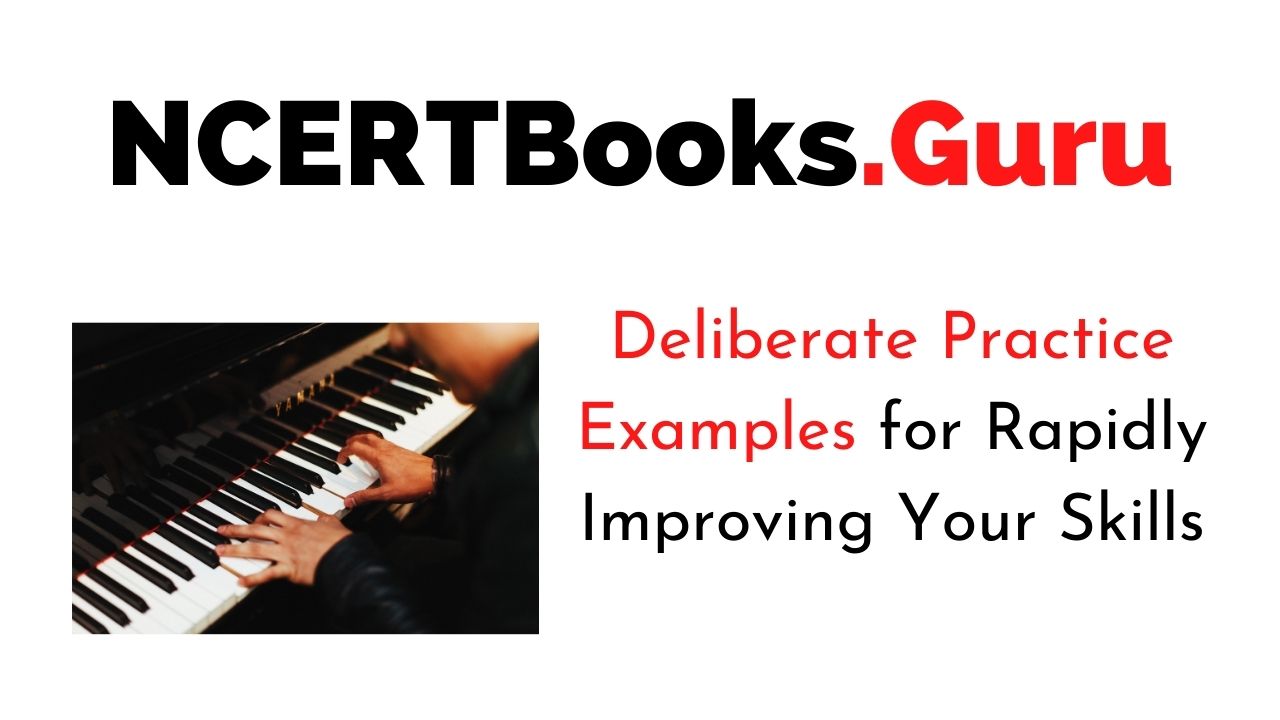 It mainly refers to the practice of improvement in anything. It is a purposeful and systematic practice. Regular exercise includes mindless repetition without any aim, but the deliberate practice requires focus attention on which specific goal.

When we fix a goal on the first day, we are more conscious about every Error, but with time, we either learn better, or that Error becomes our property. The Error can not help you get Our success, so delivering it practising anything will allow us to get something better in practising the same thing repeatedly.

Proper strategy in anything can lead you to get your success. Here are some examples.

Aubrey Daniels has the following strategy. Consider player A and player B. Player B after every shot takes a break and talks to his friends and Player A has a colleague who retrieved the ball after each attempt.

The colleague keeps recording every shot if one shot missed the Record whether the Miss shot was short, long, left, right, and the shooter reviews the Record after every 10 minutes of practice. Both players practising hours are equal and practising time is identical, but player A is with proper strategy and should do more than B.

Magnus Carlsen is one of the highest-rated chess players. Distinguish features of a great player are recognising a chunk that is to know the board’s arrangement by playing computer chess, which helped him play several at once. This strategy enabled him to play faster and to find out his mistakes and to correct his weaknesses.

Josh Waitzkin is a martial artist and won several US national medals and 2004 world championships. In one of the final competitions, an opponent illegally hit his nose, so he lost his control and forgot his strategy. After that, he appointed a partner who fights in this manner, and he practices himself to keep calm and follow his strategy .he wrote Dirty players were my best teacher after that incident.

Jiro Ono is a chef and owner of an award-winning sushi restaurant in Tokyo. Jiro focused on every little thing in making sushi, and he trained his apprentice the same. Ono taught the apprentice about every little thing, such as cutting fish, bringing a towel, using a knife and many more. One of his apprentices trained under his guidance for ten years and allowed him to cook eggs.

In 1970 Anders Ericsson told one of his students to memorise random strings of numbers. In each practice, Ericsson started with five-digit strings loudly, and his student repeated it. If getting it right then, Ericsson goes to 6 digits and so on and after that goes repeatedly with a higher number. If his student got wrong, then Ericsson drops the string’s length by two and goes again repeating this process for the fourth one-hour session his student recites back string 7 to 8 digits.

In the 5th session, he remembers ten-digit and eight-digit strings, and by 60 sessions he can remember 20 string numbers 200 sessions he remembers 82 random digits. The power of deliberate practice makes him able to improve his skill. his student always try to learn from his mistake and pushing self from his limits would result in expanding in the limit

Demigods use a strategy in online games. He noticed that the playtime and skill of the player do not match. Some people played more time than him but not killed at me he always prefers to play against his comfort zone and ever played with the highly skilled player to learn from them rather than people play against an inferior player just for their happiness.

Another strategy followed that he was always interested in most skilled players about what item they buy, where they go on the map and what skill to upgrade. His approach was very organised and used deliberate practice to increase his skills.

The best example of using a deliberate practice for writing came from Benjamin Franklin’s most favourite strategies. He intensely studied a passage in a book and tried to reproduce its content and structure then he compared his passage and content with the original one and identified the difference. Please help him to discover his mistake and to rectify them.

When Franklin realised he was not right in the vocabulary used another technique, he considered a good writing technique and transferred into rhyming verses, and it changed his vocabulary skill. And after that, he took the poem and moved into prose. This habit enabled him to use the right word and to increase his word power.

One of Andreas Ericsson students wanted to improve her English.sHe went to a mall and asked the shopper the same question. Everyone answered the same one after hearing a similar answer, again and again, enabling her to understand the word by the speaker at full speed. If he acts on different questions each time, then his skill would not improve as much.

Watching English movies with subtitles repeatedly and trying to comprehend what was being said to check their understanding will enable them to learn a language virtually rather than watching so many English movies at a time.

Pilots and astronauts using simulators as their deliberate practice simulator allow you to get rid of your comfort zone struggle and learn from them. Going to the past leads to serious injury while simulators enable people to practice on their weakness. A fighter pilot practices a lot about takeoff and landing.

Growth of a Business

Toyota middle-size car company 30 years ago, but now it is the largest automaker the company follows a strategy of continuous improvement that finds and approves small problems. It focuses on every employee for their little progress every year that fixes a target and tries to fulfil it within that year.

Practice makes a man perfect, but deliberate practise can make you successful and get your goals. It helps you to reach your target in less time. It makes you an expert in your desired field.