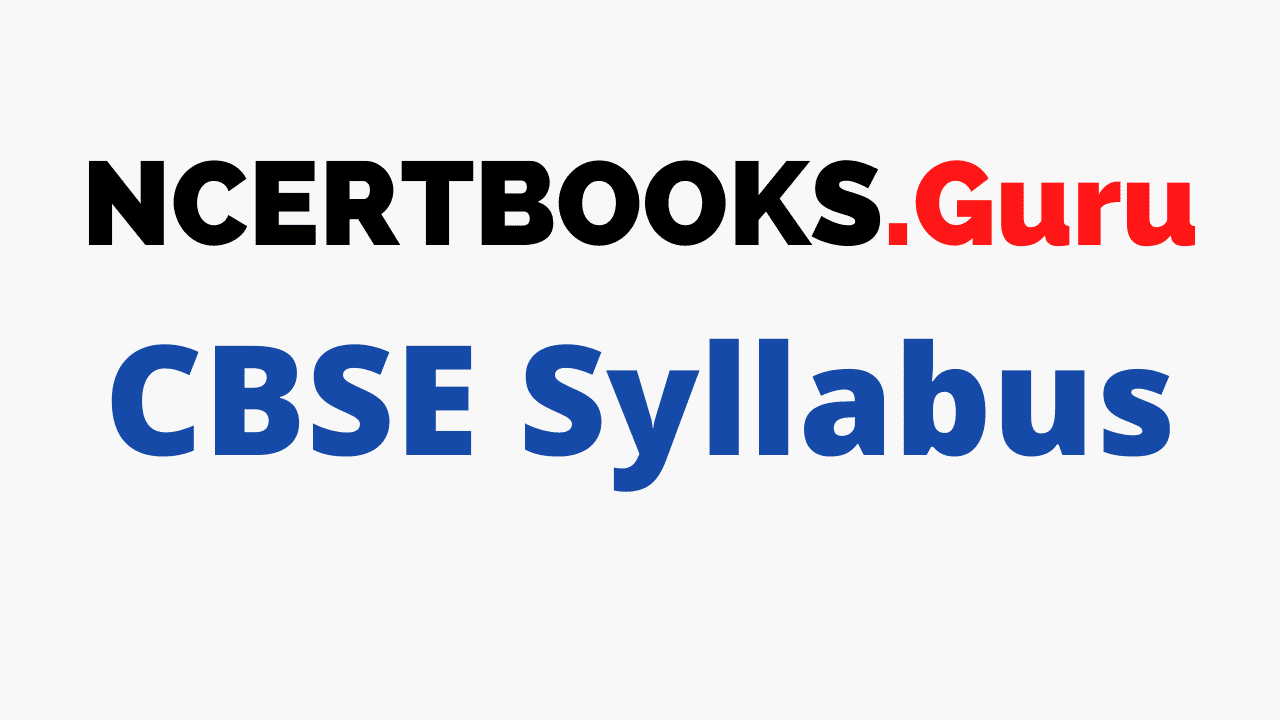 NCERT CBSE Syllabus for Class 12, 11, 10, 9, 8, 7, 6, and 1 to 5 updated Curriculum for 2021-22 for CBSE, UP Board (High School and Intermediate), MP Board, Gujrat Board (GSEB), and CBSE Board. NCERT Solutions based on the Latest CBSE Textbooks are available to download in pdf format. CBSE New Syllabus 2021-22 for all classes are available here for efficient learnings and good scores.

Special Scheme of Assessment for Board Examination (X-XII)

Objectives Of The CBSE Curriculum

The main objectives of the CBSE curriculum are as under:

Imagine one fine day you wake up and realize that all you have to cover in a month is nothing but a thought, a mere perception.

You have your exams coming in less than 30 days or so and you’ve got to complete 6-8 subjects without any knowledge of the limit that what you have to cover. Does it not sound like a nightmare?

Several programmes are organized in rural and backward areas to reach out to functionaries in these areas. The organization provides advice and support for the improvement of school education. It also promotes and conducts research, experimentation of innovative ideas and practice.

Remember how we used to take this syllabus as nothing but a burden? Well, today we realize how it helps us set our goals and focus on something distinctively. As we know, personality development is one of the most important factors in this fast-moving competitive world, a properly defined syllabus helps us achieve the same.

It also helps us build our character and mould our character efficiently. Keeping that aside, it has a well-effective system for the candidates to probate themselves against various aspects of life. It analyzes people on a fair basis, mainly based on their hard work.

The criteria of judging stand fair based on the fact how they let out a prescribed syllabus, same for everyone, supposed to be completed within the stipulated period of time. This lends us a helping hand to advance our focused mindset.

The content of the CBSE Syllabus being the same, it helps us grasp a strong inclination towards a certain field or subject. This affinity further helps us decide our respective careers and establish well-being on our own, for our own.

At this age, distractions are very common. It wastes our quality time which comes as an obstacle in the completion of our task in the limited time. Good thing is that we’re given a particular target to be completed by a precise time limit, which assists us to assemble a proper schedule for managing our time impartially for all the respective subjects.

Hence it helps us test and develops strong willpower which is indisputably helpful in the long run. As a result of which, this improves our time management skills and makes us realize the importance of time, how it is one of the vital aspects of our lives.

The CBSE Syllabus is just as much so as to make sure that it doesn’t result in a binding mental pressure but instead, it helps us to win against our odds and learn how to go through the otherwise perceived tension.

The mature self within us makes us realize the good and important factors of the syllabus which dusts away the feeling of it being nothing but a nightmare.

In this article, we will provide you with all the detailed information regarding CBSE Syllabus For Class 9 Social Science. Read on to find out.

Before getting into the details of CBSE Class 9 syllabus for Social Science, let us look at the unit-wise mark distribution:

CBSE Syllabus For Class 9 Social Science: India And The Contemporary World – I (History)

The CBSE Syllabus for Class 9 History is given below. The three themes in the first sub-unit are compulsory. From the second subunit, any one theme can be chosen.

Sub-Unit 1.1: Events And Processes: In this unit, the focus is on three events and processes that have shaped the identity of the modern world. Each represents a different form of politics and a specific combination of forces. One event is linked to the growth of liberalism and democracy, one with socialism, and one with a negation of both democracy and socialism.

Chapter 2: Socialism in Europe and the Russian Revolution

Chapter 3: Nazism and the Rise of Hitler

Sub-Unit 1.2: Livelihoods, Economies, and Societies: The themes in this section will focus on how different social groups grapple with the changes in the contemporary world and how these changes affect their Lives.

Case studies: Focus on two forest movements one in colonial India (Bastar) and one in Indonesia.

Chapter 5: Pastoralists in the Modern World

Case studies: Focus on two pastoral groups, one from Africa and one from India.

Case studies: Focus on contrasting forms of rural change and different forms of rural societies (expansion of large-scale wheat and cotton farming in USA, rural economy and the Agricultural Revolution in England, and small peasant production in colonial India)

Map Work Based on theme 4/5/6. (Internal choice will be provided)

The CBSE Syllabus For Class 9 Geography is given below:

The CBSE Syllabus For Class 9 Political Science is given below:

The CBSE Syllabus For Class 9 Economics is given below:

Chapter 1: The Story of Village Palampur: Economic transactions of Palampore and its interaction with the rest of the world through which the concept of production (including three factors of production (land, labor, and capital) can be introduced.

Chapter 2: People as Resource: Introduction of how people become a resource I asset; economic activities are done by men and women; unpaid work was done by women; quality of human resource; the role of health and education; unemployment as a form of non-utilization of human resource; sociopolitical implication in the simple form.

Chapter 3: Poverty as a Challenge: Who is poor (through two case studies: one rural, one urban); indicators; absolute poverty (not as a concept but through a few simple examples)-why people are poor; unequal distribution of resources; comparison between countries; steps taken by the government for poverty alleviation.

Chapter 4: Food Security in India: Source of Food grains, variety across the nation,famines in the past, the need for self sufficiency, role of government in food security, procurement of food grains, overflowing of granaries and people without food, public distribution system, role of cooperatives in food security (food grains, milk and vegetables ration shops, cooperative shops, two-three examples as case studies)

Chapter 1: The French Revolution: Outline map of France (for locating and labeling/identification)

Chapter 2: Socialism in Europe and the Russian Revolution: Outline map of World (for locating and labeling/identification)

Chapter 3: Nazism and the Rise of Hitler: Outline Map of World (for locating and labeling/identification)