Question 2.
Ask older members of your family about what they used to listen to on the radio when there was no TV around. Find out from them when the first TV came to your area when was cable TV introduced?
Answer:
In the past days, people usually listened to news and songs on the radio.

Question 3.
How many people in your neighourhood use the internet?
Answer:
About 20 to 25%.

Question 4.
List three things that you know about some other part of the world from watching television?
Answer:

Question 5.
Can you list three defferent products that are advertised during your favourite TV programme?
Answer:

Question 7.
Are the above stories in the two newspapers similar? Add if not, why not? What, is your view, are the similarities and the differences?

Answer:
1. No, the two stories are not similar.

2. The similarities between the two stories are both are dealing with pollution, polluting factories and protests. The differences are that in the first story government is taking action against polluting factories and people are protesting by blocking roads and disrupting traffic. In the second story, the government has sealed about one lakh factories in the residential areas. This has caused unrest among owners and workers. They are planing a one-day bandh to protest against this closure.

Question 10.
What is the consequence of the media ‘setting the agenda’ by reporting on the Fashion Week rather than the slum demolitions?
Answer:
As citizens of a democracy, the media has a very important role to play in our lives because it is through the media that we hear about issues related to the working of the government. The media decides what to focus on and in this way it ‘sets the agenda’. However, now-a- days, media’s close relationship with business often means that a balanced report is difficult to come by.

Question 11.
Can you think of an issue that does not seem important to you because it is never featured the media?
Answer:
Yes, corruption and black money of the politicians.

It provides news and discuss events taking place in the country and the world. It is on the basis of this information that citizens, can, for example learn how government works. And to they wish, they can take action on the basis of these news stories.

It keeps the public aware about the corruption, wrong happening in the country, etc.

Question 13.
Can you give this diagram a title? What do you understand about the link between media and big business from this diagram. 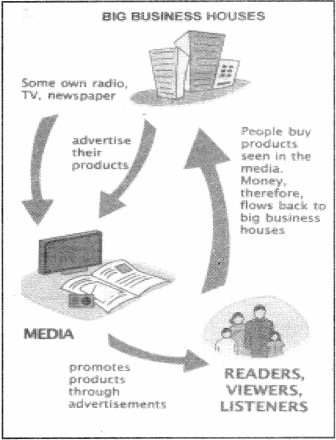 Answer:
Agenda of Media
Now-a-days, media’s close relationship with business often means that a balanced report is difficult to come by. Big businessmen advertise their products through media. This involves a lot of money. Media promotes products through advertisements. People buy products seen in the media. Thus, whatever is invested, plus income flows back to big business houses.

Question 14.
You have read about the ways in which the media ‘sets the agenda’. What kind of effect does this have in a democracy? Provide two examples to support your point of view.
Answer:
Media, by focusing on particular issues, influences our thoughts feelings and actions, and brings important issues to our attention. Due to the significant influence it plays in our lives and in shaping our thoughts, it is commonly said that the media ‘set the agenda’.

For example, recently the media drew our attention to alarming levels of pesticides in cola drinks. They reported this despite the government’s resistance by bodly declaring that the colour were unsafe. In covering this story, the media positively helped us focus on an issue that affects our lives and one that we might not even have been aware of it had it not been for media reporting.

Recently, Media also reported about desi ghee being mixed with animal fat and being sold in the market. This news alarmed us about the consequences of eating such ghee. And, thus, saved us from many diseases and side effects.

Question 4.
As a class project, decide to focus on a particular news topic and cut out stories from different newspapers on this. Also watch the coverage of this topic on TV news. Compare two newspapers and write down the similarity and differences in their reports. It might help to ask the following questions
(a) What information is this article providing?
(b) What information is it leaving out?
(c) From whose point of view is the article being written?
(d) Whose point of view is being left out and why?
Times of India, March 11, 2007 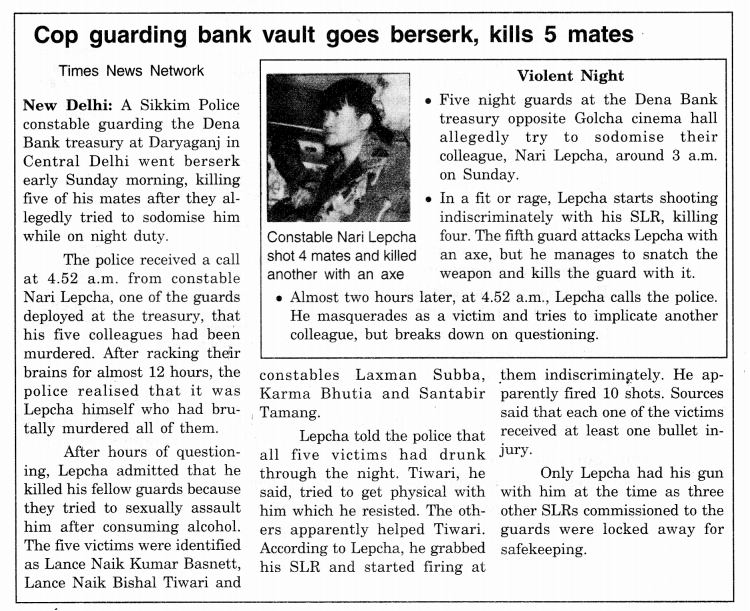