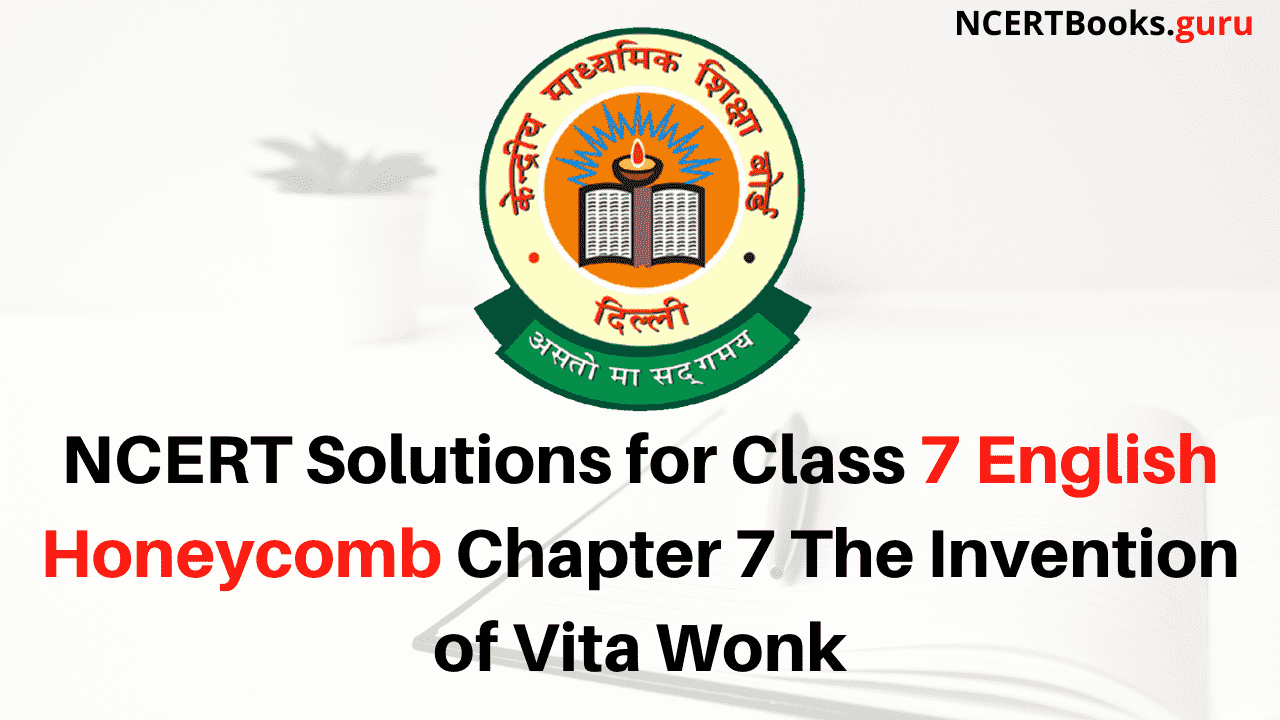 Question 2.
‘What is the oldest living’ thing in the world ? What lives longer than anything else ?” (Page 99)
Questions.

Question 4.
I produced one tiny cupful of oily black liquid and gave four drops of it to a brave twenty-year-old Oompa-loompa volunteer to see what happened.” (Page 102)
Questions.

Question 5.
And thus, my dear Charlie, was Vita-Wonk invented.” (Page 102)
Multiple Choice Questions
Question 1.
The extract is addressed to
(a) Charlie
(b) The cook
(c) Willy
(d) The volunteer
Answer.
(a) Charlie

(iii) Mr Wonka wants to invent a new thing which will make people
(a) younger,
(b) older.
Answer.
(b) older

Question 2.
Can anyone’s age be a minus number ? What does “minus 87” mean?
Answer.
A man starts ageing from the moment he is born. Since then, it is all plus. Thus
no one’s age can be a minus number. So ‘minus 87′ means that after 87 years, he will become zero and start aging then. In other words, such a man will come to earth after eighty-seven years.

Question 2.
How many of the oldest living things can you remember from Mr Wonka’s list ? (Don’t look back at the story !) Do you think all these things really
exist, or are some of them purely imaginary ?
Answer.
Mr Wonka mentions many of the oldest things. Some of these things do not really exist. These are purely imaginary. He says he collected a pint of sap from a 4000-year-old Bristlecone pine. He mentions a list of many things like the toe-nail clippings of a 168-year-old Russian farmer, an egg of a 200-year-old tortoise, the tail of a 51-year-old horse in Arabia, the whiskers of a 36-year-old cat called Crumpets, an old flea, the tail of a 207-year-old giant rat from Tibet.

Question 4.
What happens to the volunteer who swallows four drops of the new
invention ? What is the name of the invention ?
Answer.
The volunteer who swallows the four drops of the new invention, suddenly becomes very old. His hair drop off, his teeth start falling. He begins wrinkling and shrivelling up all over. He is a twenty-year-old man but now he looks seventy five.

Question 1.
What do you call these insects in your language ?

Add to this list the names of some insects common in your area.
Answer.
Termite, fly, bee, beetle, wasp and butterfly.

Question 2.
Fill in the blanks in the recipe given below with words from the box.

Wash and cut the vegetables ; shred the palak. Put everything in a pressure cooker. Let the cooker whistle three times, then switch it off. Fry a few cumin seeds in oil and add to the palak-dal.

Question 3.
A ‘family tree’ is a diagram that shows the relationship between the different members of a family. Fill in the family tree below with names, ages, and other details you think are relevant (you may even stick photographs, if you have them). Put your family trees up in the class.
Answer.
Students should collect information about their family and prepare this family-tree themselves

Using Do for Emphasis
Charlie asks, “What did happen ?” This is a way of asking the question “What happened ?” with emphasis. Given below are a few emphatic utterances. Say them to your partner. Let your partner repeat your utterance without the emphasis. Your partner may also add something to show she/he disagrees with you.

Question 1.
(i) Make a list of the trees Mr Wonka mentions. Where do these trees grow? Try to find out from an encyclopaedia. Write a short paragraph about two or three of these trees.
(ii) Name some large trees commonly found in your area. Find out something about them (How old are they? Who planted them ? Do birds eat their fruit ?), and write two or three sentences about each one of them.

Question 2.
Find out something interesting about age, or growing old, and write a paragraph about it. Following are a few topics, suggested as examples.
• The age profile of a country’s population-does it have more young people than old people, or vice versa ? What are the consequences of this ?
• How can we tell how old a tree, a horse, or a rock is ?
• What is the ‘life expectancy’ of various living things, and various populations (how long can they reasonably expect to live) ?
Answers.
Question 1.
(i) Mr Wonka mentions the following four trees :
(a) Douglas fir
(b) The oak
(c) The cedar
(d) Bristlecone pine.
Douglas fir is an evergreen tree. It is a giant tree which grows in North America.
The oak is a very huge tree of the beech family. It is chiefly grown in America. A sea-port in W. California, on San Francisco is called oak-land.
The cedar are tall trees with wide spreading branches. Famous for its wood it is found in many countries including India, Nepal and other Asian countries.
Bristlecone pine is a small pine. It is found in rocky mountains. It is believed to be the oldest living tree with some 4000 year old specimens.
Oak and cedar are the most well-known and useful trees of these. Their wood is very useful. It is used as building material. Cedar wood is used in making beautiful furniture.
(ii) Neem, peepal and jamun are some of the large trees very commonly found in our area. They live for many years but not as long as oak or Bristlecone pine. Peepal grows by itself. Nobody seems to have planted them. Neem and jamun are the favourites of the villagers. Neem has medical properties while the fruit of jamun is very sweet and healthful. The birds eat jamuns and also the neem-fruit.

Question 2.
“Grow old along with me,
The best is yet to be
The last of life for which the first was made.”
The above lines from Browning show the beauty of age. This is indeed the best part of life for those who have lived the earlier parts well. In our country, India, the majority of the population is young. The great benefit of it is that these people are able to work hard for the progress of the country. Today, we have scientific methods by which we can measure the age of a human being, a plant or a rock. Various living things have different life expectancy. Generally small creatures like worms and insects have a very short span of life. Most animals live a life shorter than that of most human beings. However some snakes and sea-animals live very long. The elephants too live long. Human beings have a life expectancy of 80-100 years.