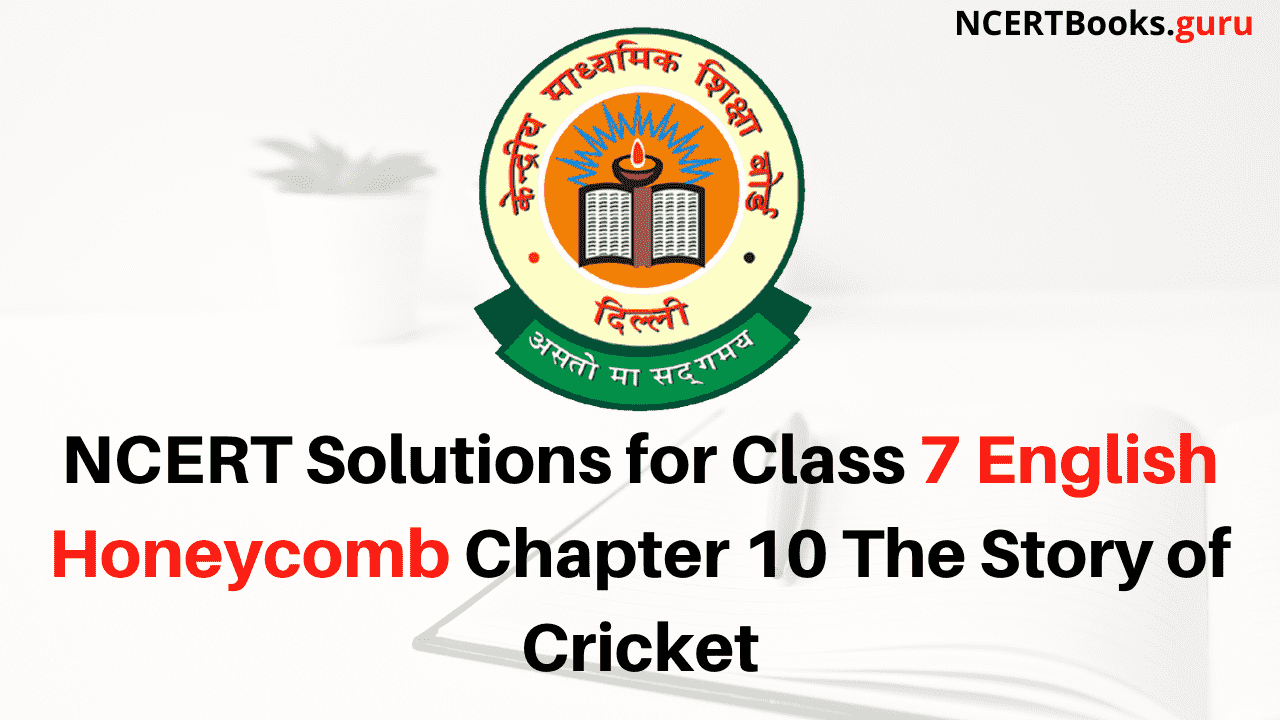 Question 2.
But in the matter of protective equipment, cricket has been influenced by technological change. (Page 143)
Questions.

Question 4.
C.K. Nayudu, an outstanding Indian batsman of his time, lives on in the popular imagination when some of his great contemporaries like Palwankar Vithal and Palwankar Baloo have been forgotten. Even though Nayudu was past his cricketing prime when he played for India in its first Test matches against England starting in 1932.
(Page 145)
Questions.

Question 5.
Television coverage changed cricket. It expanded the audience for the game
by beaming cricket into small towns and villages. It also broadened cricket’s social base.
(Page 146)
Multiple Choice Questions
Question 1.
Cricket owes its present popularity to
(a) Print Media
(b) Television
(c) The Parsis
(d) The Modern Cricketers
Answer.
(b) Television

Question 3.
India has the largest viewership for the game of ……
(a) Cricket
(b) Hockey
(c) Football
(d) Basketball
Answer.
(a) Cricket

Question 2.
There is a historical reason behind both these oddities’. In the preceding two paragraphs, find two words/phrases that mean the same as ‘oddities’.
Answer.
(i) Peculiarities
(ii) Curious characteristics

Comprehension Check (Page 146)
Write True or False against each of the following sentences :
(i) India joined the world of Test
cricket before independence. ……………
(ii) The colonisers did nothing to encourage
the Parsis in playing cricket. ………………
(iii) Palwankar Baloo was India’s
first Test captain. …………….
(iv) Australia played its first Test against
England as a sovereign nation. ………..
Answers.
(i)True
(ii)True
(iii) False
(iv) False

Question 1.
A ‘professional cricket player is one who makes a living by playing cricket. Find
the opposite of professional in the last paragraph.
Answer.
amateur.

Working with the Text

Question 1.
Name some stick-and-ball games that you have witnessed or heard of.
Answer.
Hockey and golf.

Question 5.
Why has cricket a large viewership in India, not in China or Russia ?
Answer.
Cricket is not a common game in China and Russia. So it is natural that the people of these countries are not much interested in watching the game where there are no players from their country. On the other hand, cricket is the most popular game in India. That is why cricket has a large viewership in India and not in China or Russia.

Question 6.
What do you understand by the game’s (cricket) ‘equipment ?   (V. Imp.)
Answer.
By the game’s (cricket) equipment, we understand the things which are required to play the game when the players are there. The author has divided them in two groups—tools and protective equipment. Tools are bats, balls, stumps and bails whereas the protective equipment consists of pads, gloves and helmets.

Question 7.
How is Test cricket a unique game in many ways ? (Imp.)
Answer.
Test cricket is a unique game in many ways. One is, that a Test match can go on for five days and still end in a draw. No other modern sport takes even half as much time to complete. Another unique feature is the ground. While the length of the pitch is specified, the shape and size of the ground is not.

Question 8.
How is cricket different from other team games ?   (Imp.)
Answer.
Cricket is different from other team games in many ways. Unlike other team games it has variety. Thus we have Test cricket, one day cricket and now even 20-over cricket.
Test cricket is the only game in the world which may be played for five days and yet end in a draw. The ground for the Test match is not clearly specified.
Cricket was the earliest modern team sport to be codified. Its laws were drawn in 1744. Cricket has changed with changing times and yet fundamentally remains the same. Its most important tools, the bat and the balls are still made of natural
pre-industrial materials unlike golf and tennis. Cricket has refused to use plastic and fibre glass.

Question 9.
How have advances in technology affected the game of cricket ?
Answer.
In the matter of protective equipment, cricket has been affected by advances in technology. The invention of vulcanized rubber led to the introduction of pads. Technology has also helped in making helmets out of metal and synthetic light weight material. kg.

Question 10.
Explain how cricket changed with changing times and yet remained unchanged in some ways. (V. Imp.)
Answer.
If we look at cricket’s equipment, we can see how cricket has changed with changing times and yet remained unchanged in many ways.
Cricket’s most important tools are all made of natural pre-industrial materials. Even today both bats and balls are handmade. The material of the bat has changed slightly over time. In the beginning it was one piece. Now it consists of two pieces.
But in the matter of protective equipment technology has had its influence. The pads, gloves and helmets were not available to the players of a by-gone era.

Clues to the hidden words are given below.
Horizontal : six deliveries, four runs, attacked while out of arena, no result, stumps, fielder to the off side of the wicketkeeper.
Vertical : stumps flying, back to the pavilion, a lofty one, mid-air mishap, not even one out of six, goes with bat.

Question 2.
Add -ly to the italicised word in each sentence. Rewrite the sentence using
the new word. See the examples first.
• He runs between wickets as if his legs were stiff.
He runs between wickets stiffly.
• Why did the batsman swing the bat in such a violent manner ?
Why did the batsman swing the bat so violently ?
(i) It is obvious that the work has not been done in a proper way.
(ii) He made the statement in a firm manner.
(iii) The job can be completed within a week in an easy way.
(iv) You did not play in a serious manner, or else you would have won the match.
(v) She recited the poem in a cheerful manner.
Answers.

(i) It is obvious that the work has not been done properly.
(ii) He made the statement firmly
(iii) The job can be completed within a week easily.
(iv) You did not play seriously or else you would have won the match.
(v) She recited the poem cheerfully.

Question 3.
Use the following phrases appropriately in place of the italicised words in the sentences given below.

(i) Actually, I didn’t intend to come to your place. I reached here without planning.
(ii) Sunil, there’s a letter for you in today’s post. There’s one for me also.
(iii) Everybody thought I had composed the poem. The truth is my younger sister did it.
(iv) The doctor told the patient to make sure that he took his pills on time.
(v) It will be better for us to plan our trip before setting out.
Answers.

(i) Actually, I didn’t intend to come to your place. I reached here by accident.
(ii) Sunil, there’s a letter for you in today’s post. There’s one for me as well.
(iii) Everybody thought I had composed the poem. As a matter of fact my younger sister did it.
(iv) The doctor told the patient to see to it that he took his pills on time.
(v) We had better plan our trip before setting out.

Question 1.
Complete each of the following words using gh, ff or f. Then say each word
clearly after your teacher.

Question 2.
Write two paragraphs describing a bus ride to watch a cricket match in a village. Use the following points. Add some of your own.

Answer.
Last week I went to visit a nearby village Palampur. A cricket match was to be held there. Early in the morning I started my journey in a bus. It was old and rickety. It was over-crowded. The passengers were mostly villagers. They were wearing dirty clothes. Foul smell of dusty clothes was intolerable. However, the passengers were friendly and co-operative. They were enjoying. The bus reached the village after about two hours. I felt relaxed.
First I visited the fair and enjoyed it. Then the match began. Villagers were excited. There was a big crowd. Local officials, Village Pradhan and other chiefs of the village were there. The match ended in the evening. It was really exciting. I started again the troublesome journey. I reached home at about 10 pm. I was very tired and exhausted. After all it was memorable and adventurous.