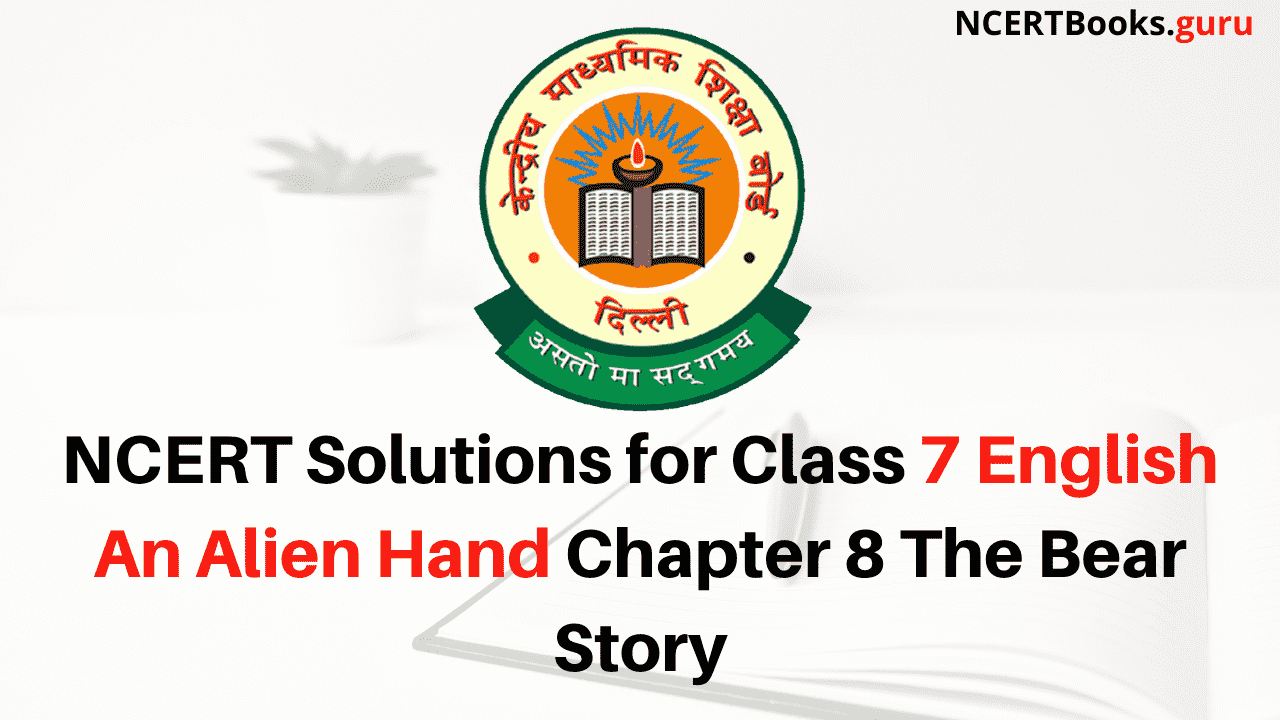 Answer the following questions :
Question 1.
Where did the lady find the bear cub ? How did she bring it up ?
Answer:
The lady found the bear cub in the dense forest near her house. She brought it up on the bottle with the help of the cook.

Question 2.
The bear grew up but “he was a most amiable bear”. Give three examples to prove this. (Imp.)
Answer:
The bear was a most amiable bear. He did not dream of harming anybody, man or beast. He looked amicably at the cattle grazing in the field but caused them no harm. Sometimes he went into the stable with his mistress. The three horses there did not mind it in the least. The children used to ride his back. More than once they had been found asleep between his two paws.

Question 3.
What did the bear eat ? There were two things he was not allowed to do. What were they ?
Answer:
The bear ate the same food as the dogs and often out of the same plate. He ate bread, porridge, potatoes, cabbages and turnips. Like all bears he was a vegetarian and he liked fruit the most. He was not allowed to climb the apple tree and eat them. He was also not allowed to touch the beehive.

Question 5.
What happened one Sunday when the lady was going to her sister’s house ? What did the lady do ? What was the bear’s reaction ? (Imp.)
Answer:
One Sunday the lady was going to her sister’s house. She heard the cracking of tree branches in the forest. She looked back and was very angry to see the bear following her. She told him in her hardest tone to go back. The bear did not seem to listen. Then the lady saw that the bear had even lost his new collar. She hit the bear with her parasol so hard that it broke into two. The bear stopped and opened its mouth several times as if wanting to say something. Then the bear turned round and went back. However, it stopped now and then to look back at the lady. Ultimately the lady lost sight of him.

Question 6.
Why was the bear looking sorry for himself in the evening ? Why did the cook get angry with her mistress ? (V. Imp.)
Answer:
The bear was looking sorry for himself in the evening. The poor creature had been on chain all day. He did not like to be chained. He was waiting for the lady to come and release him. However, when the lady came, she began to scold the bear. She also threatened him with punishment. The cook heard it and rushed out from the kitchen. She got angry with her mistress because she loved the bear much. She knew that the bear had been as gentle as an angel. So she asked her mistress to bless him instead of scolding him.

Discuss the following topics in groups.
Question 1.
Most people keep dogs and cats as pets. Can you think of some unusual pets that people keep ?
Answer:
Not very long ago, many Indians kept many wild animals as pets. Among these were included not only deers and bears but even wolves and tigers. There are many snake-charmers in our country who keep snakes as pets. Some foreigners and even Indians in the South have crocodiles as their pets.