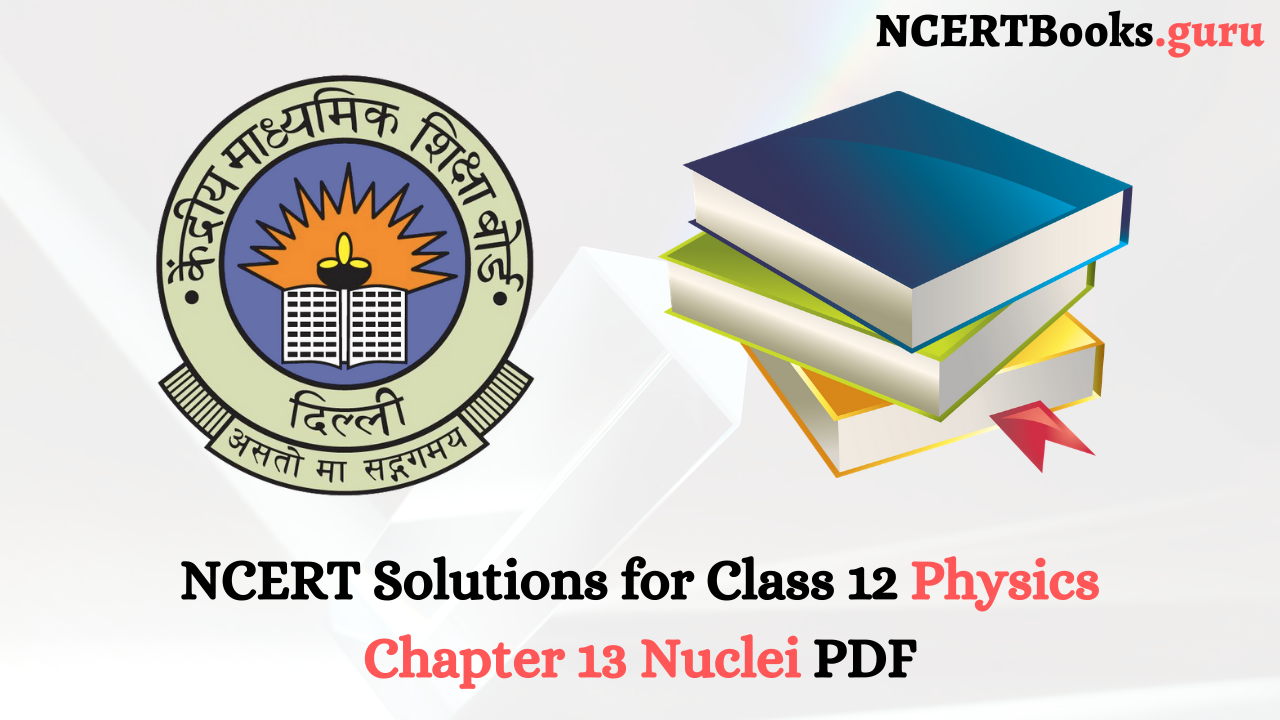 NCERT Solutions for Class 12 Physics Chapter 13 Nuclei PDF is one of the smartest study resources for all students out there during their preparation. It not only helps CBSE students but also state boards students like UP, Bihar, HP, MP, Gujarat, and many others. It supports you all in understanding the concepts clearly as they are written in a simple language.

So, we as a team from Ncertbook.guru advice you to refer this article and download NCERT Questions and solutions of ch 13 Nuclei for free in PDF format. You can access them anywhere and everywhere you wish during the preparation and get a great command on the physics Nuclei concept.

In this chapter, you will deal with the important concept which is the core of atoms ie., Nuclei. From the Nuclei introduction to various other topics are discussed efficiently in the NCERT Solutions for class 12 physics chapter 13 Nuclei. Students will gain complete knowledge about the topics and subtopics of Nuclei from the important questions listed over in the NCERT Solutions PDF.

12th Class Physics NCERT Solutions of Chapter 13 Nuclei available over here and they are prepared by subject experts as per the CBSE Board Guidelines. You will find detailed answers to the class 12 physics textbook questions along with ch 13 nuclei exemplary problems, worksheets, and exercises here which aids you to grasp the complete knowledge on the topics of Nuclei.

Question 5.
A given coin has a mass of 3.0 g. Calculate the nuclear energy that would be required to separate all the neutrons and protons from each other. For simplicity assume that the coin is entirely made of 6329Cu atoms (of mass 62.92960 u). The masses of proton and neutron are 1.00783 u and 1.00867 u, respectively.
Answer:

Question 7.
A radioactive isotope has a half-life of T years. After how much time is its activity reduced to 3.125% of its original activity (b) 1% of original value ?
Answer:

Question 8.
The normal activity of living carbon-containing matter is found to be about 15 decays per minute for every gram of carbon. This activity arises from the small proportion of radioactive 146C present with the stable carbon isotope
612C When the organism is dead, its interaction with the atmosphere (which maintains the above equilibrium activity) ceases and its activity begins to drop. From the known half-life (5730 years) of 146C , and the measured activity, the age of the specimen can be approximately estimated. This is the principle of 146C dating used in archaeology. Suppose a specimen from Mohenjodaro gives an activity of 9 decays per minute per gram of carbon. Estimate the approximate age of the Indus-Valley civilisation.
Answer:

Question 11.
Obtain approximately the ratio of the nuclear radii of the gold isotope 19779Au and silver isotope 10747Au.
Answer:

Question 15.
The Q value of a nuclear reaction A + b -> C + d is defined by
[Q = mA + mb-mc– md] c2 where the masses refer to nuclear rest masses. Determine from the given data whether the following reactions are exothermic or endothermic.

Question 17.
The fission properties of 23994Pu are very similar to those of 23592uu. The average energy released per fission is 180 MeV. How much energy, in MeV, is released if all the atoms in 1 kg of pure
23994Pu undergo fission ?
Answer:

Question 18.
A 1000 MW fission reactor consumes half of its fuel in 5.00 y. How much
23592u did it contain initially ? Assume that all the energy generated arises from the fission of 23592u and that this nuclide is consumed by the fission process.
Answer:

Question 19.
How long an electric lamp of 100 W can be kept glowing by fusion of 2.0 kg of deuterium ? The fusion reaction can be taken as

Question 20.
Calculate the height of Coulomb barrier for the head on collision of two deuterons. The effective radius of deuteron can be taken to be 2.0 fm.
Answer:
The initial mechanical energy E of the two deutrons before collision is given by
E = 2 K.E.

Question 21.
From the relation R = R0 A1/3, where R0  is a constant and A is the mass number of a nucleus, show that nuclear matter density is nearly constant (i.e. independent of A)
Answer:

Question 22.
For the β+ (positron) emission from a nucleus, there is another competing process known as electron capture (electron from an inner orbit, say, the K- shell, is captured by the nucleus and a neutrino is emitted).

Show that if β+ emission is energetically allowed, electron capture is necessarily allowed but not vice-versa
Answer:

Question 26.
Under certain circumstances, a nucleus can decay by emitting a particle more massive than an α-particle. Consider the following decay processes :

(a) Calculate the Q values for these decays and determine that both are energetically possible.
(b) The Coulomb barrier height for α-particle

Question 27.
Consider the fission of 23992u by fast neutrons. In one fission event, no neutrons are emitted and the final stable end products, after the beta-decay of the primary fragments, are 14058Ce and 9944Ru. Calculate Q for this fission process. The relevant atomic and particle masses

Question 28.
Consider the D-T reaction (deuterium-tritium-fusion) given in eqn. :

(b) Consider the radius of both deuterium and tritium to be approximately 1.5 fm. What is the kinetic energy needed to overcome the Coulomb repulsion ? To what temperature must the gases be heated to inititate the reaction ?
Answer:
From the equation given in the question,

mN refer to nuclear mass of the element given in the brackets and mn = mass of neutron. If in represents the atomic mass, then

Question 31.
Suppose India had a target of producing by 2020 AD, 200,000 MW of electric power, ten percent of which was to be obtained from nuclear power plant. Suppose we are given that, on an average, the efficiency of utilisation (i.e., conversion to electric energy) of thermal energy produced in a reactor was 25%. How much amount of fissionable uranium did our country need per year by 2000 ? Take the heat energy per fission of 235U to be about 200 MeV. Avogadro’s number = 6.023 x 1023 mol-1.
Answer:

Ncertbooks.guru is a reliable website in providing free exam resources like NCERT Solutions, books, exemplar solutions, previous paper, etc. to help the students of all state and central boards. So, today we are with NCERT Solutions for class 12 physics chapter 13 Nuclei in this article & we hope it helps you more during your preparation.