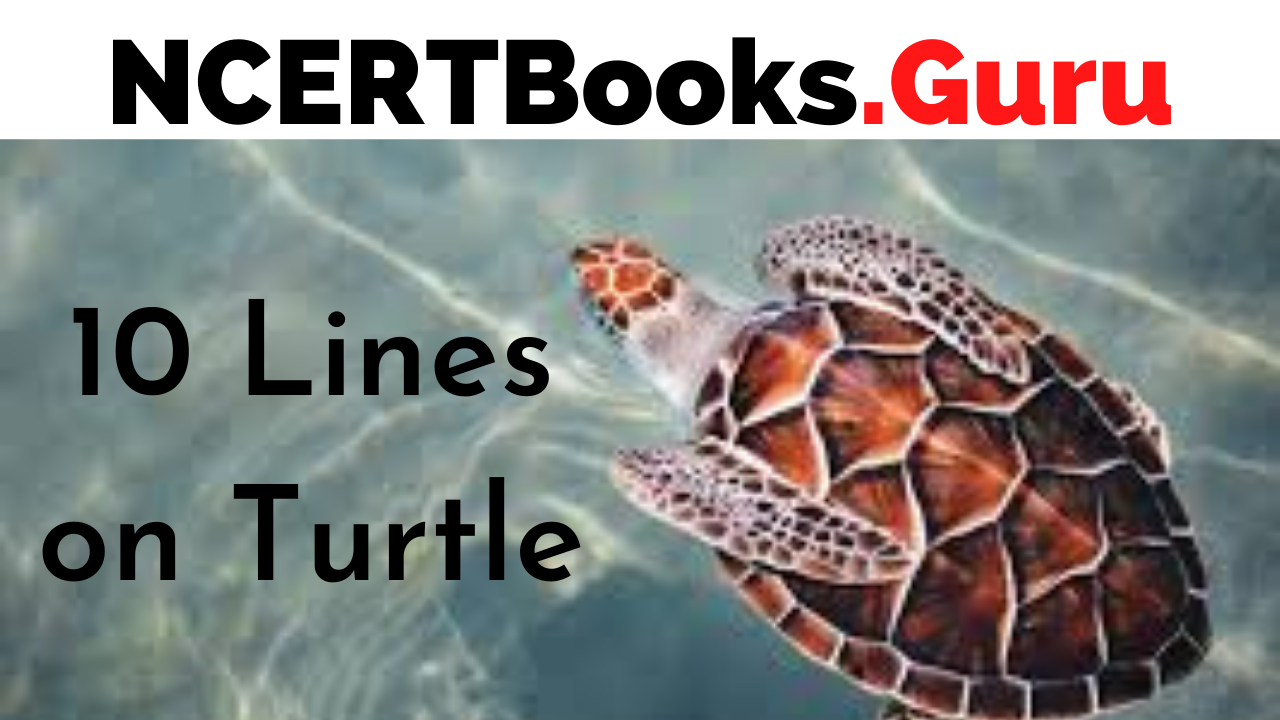 10 Lines on Turtle: Turtles are primitive and one of the eldest group of reptiles that evolved millions of years ago. These reptiles have hard shells that protect them from any danger. They can survive in any climate. Hence, you will find them almost anywhere in the World. Since they exist even before nature, they play a huge role in controlling the underwater World’s biodiversity with the consumption of grass, seaweeds, and sponges. They also increase the production of nutrients in the sea bed. May 23rd is dedicated to the turtles and is known as “World Turtle Day”.

Today, many people pet freshwater turtles at home and believe in bringing good fortune. Red-eared sliders are one of the famous freshwater turtle pets. However, according to a research conducted by the World Wildlife, (WWL), it is observed that sea turtles are lowering down in number due to water pollution and wastes that are eventually hurting and killing them. Here we have assembled three sets of ten lines on turtles that will help you to get more information about turtles, their types, and behavior.

10 Lines on Turtle for Students and Children in English 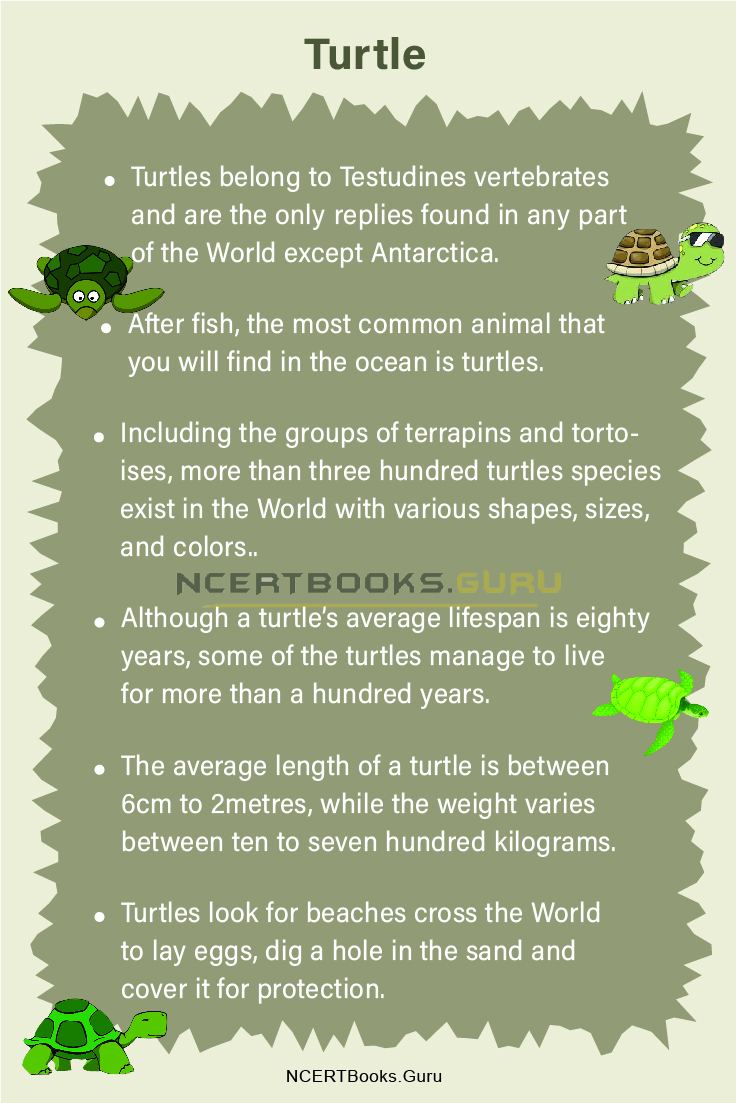 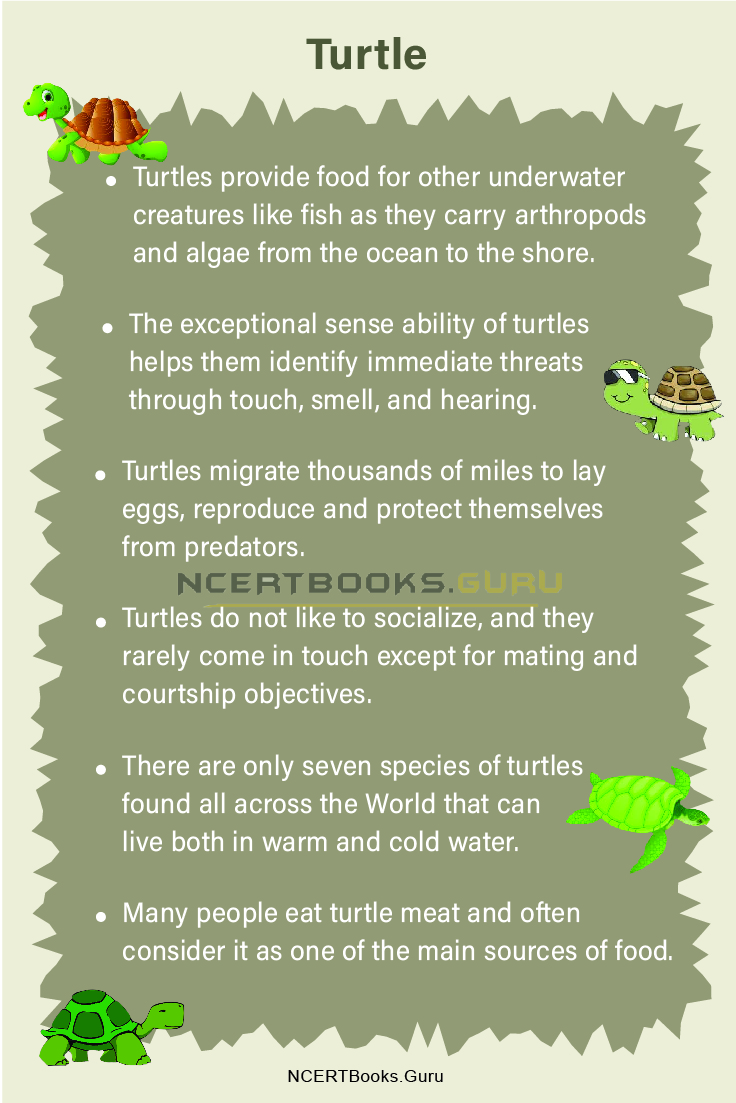 Many people pet freshwater turtles in their house. Turtles are like humans best friend. However, they do not like to socialise. There are various species of turtles found around the World. However, the five main species are hawksbill, loggerhead, leatherback, green and olive ridley. The turtles are slowly running towards extinction, especially with the humans’ slaughtering for their shells, meat and skin. To prevent such practices, the government in various countries has made turtle killing and keeping them as a pet at home illegal. World Wildlife is trying their best to save the sea turtles from extinction.

Question 1.
Where do you find the Roti Island Snake Turtles?

Answer:
According to a zoo in San Diego, the Roti Island Snake Turtles are found only on the sixty-two square kilometres of Indonesia’s Roti Island.

Question 2.
What is the turtle’s shell made up of?

Answer:
According to Animal Diversity Web, of the Michigan University, the shell of a turtle is a modified ribcage which is a part of it’s the vertebral column.

Question 3.
Do turtles make a sound?

Answer:
Yes! Turtles make noises like belching humans, or electric motors, some even bark like dogs. Did you know that a South American red-footed tortoise clucks like a chicken?