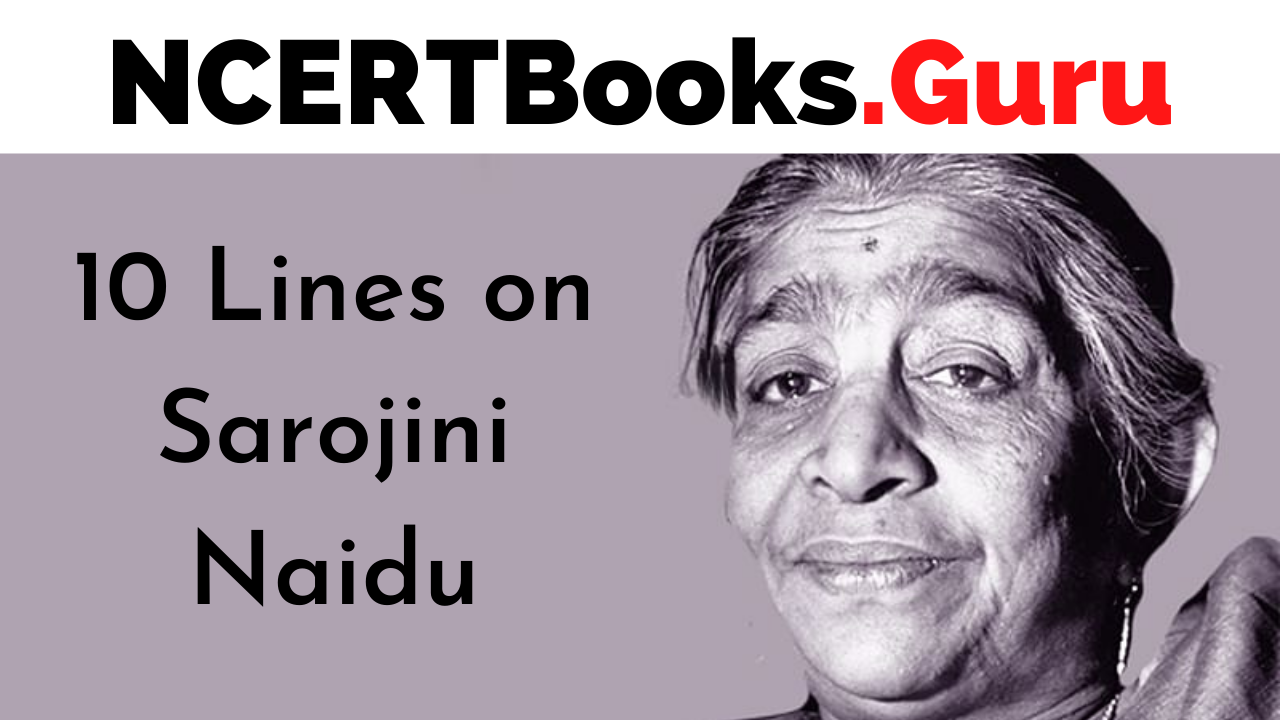 Sarojini Naidu is famously known as ‘Nightingale of India.’ She had a brilliant mind from childhood and started writing poems from a young age. The Nightingale of India started pursuing her higher studies in London. It was in London that she met her husband and soulmate Paidipatti Govindarajuli Naidu.

She was introduced to Indian politics and freedom struggle by Gopal Krishna Gokhale. With Mahatma Gandhi’s guidance, she got involved in the freedom struggle and fought for the attainment of self-rule. Below, there are three sets of 10 lines on Sarojini Naidu which will be useful for students who are looking to write essays and write assignments about Sarojini Nasaid.

The following 10 lines on Sarojini Naidu will be useful for students and children in classes 1, 2, 3, 4, and 5. 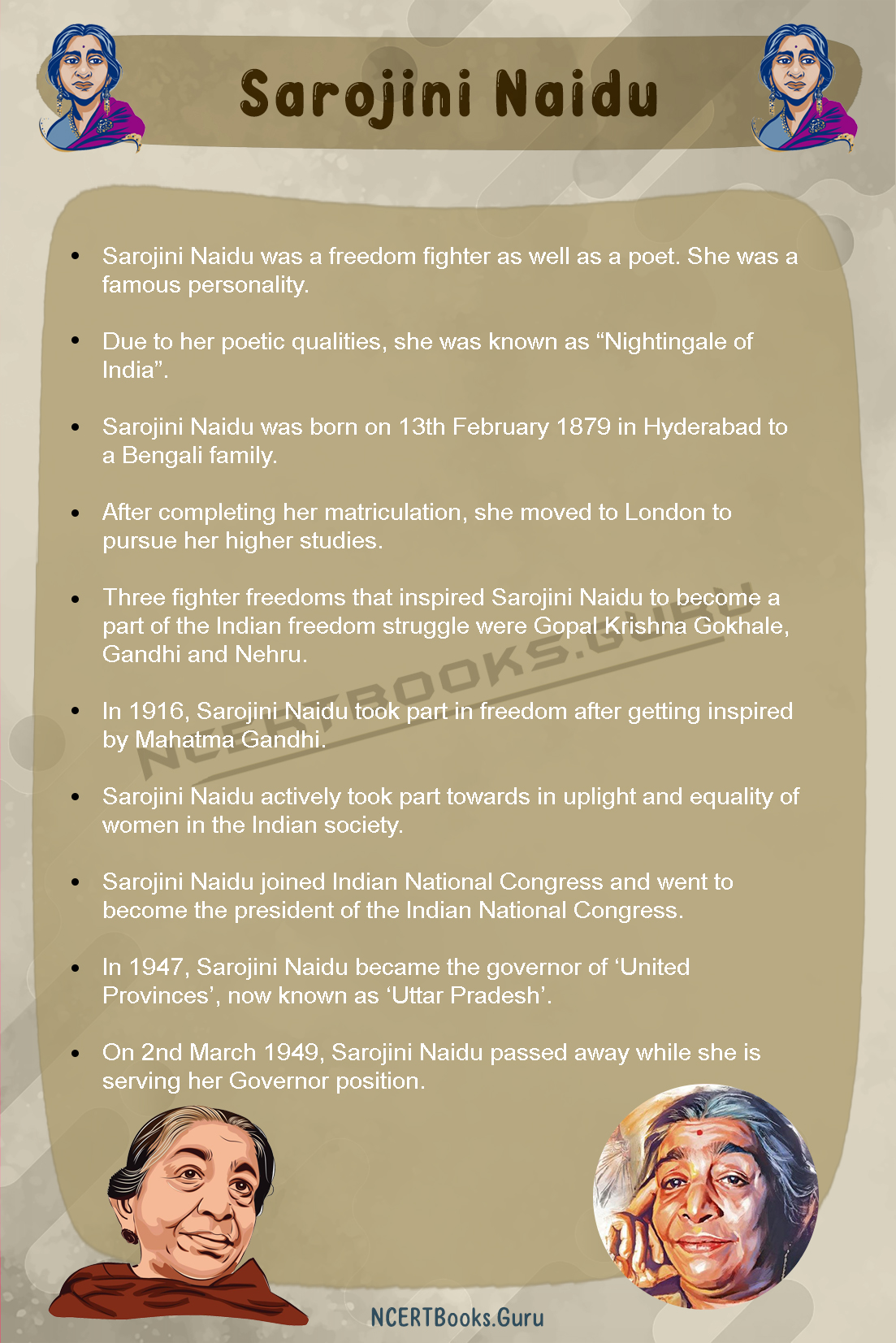 The following 10 lines on Sarojini Naidu will be useful for students in classes 6, 7, 8 and 9.

The following 10 lines on Sarojini Naidu will be useful for students in classes 10, 11 and 12. 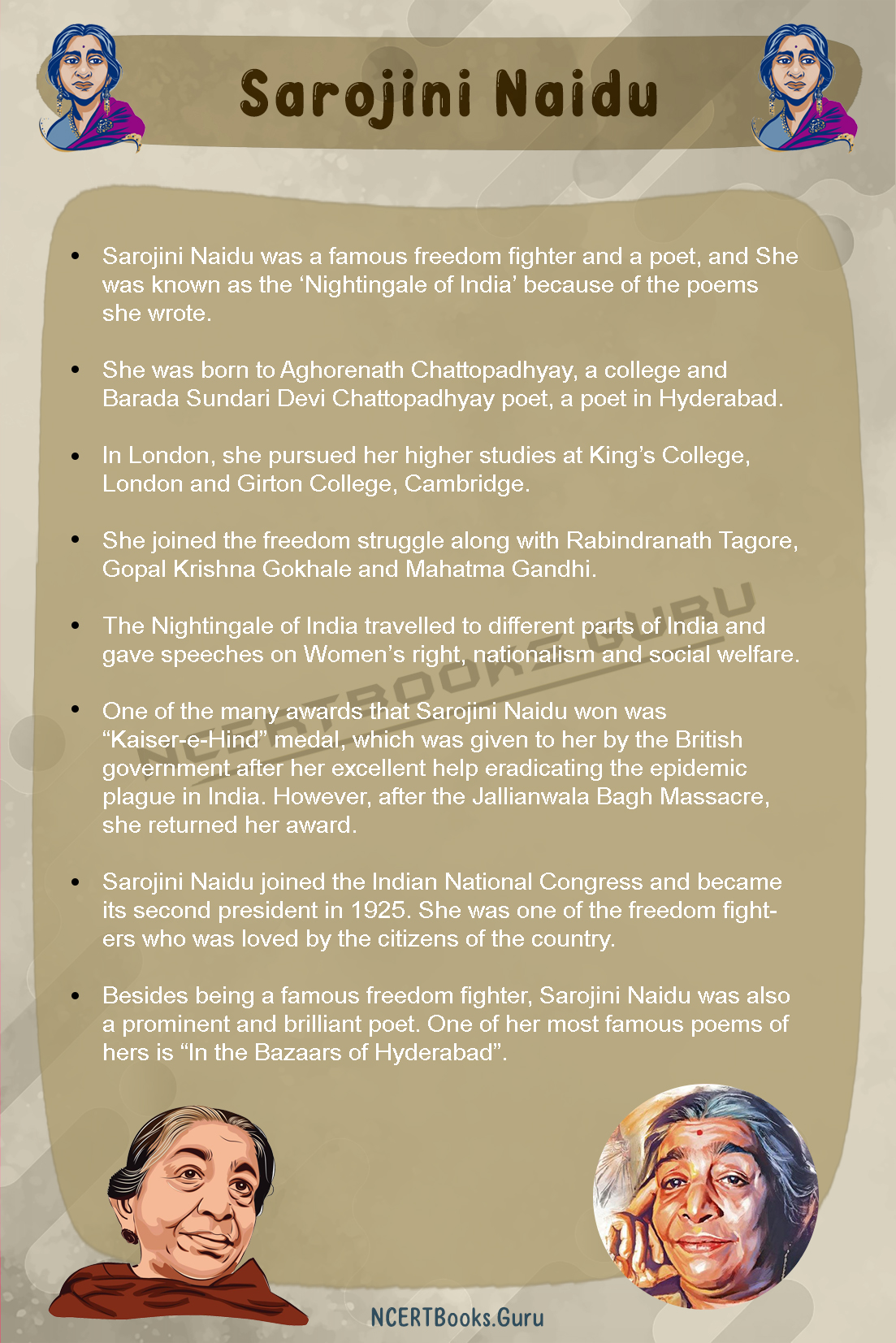 Question 1.
Who is Sarojini Naidu?

Answer:
Sarojini Naidu was a freedom fighter, feminist, poet, the president of the Indian National Congress and the Governor of United Provinces. She was born to Aghorenath Chattopadhyay, a college and Barada Sundari Devi Chattopadhyay, a poet in Hyderabad.

Question 2.
What are some of Sarojini Naidu’s poems?

Answer:
Sarojini Naidu was a famous poet along with being the freedom fight. Due to her brilliant poems, she was named as the Nightingale of India. Some of her favourite poems are ‘Bazar of Hyderabad’, ‘The Golden Threshold’ and ‘The Bird of Times’.

Question 3.
Which are some of the freedom movements that Sarojini Naidu was a part?

Answer:
Sarojini Naidu took part in many freedom struggle movements. After getting inspiration from leaders like Mahatma Gandhi, Gopal Krishna Gokhale and Rabindranath Tagore, she joined the Indian National struggle. She took part in many of the freedom movements like Quit India Movement and Civil Disobedience Movements.

Question 4.
What are some of the women movements Sarojini Naidu was a part?

Answer:
Along with being a freedom fighter, Sarojini Naidu was a feminist. She took part in many women movements like prominent civil rights, women’s emancipation and women equality.