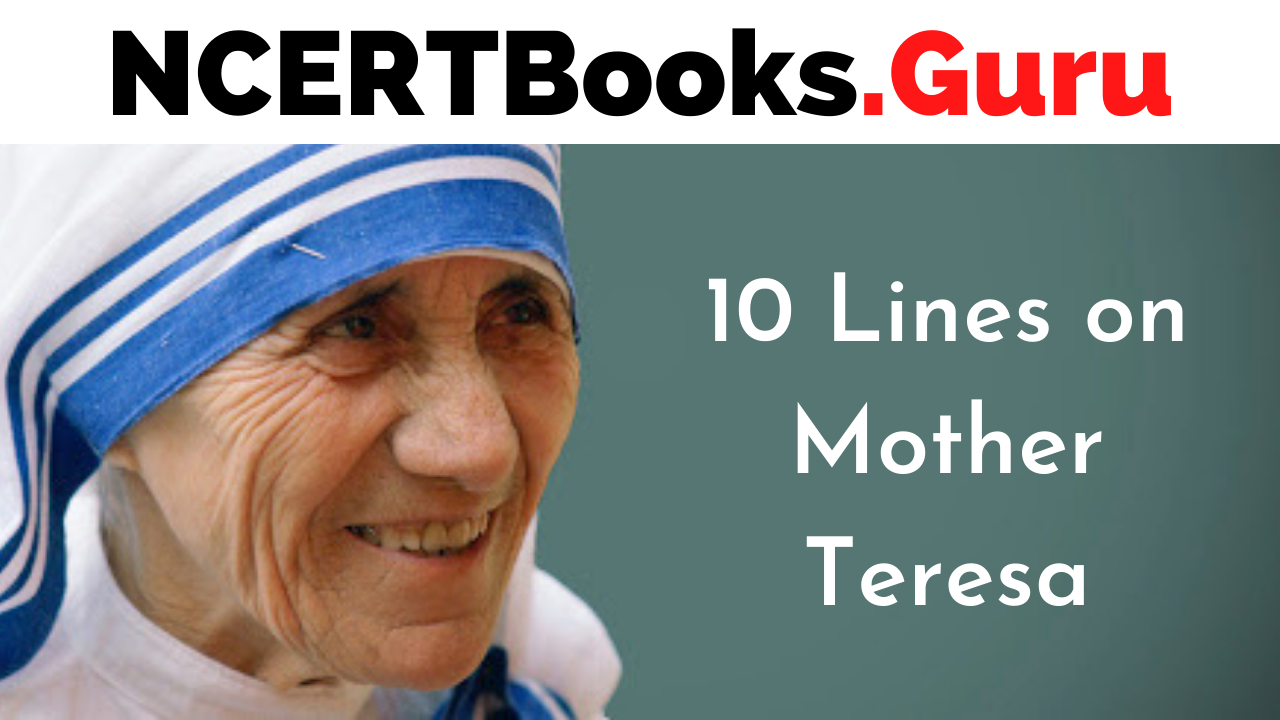 10 Lines on Mother Teresa: India is a mixture of diversity. Here all different categories of the people living in different states speak different languages. People have diverse lifestyle. They enjoy diverse festivals and have a unique financial and economic condition. Without any doubt, India has many examples of rich people. However, the country has many examples for the lower commercial people too. Calcutta is known to have most of the slum areas in the city. Slum people didn’t even get food to eat for a time in the day. Here is one such example for you who is famous with the name of Mother Teresa.

The complete name of this beautiful lady is Mother, Mary Teresa Bojaxhiu. Teresa got tagged as the Saint Teresa of Calcutta. Catholic Church honoured her for the same. She is a nun and a missionary from Albania who spent her eighteen years in Skopje. Later she turned to live in Calcutta, India. She lived much of her life here in India. At 38, she bid a goodbye to the religious robe and her sisters. She started living for nursing.

Today Teresa is paid respectful patronage on the Youth Day. This respect has been earned by her for serving her life for the sake of others. Also, she is tagged as Motherhouse of the missionaries of charity in Kolkata. In 1997, 13 September, her funeral service was eventually conducted. No doubt if she did not exist among us, but people never forget to recite her prayers, the guidance she provided, and the legacy that exists. To know more about her, read out three sets of ten on Mother Teresa. Surely these lines will be sufficient for the students to know about this legendary lady’s life history. 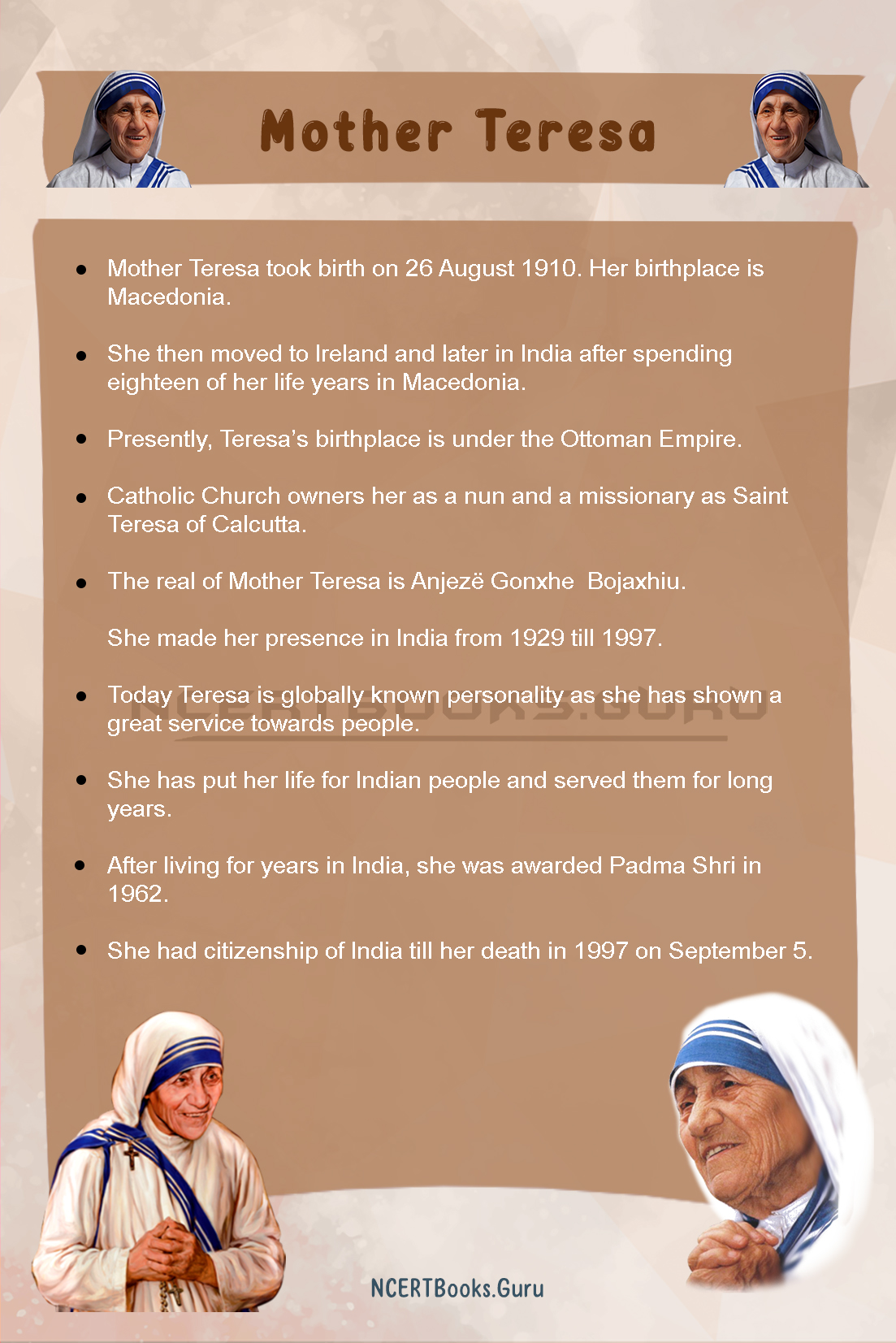 Set 3 stated on 10 lines on Mother Teresa is best suited for students in standard 9, 10, 11, 12, and students preparing for competitive exams. 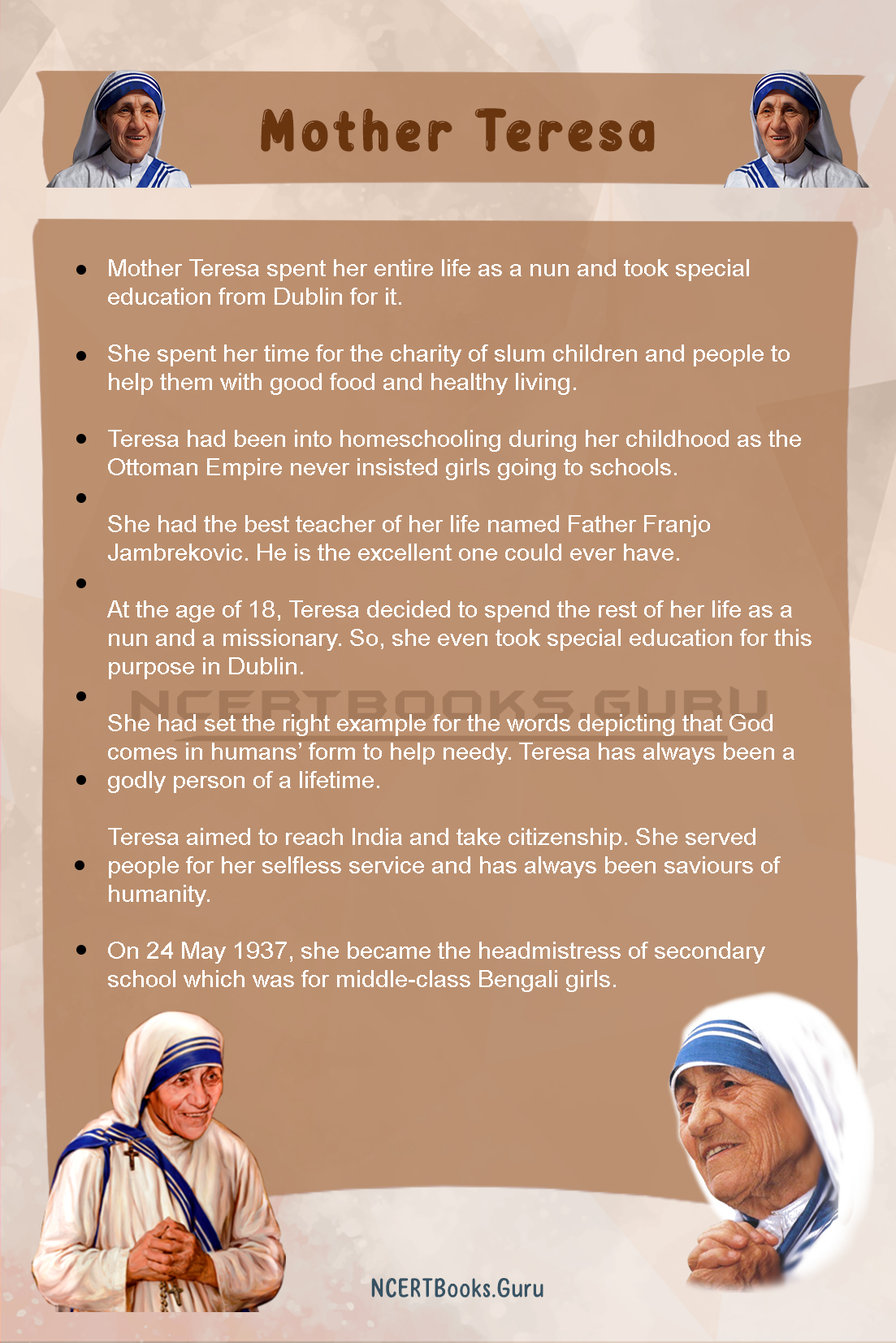 Question 1.
Does Mother Teresa belong to a wealthy family?

Answer:
Mother Teresa had a strong background since her childhood. She had been brought up in a Catholic family and thus famous throughout the world. However, she left Skopje for being a nun and took a special education in Dublin when she was 18. However, she moved to Calcutta to serve slum areas, and there she got named as Teresa.

Question 2.
From where did Mother Teresa get inspiration to server slum people?

Answer:
It was her inner consciousness which insisted her to serve slum people. Though Teresa always looked to live a religious life, she helped the poor and needy for inner satisfaction. She started teaching poor girls and got tagged as the headmistress of a middle-class Bengali girls school in 1937.

Answer:
Mother Teresa got inspiration from her mother for serving people. She had put her mind in various religious activities and got influenced by those prayers. However, these all were implemented by her when she became a nun and a missionary in India.

Question 4.
Which example did Mother Teresa set for us from her lifestyle?

Answer:
Mother Teresa had set a real-life example for those who believe that God does exist as humans. She led her life to maintain humanity, serving and spread love. Also, she always inspired us to follow the same and keep helping the poor and needy throughout life.