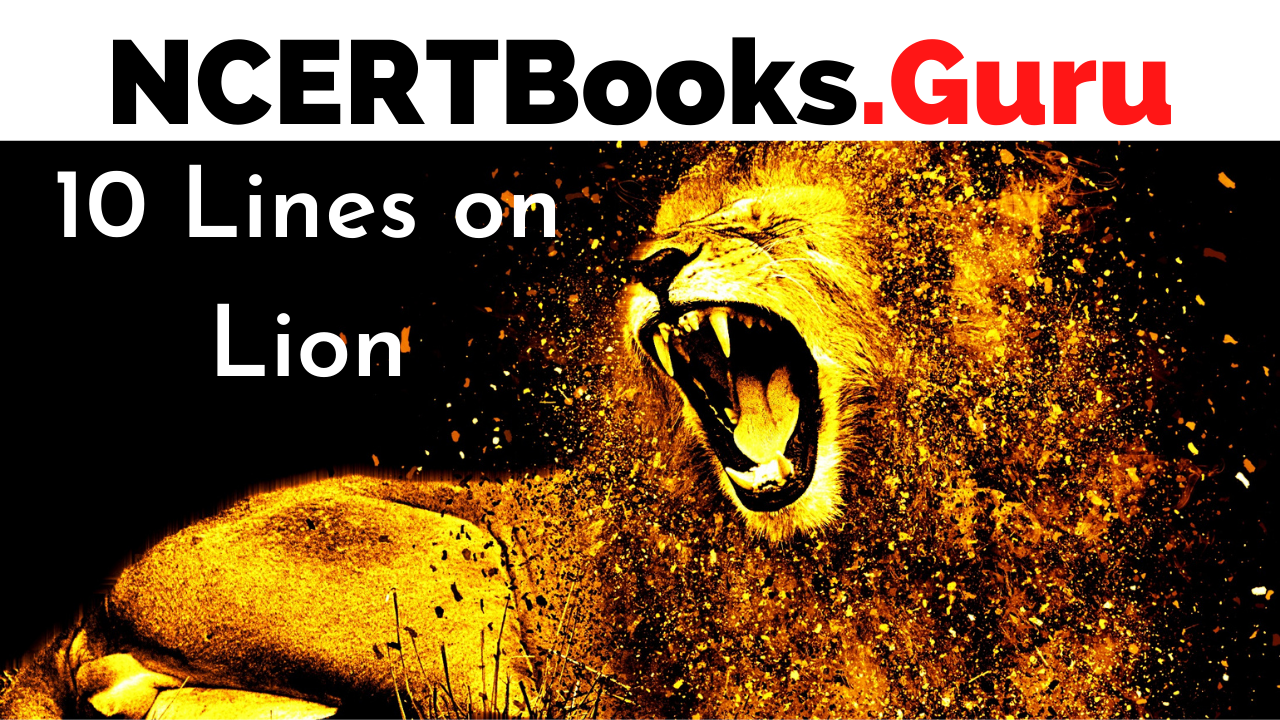 10 Lines on Lion: Lion, which also goes by the scientific name of Panthera Leo is an animal of the Kingdom Animalia. The lion belongs to the Felidae family of species. Lions are the creatures of the jungle or forests. Their natural habitat is the deep forest covers. The lion is an animal of great strength and power and is considered the King of the jungle. The lion is a flesh-eating animal and is a member of the carnivore family. Lions live in dens and are habituated of eating by preying on other animals of the jungle.

A fully grown male lion can measure up to 184-208 cm in length, whereas a female lion can measure up to 160-184 cms in length. Female lions are shorter than male lions. Lions are social animals, and they live in groups. A group of lions is called a pride. They hunt in pride and prey on large mammals. The lion is considered the apex predator of the jungle.

Lions are found mainly in Africa and Asia. They live in the grasslands and savannas. Lions are day animals, but in some cases, they can be active even at night. Lions signify strength, power, and courage. Kings used to hunt lions and keep their skins to show the competitors their power and fearlessness in ancient times.

Lions have a muscular build, deep-chested body, and they have a tuft at the end of their tail. Male lions have an eminent mane. Lions have long and sharp teeth, that helps them to tear through the flesh of other animals. The Lion’s symbol is one of the most recognized symbols in human culture, which signifies fearlessness and bravery. 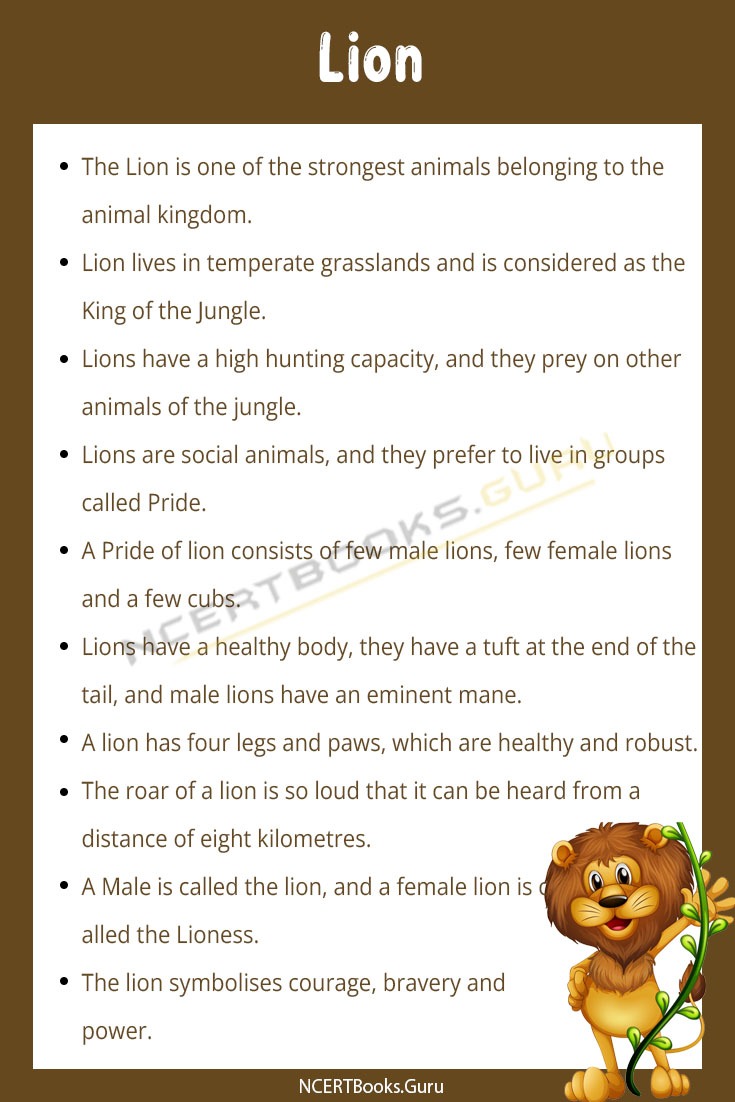 This set is for the students of class 6, 7, and 8. Here we have provided some more details of the lion, which would help the students learn about the animal.

This set is specially provided here for class 9, 10, 11, and 12. Here we have provided some more details of Lions. 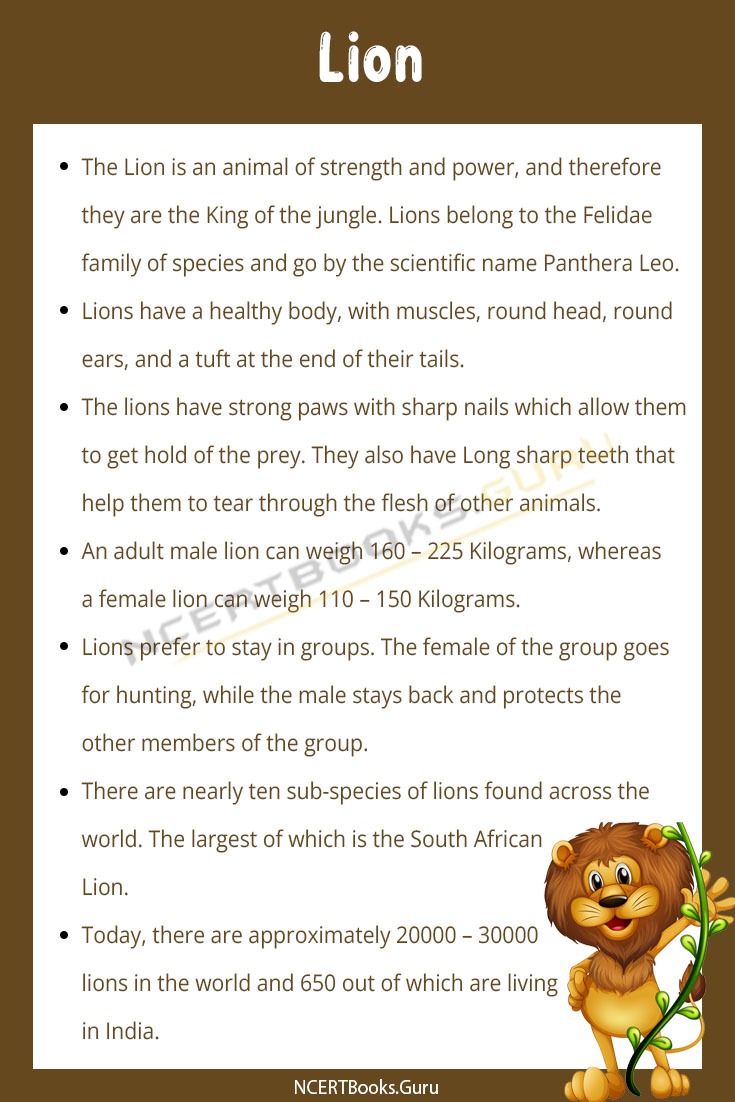 Question 1.
Where can we find Lions?

Answer:
Lions prefer living in caves or dens in grasslands or savannahs. They are found in parts of Eurasia, Africa and North America. Besides this, we can also see lions in zoos and wildlife sanctuaries.

Question 2.
Why is the lion used as symbols in human culture?

Answer:
Lions are the strongest animals of the animal kingdom. They have great strength and power. The symbolism of the lion is famous in the human culture because, it signifies, fearlessness, courage and Pride.

Question 3.
Describe the Physical features of a lion.

Answer:
Lions have a strong physique. They have rugged muscular build with a deep-chested body. The paws of a lion are healthy and powerful, and they have long sharp nails and teeth that help them capture and tear through the flesh of their prey. The males of the group have an eminent mane. The darker the colour of the mane, the older is the lion.

Question 4.
What is the population of Lion?