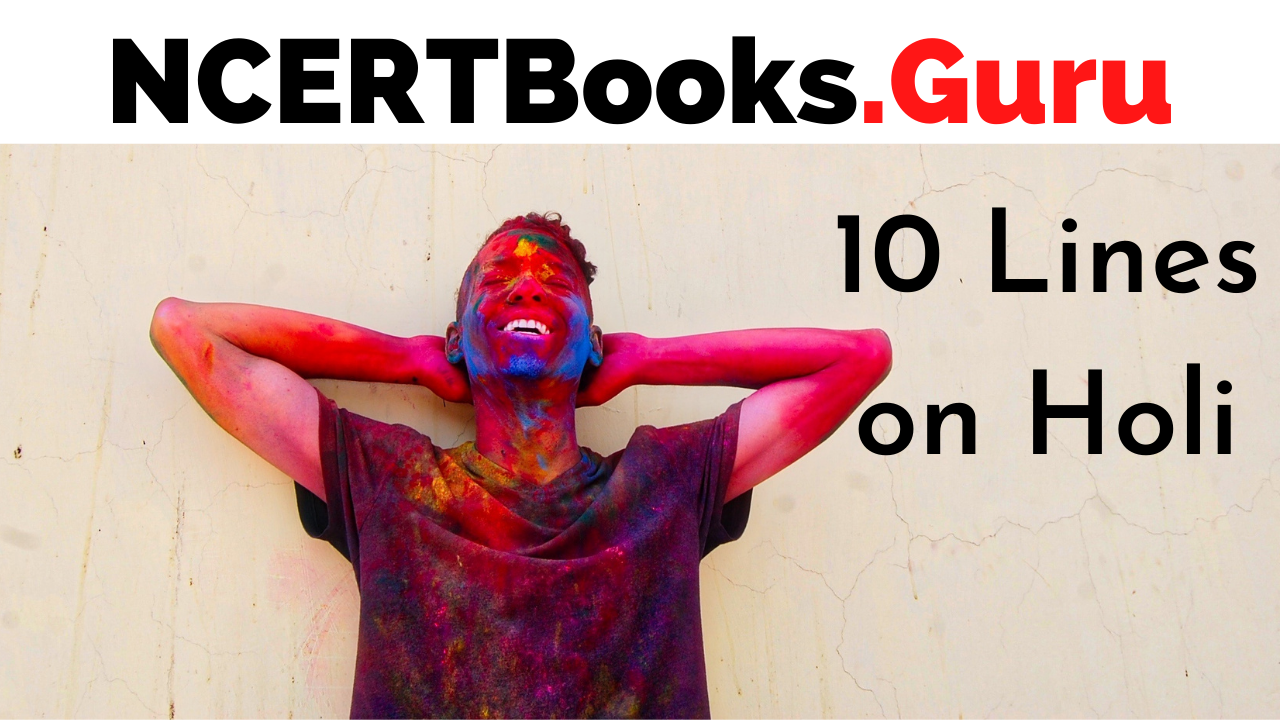 10 Lines on Holi: Holi is also known as the festival of colours and is celebrated by people all over India, to bring in the season of spring by covering one another in colours and spreading joy. While this is the significance of Holi, it also has cultural significance for those belonging to the Hindu religion.

The day before Holi, the festival of Choti Holi (small Holi) is celebrated by burning a bonfire and throwing peanuts, popcorn, etc. into the fire. This bonfire denotes the burning of Holika, the sister of a King who thought himself to be a god. This bonfire signifies the prevailing of good over evil and is thus celebrated as the same. Thus, Holi is celebrated for two major reasons, for the bringing on of the season of spring after the winters have ended, and for the prevailing of good over evil through the burning of Holika in the bonfire. 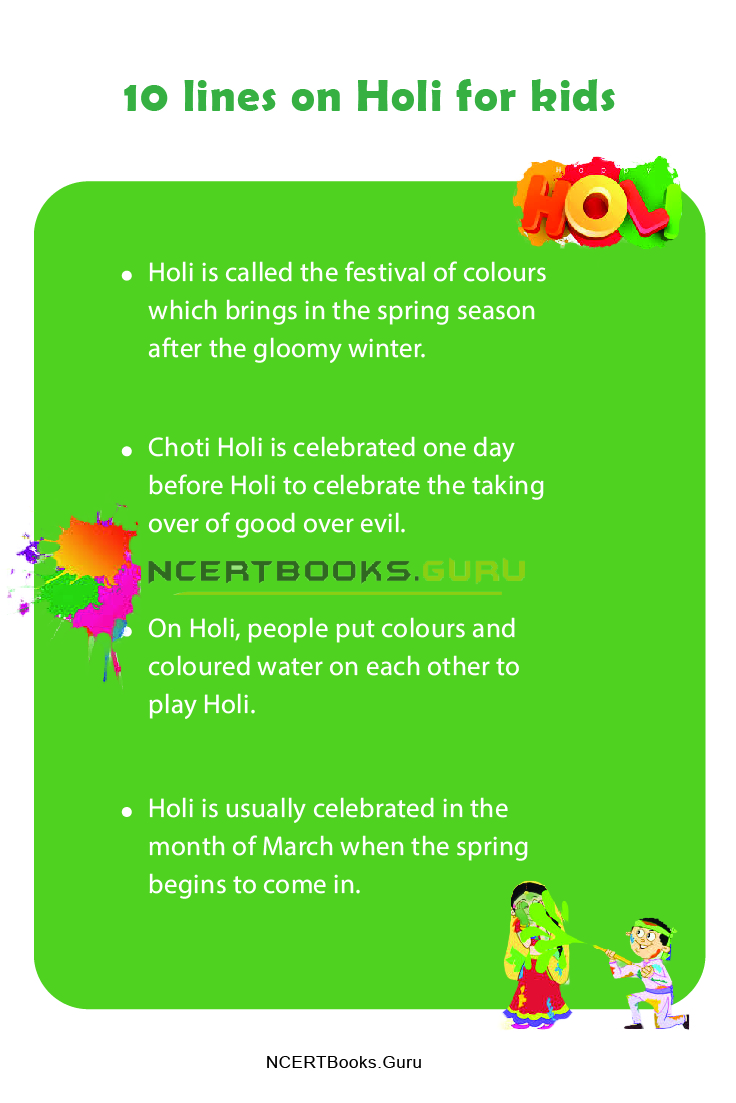 The following set of 10 Lines on Holi for middle school will be suitable for students of classes 7, 8, 9 and 10.

The following set of 10 Lines on Holi for senior school will be suitable for students of classes 10, 11 and 12. 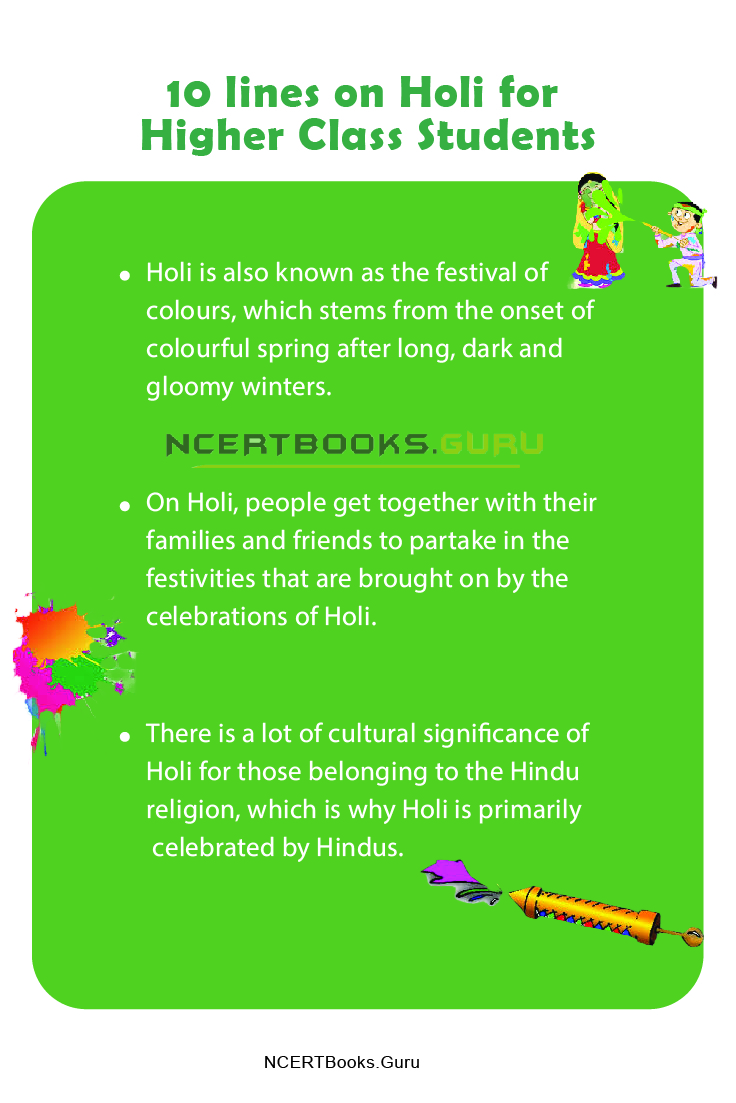 Question 1.
Why do we celebrate Holi?

Answer:
Holi is celebrated for three possible reasons, where two of them stem from Hindu culture while the other reason is purely a seasonal reason. Holi is the festival we celebrate at the onset of the spring season right after the winters have passed, and this is celebrated with the colours of spring that winter does not possess. Further, Hindu legend goes on to say that Holi signifies the prevailing of good over evil with the story of Holika. Hindu legend also says that Krishna first played Holi with Radha so that she would love him even after his skin turned blue after he was poisoned.

Question 2.
Why is Holi called the festival of colours?

Answer:
Holi is called the festival of colours because on the day of Holi, we smear each other with colour and we throw coloured water on one another. It also signifies the oncoming of the colourful and bright spring season after moving past the gloomy and dark winters.

Question 3.
Do all religions celebrate Holi?

Answer:
Holi is primarily a Hindu festival because of the legends that are associated with it. However, people from any religion may come and partake in the Holi celebrations, because it also signifies the oncoming of spring and its main purpose is to spread love and joy.

Question 4.
Who was Holika?

Answer:
Holika was the sister of King Hiranyakashipu, who was the king of Asura, the land of all evil. He was invincible and couldn’t be killed by anyone, no man, no animal, and he considered himself to be a god. However, his son still continued to worship Lord Vishnu, which infuriated the King. His sister, Holika, put on a cloak and set foot into a burning pyre, and she tricked her nephew to enter with her. However, the wind blew her cloak away to the nephew’s shoulders, and she, instead, burned alive while he survived. Thus, the day before Holi is celebrated as Choti Holi where a bonfire is burnt to signify the death of Holika, and the prevalence of good over evil. The festival Holi is also named after Holika.