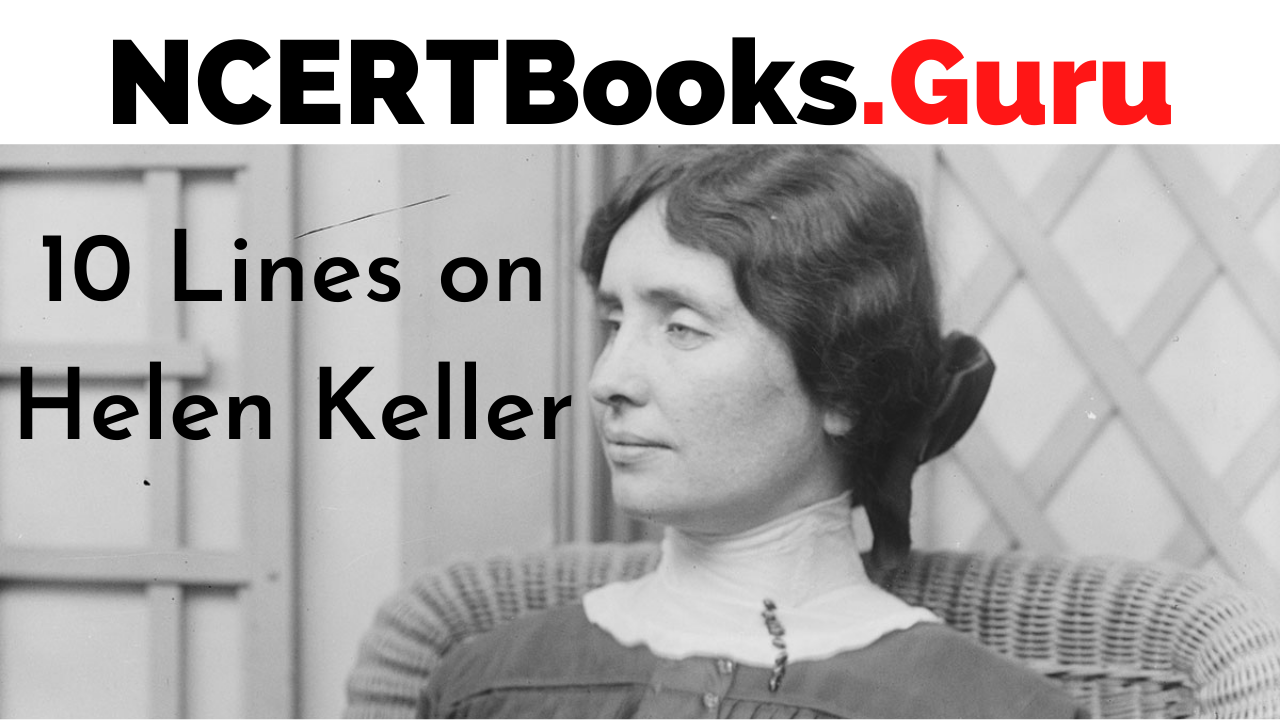 10 Lines on Helen Keller: The role of literature and art in framing society is inimitable. The literature and arts have given us many authors and poets whose writing gave us a new light of exploration. In other words, literature is something that can even cast a soul in a static object. Helen Keller is one of the prestigious names in the book of famous authors for their mortal writings.

On June 27, 1880, the world witnessed the birth of one of the most incredible authors, Helen Keller, in West Tuscumbia, Alabama. She was one of the well-known disability rights advocate, a lecturer, and a political activist. She is one of the most famous personalities of America, who dedicated her life to her writings.

She wrote more than 14 books, hundreds of essays, and speeches on every motherly earth element. Helen Keller’s life was not easy; she had to travel a long stormy journey to achieve her desired success. Her illness ruthlessly drove out her hearing and visual qualities and left her in a pool of sorrow and depression. Nevertheless, she fought the battles of life to conquer the throne of success. In this article, we have presented sets of 10 lines to give you a glimpse of Helen Keller. 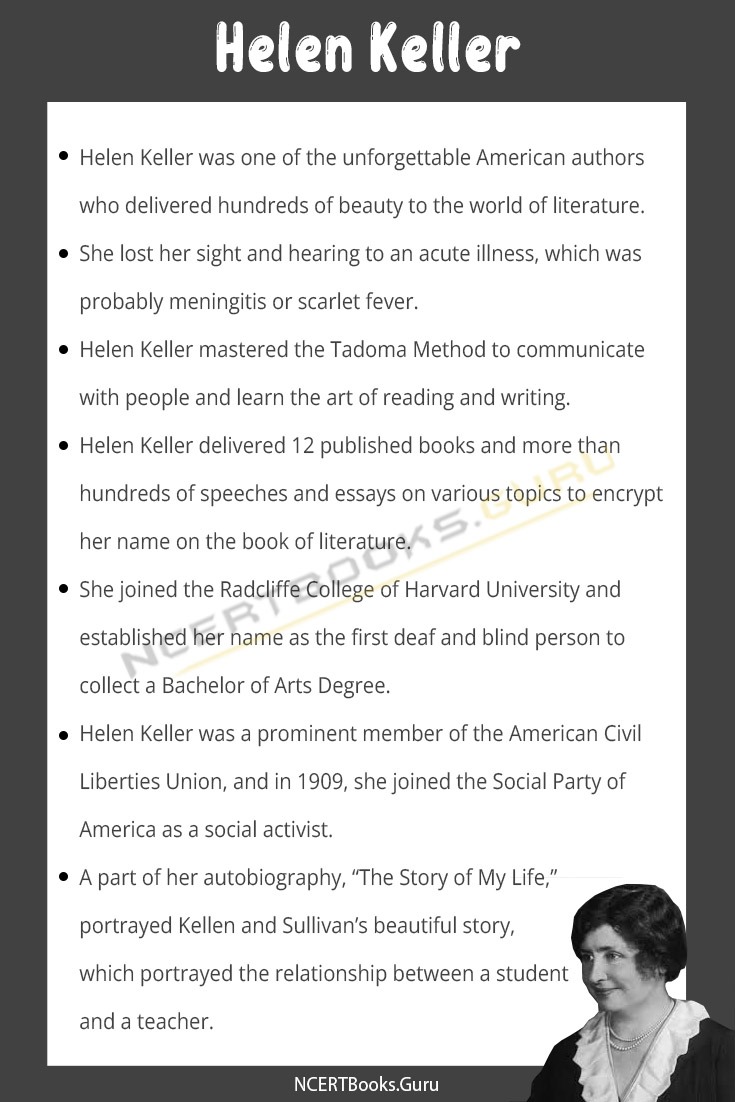 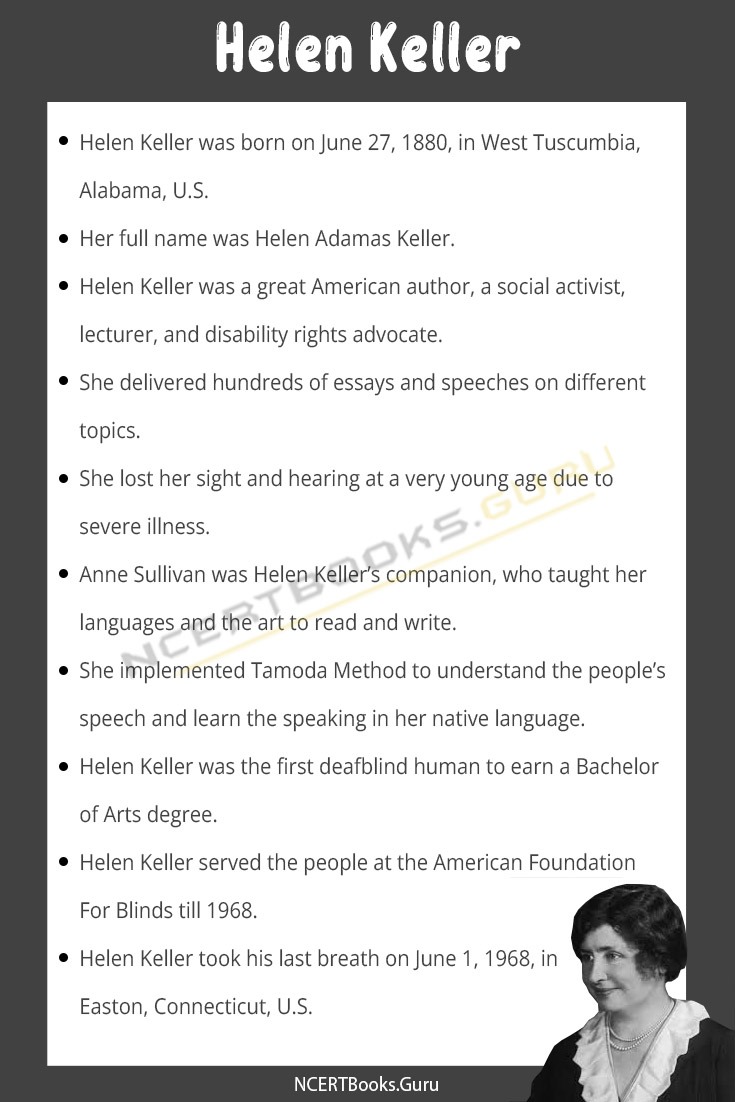 Question 1.
Who was Helen Keller?

Answer:
Helen Keller was one of the prominent names in the list of American authors who left a mark on the literature field. She was not only an efficient author but also a social activist and an educator. She was one among the strong souls who fought every difficulty of her life to establish herself as the best. Helen highlighted herself as the first deafblind person to receive a Bachelor of Arts Degree.

Question 2.
What is Helen Keller’s contribution to Art and Literature?

Answer:
Helen Keller was one of the greatest American authors who delivered mind-boggling pieces of writings. She wrote 12 published books and hundreds of essays and articles on topics ranging from the earthly elements to the great leaders like Mahatma Gandhi. Some of her famous workpieces are – “The Story Of My Life,” “My Religion,” “The Frost King.”

Question 3.
How was Helen Keller honoured after she diminishes?

Answer:
Helen Keller took her last breath on June 1, 1968. This was a moment of grief and sorrow in the literature world. To honour her, June 27, the date of her birth, was marked as Helen Keller Day in Pennsylvania, and her birthplace was converted into a museum.

Question 4.
Mention some of the humanitarian activities of Helen Killer.

Answer:
Helen Keller started her journey as a social activist in 1924 when she joined the American Foundation for the Blinds. In 1909, she connected to the Social Party of America to lead her work as a humanitarian. She was a prominent member of the American Civil Liberties Union and an efficient supporter of the NAACP.