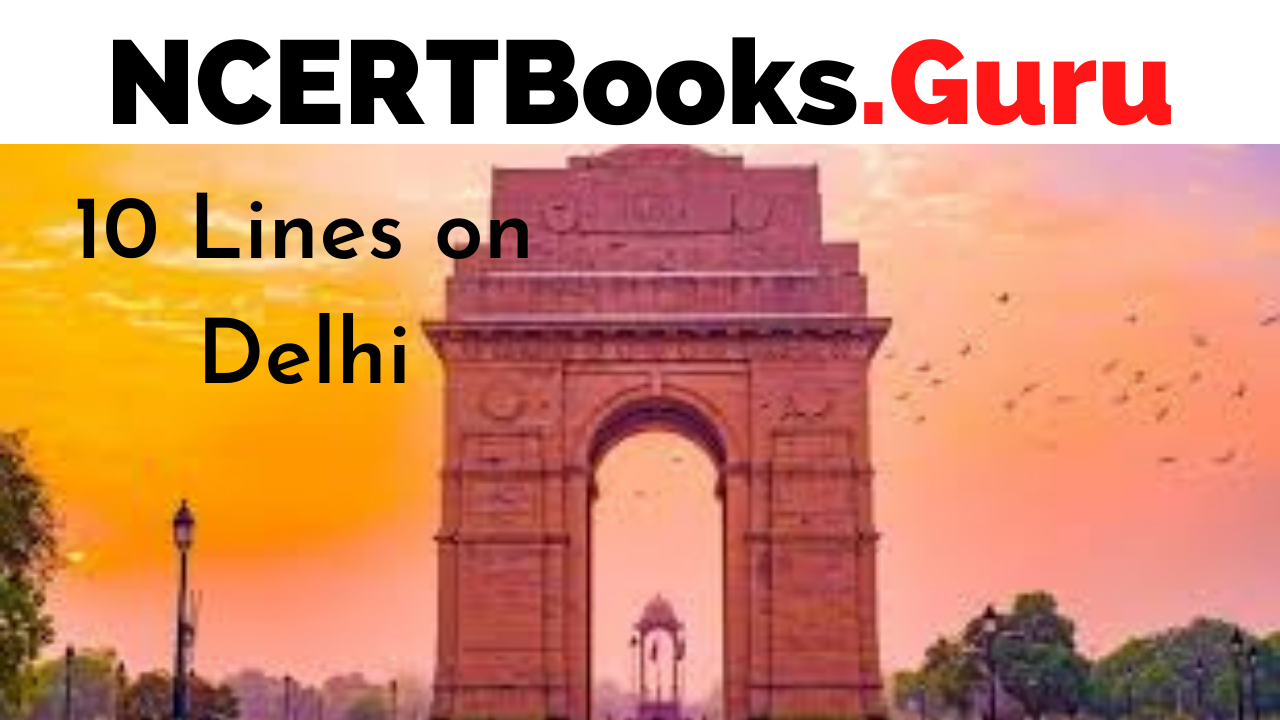 10 Lines on Delhi: Delhi is the capital of India and was recognised as a Union territory in the year 1956. It was officially declared as the capital of India after the Independence in 1947. Delhi has been a place of historical importance since the beginning when the Pandavas ruled in the city, which was then called Indraprastha.

Delhi is presently the second wealthiest city of the country after Mumbai. The Delhi-NCR region includes the neighbouring cities of Gurgaon, Noida, Faridabad and Ghaziabad. Every year students and people of the working population come to Delhi in search of better opportunities. The city boasts some of the country’s finest universities and colleges.

The NCT or National Capital Territory of Delhi is a city containing New Delhi, the capital of India. The city is bordered by Haryana on three sides and shares border with Uttar Pradesh on the eastern side. The total population of the city is roughly 30 million. The city is home to all the major bureaucrats and the high ranked government officials. The three arms of the government – the Legislative, the Executive and the Judiciary are located in the city.

Delhi also boasts some of the important cultural heritage sites of the country such as Red Fort, Qutub Minar, Humayun’s tomb, Jama Masjid, India Gate, Akshardham temple, Agrasen ki Baoli etc. The city is also home to the headquarters of almost all government agencies. Given below are sets of 10 lines about Delhi. Students or anyone can use this information in discovering more about the city.

The first set is meant for the students of primary classes from 1-5. It gives basic information about the city. 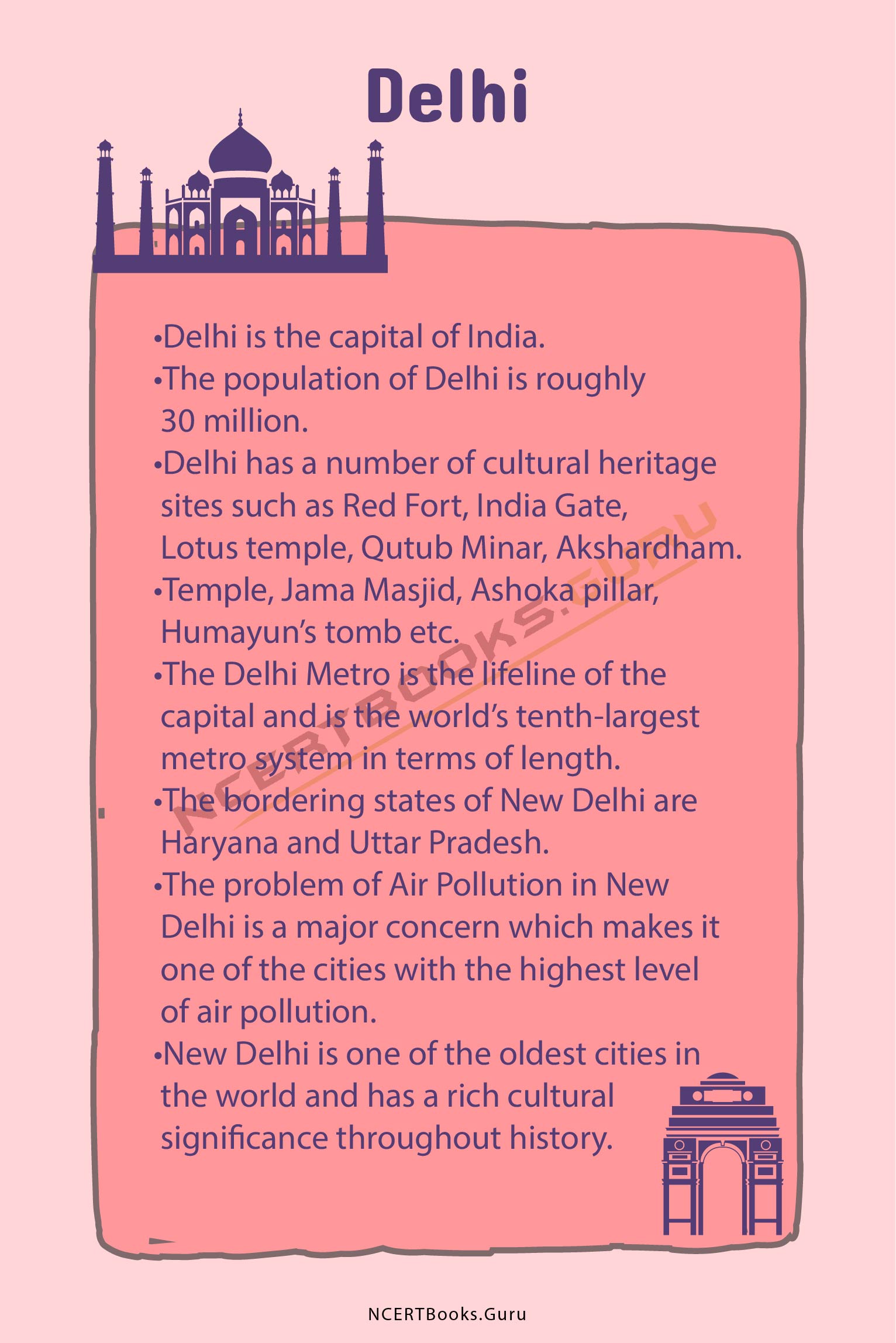 The second set gives a detailed analysis of the city. This set is meant for the students of class 6-10.

The third set provides an in-depth picture of the city and about its history. The set is meant for senior secondary students and higher. 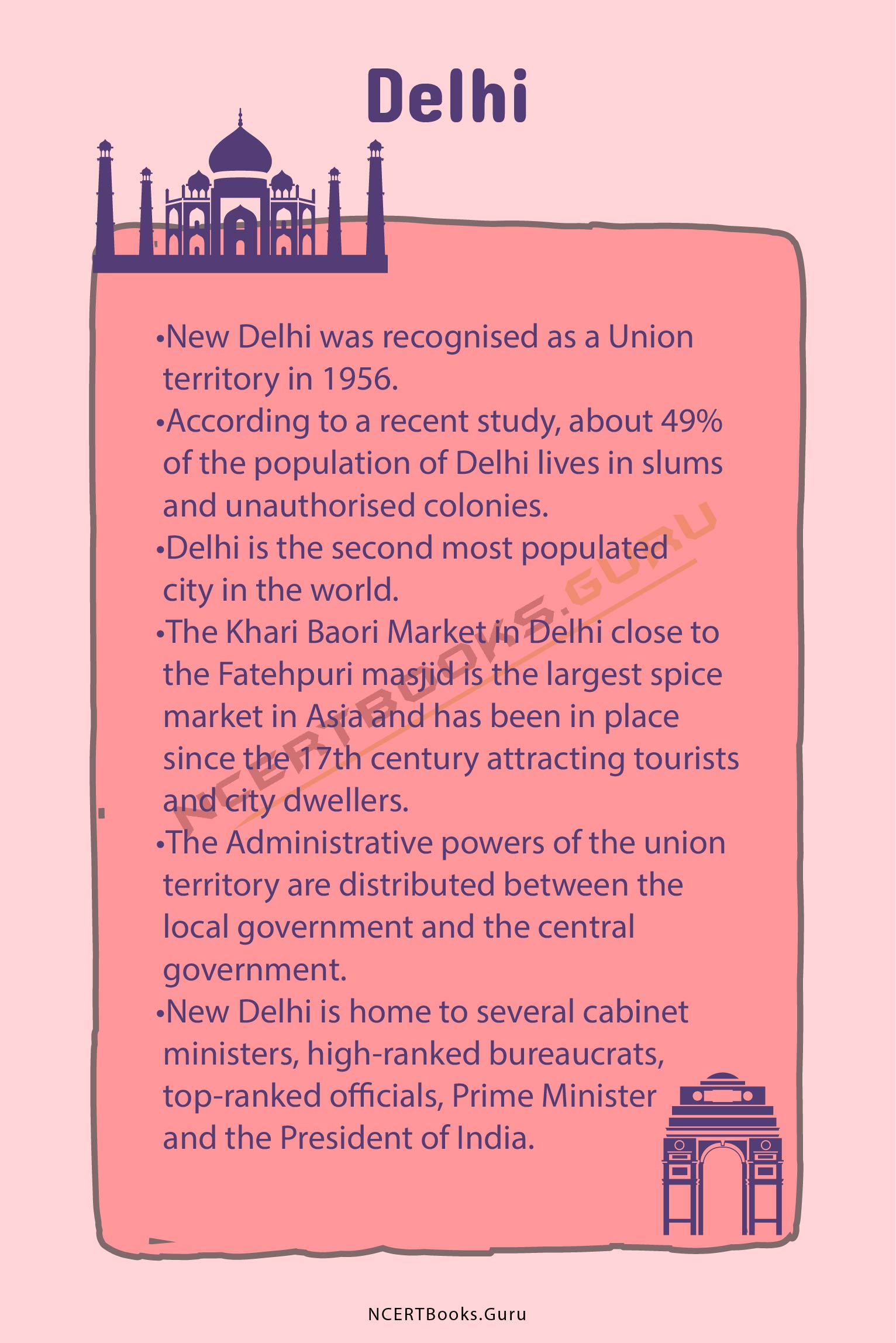 Question 1.
What are the main causes of air pollution in New Delhi?

Answer:
The toxic quality of air in New Delhi is the effect of several reasons.

Answer:
The Delhi Metro Rail Corporation is the nodal authority responsible for the metro system in the capital. The first corridor opened in 2002 from Shahdara to Tis Hazari. The present metro system is 389 kilometres long with a total of 285 stations. The rail system moves underground, elevated and on the ground level in different regions.

The Delhi Metro Rail Network has expanded to the neighbouring regions of Noida, Ghaziabad, Gurgaon, Faridabad, Bahadurgarh and Ballabhgarh. Apart from providing a reliable mode of the transport system to the people of the capital, the Delhi Metro Rail Corporation also works to reduce the amount of air pollution in the air. It reduces greenhouse emissions by 6.3 lakh tons every year and also has solar panels set up on the roofs of stations.

Question 3.
What are some of the heritage sites located in Delhi?

Question 4.
Comment on the historical significance of New Delhi.

Answer:
The capital of the country has a rich and significant historical background and has been ruled by some of the most powerful emperors. The historical pieces of evidence trace back to the Mahabharata Period. The city was called Indraprastha where the Pandavas used to live.

The city has gone from being ruled by Hindu kings to Muslim emperors from one ruler to another. In 1803, the Britishers claimed control over the city and later shifted their capital from Calcutta to New Delhi in the year 1911. After the Independence of India, New Delhi was officially declared as the capital of the country.