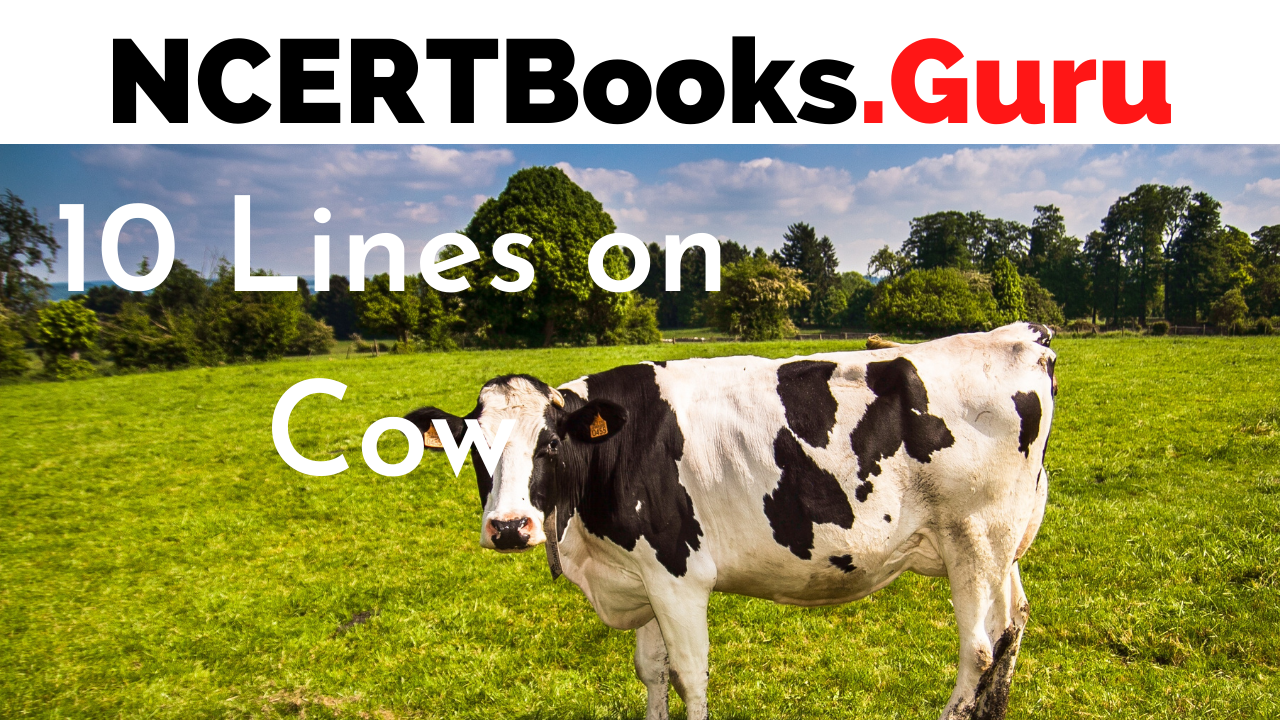 10 Lines on Cow: Cows are one of the most commonly domesticated hoofed animals. They are bred for their milk which is further used in the production of dairy products. Milk is used in the preparation of cheese, curd, cream, sweets and various other food items. It is rich in calcium, vitamins and is a rich source of protein. It is advisable that younger children should drink a glass of milk daily to help them fulfil their daily protein intake required for their growth.

In this article, we will discuss about Cow, its importance and significance in our lives. We will also look at the special characteristics that allow it to survive. Cows also have a religious aspect connected with them. According to Hindu mythology, Cows are worshipped as “Gau Mata”, where gau means Cow and Mata means mother. It is given the status of the mother and therefore is worshipped as per the Hindu scriptures.

Much like other domesticable animals, Cows are herbivores and require a good amount of fodder daily. It feeds upon grass, plants, vegetables and leaves. Its digestive system is also specially adapted for the digestion of plants. Cows have a large mouth and a long oesophagus which allows them to eat a large amount of food in a single time. This is really helpful in the wild as it allows the cow to feed quickly as the head-down position is vulnerable.

Cows are domestic animals which give us milk. They are also bred for their meat but are primarily used for the production of milk which is further used in the preparation of dairy products. The dairy industry is a profitable business and cows are an important aspect of it. Cows have a big mouth, a long tail, four legs, a pair of eyes, ears and horns.

Its big mouth and specialized teeth allow it to chew its food in a circular motion. Cow re-chews its foods several times and also its four-chambered stomach allows the breakdown of complex plant fibres.

Given below are three different sets of 10 lines on Cow. These can be used according to the purpose they serve.

This set is for primary level students. It contains basic and simple information about cows and their importance. Students below class 5 can use this information and it will serve their purpose well. 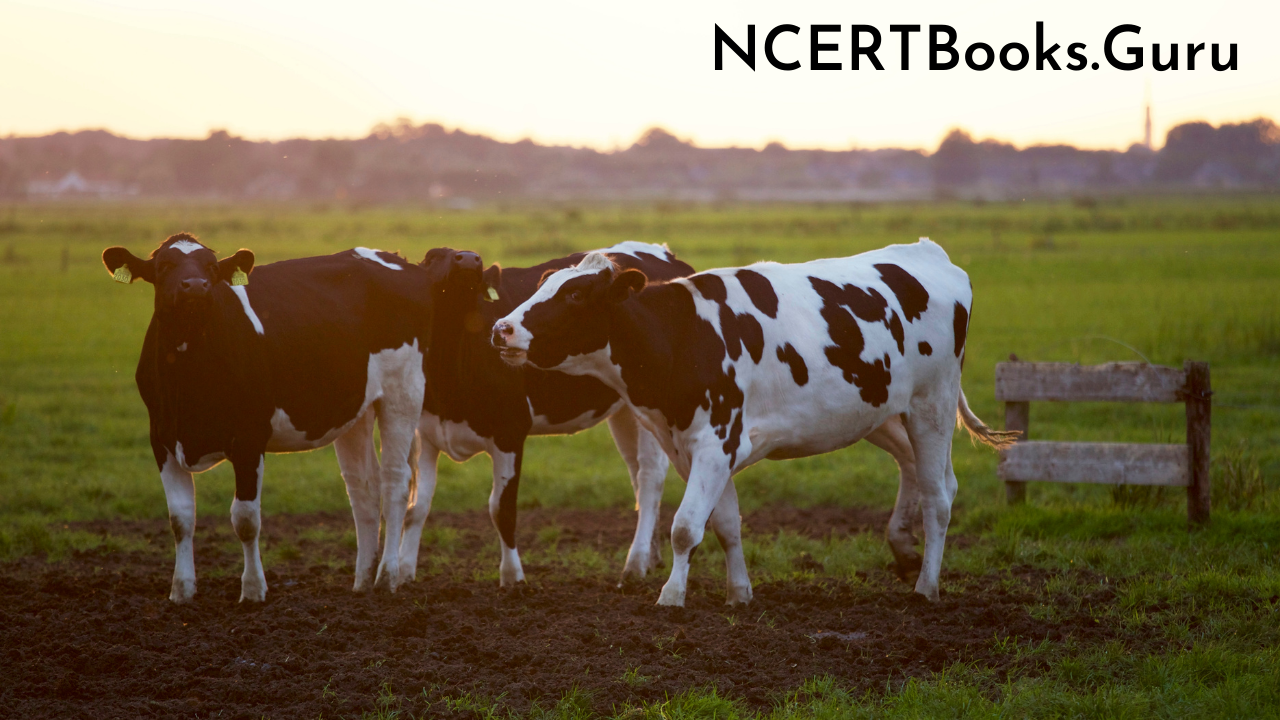 The second set contains detailed information about Cow. It is intended for use by students form class 6-10.

This set is for students of higher classes who require additional information about Cow. It contains biological and scientific facts and data about Cow 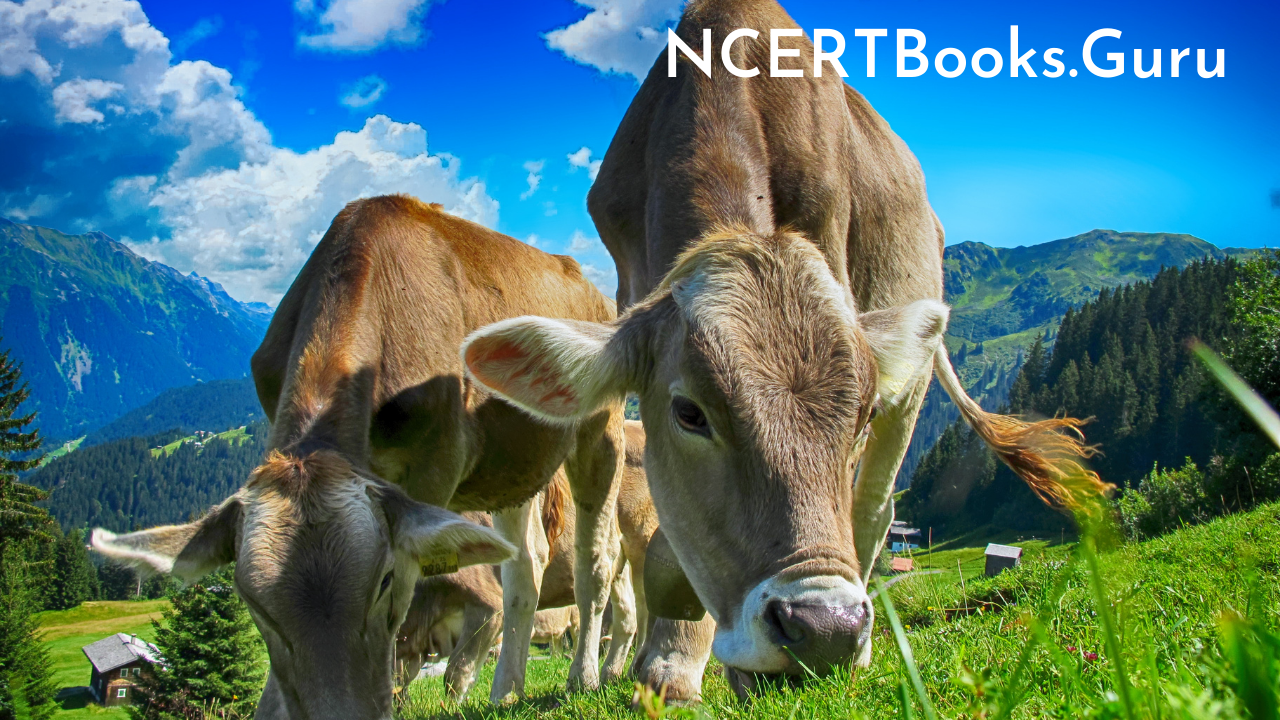 Question 1.
Give a brief account of the physical characteristics of the Cow?

Answer:
Cows have four legs which support their weight, a long tail, a big nose, a pair of eyes, ears and horns, one big mouth and specialized teeth for chewing and eating purposes. It also has a specialized digestive tract which allows it to re-chew its food. Its stomach is four-chambered to allow digestion of plants.

Question 2.
What are some different breeds of Cow?

Question 3.
What are the common uses of Cow dung?

Answer:
Cow dung is the waste product of Cows. It is commonly used as:

Question 4.
Give an account of the domestication of cows and economic production.

Answer:
As of 2016, around 1 billion cows were estimated with India, Brazil and China leading the list. Cows were first domesticated as all-purpose domesticable animals for milk and meat. Two broadly recognizable species of cows are- zebu or the humped cattle and the other one without humps.

Cows are interbred to obtain species with the advantage of both. Due to the advances in science and technology, cows with the capacity to produce more milk are bred and the milk is obtained with the use of machines.