Question 2.
The head of the government in Nepal is the:
(a) President
(b) Prime Minister
(c) King
(d) Vice President

Question 3.
In which case was the real power with external powers and not with the locally elected representatives?
(a) India in Sri Lanka
(b) US in Iraq
(c) USSR in Communist Poland
(d) Both (b) and (c)

Question 9.
Some of the drawbacks of democracy is
(a) Instability and delays
(b) corruption and hypocrisy
(c) Politicians fighting among themselves
(d) all the above

Question 12.
The most common form that democracy takes in our time is that of
(a) Limited democracy
(b) representative democracy
(c) Maximum democracy
(d) none of the above

Question 13.
Which of these is an example of perfect democracy?
(a) USA
(b) UK
(c) India
(d) None of the above

Read the Cartoon (From the NCERT Textbook)

Question 1.
Look at the Cartoon (From the NCERT textbook on page 25) given below: 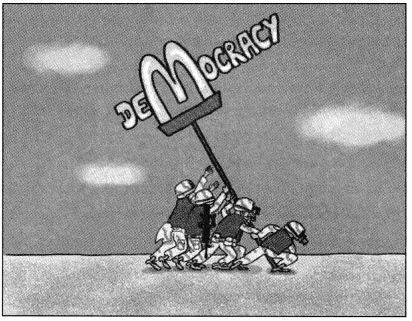 This cartoon was drawn when elections were held in Iraq with the presence of US and other foreign powers. What do you think this cartoon is saying? Why is ‘democracy’ written the way it is?

Question 2.
Look at the cartoon (From the NCERT textbook on page 27) given below: 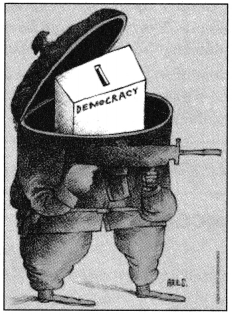 This cartoon was drawn in the context of Latin America. Do you think it applies to the Pakistani situation as well? Think of other countries where this would apply? Does this happen sometimes in our country as well?

Question 3.
Look at the cartoon (From the NCERT Textbook on page 28) given below:

This cartoon was titled ‘Building Democracy’ and was first published in a Latin American publication. What do moneybags signify here? Could this cartoon be applied to India?